Does A Cat’s Personality Change After Having Kittens?

If your cat seems to be acting differently after birth you may be wondering if this is expected behavior, or not…

Does a cat’s personality change after having kittens?

Your cat’s personality can change after having kittens because of the hormones. The mother cat (often called the queen) will have maternal hormones in her body after delivering her kittens. Maternal hormones can impact how your cat acts, making them extremely protective of their kittens.

Contents show
1 Does a cat’s personality change after having kittens?
2 What should you provide for your cat after it has kittens?
3 Do all cats instinctively feed their kittens milk?
4 Will my cat care if I give her kittens away?
5 Will a mother cat get aggressive if you approach their kittens?
6 How do cats act after having kittens?
7 Why do cats change after giving birth?
8 Do cats become more affectionate after pregnancy?
9 Do mom cats love their kittens?
10 Why is my cat meowing at me after giving birth?

What should you provide for your cat after it has kittens? 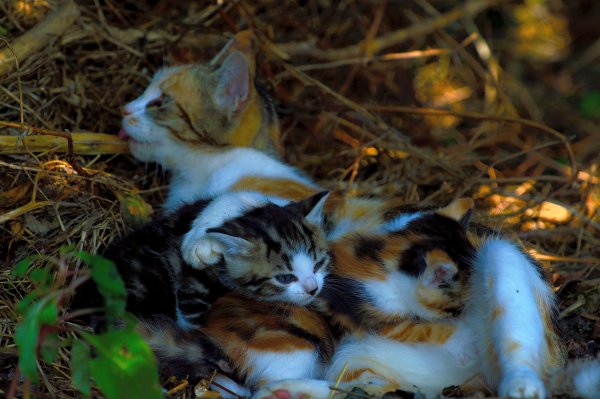 A cat and its litter of kittens in the bush.

Even if you have a close relationship with your cat, they still require a safe space to nurse their kittens.

Kittens require warmth, so provide them with thick blankets. Heated blankets on low settings can emulate the heat kittens receive from their mother. These can be helpful when weaning kittens from their mothers.

Do all cats instinctively feed their kittens milk?

Cats instinctively feed kittens milk because it is ingrained in their memory. This natural behavior occurs because they are born with this knowledge after being fed by their mother when they were a kitten. Similarly, after birth, kittens will instinctively smell for their mother’s milk.

It is uncommon for queens not to exemplify maternal behavior, but it can happen if the cat is not born with maternal instincts. Immature females who give birth too young are unable to raise kittens appropriately. They do not have the skills to raise kittens and feed them.

Will my cat care if I give her kittens away?

Your mother cat will not care if you give her kittens away since cats do not form close bonds with their offspring like humans. It is better to slowly wean your kittens from their mother because they require learning lessons from their mothers in their early weeks of life.

If you allow your cat to raise the kitten and slowly wean them from its presence, it is better because they will have the support of their mother in the first few months of life.

In the first few months, they learn fundamental lessons from their mother, like how to clean themselves and communicate with their litter mates. They must stay with their mother for these few months so they can learn from them but after the mother will not mind if you give them away.

Will a mother cat get aggressive if you approach their kittens?

A mother cat will become aggressive if they get approached with its kittens around. The behavior stems from her maternal aggression, a normal behavior that occurs after the queen gives birth to their litter of kittens.

Trust is an essential factor when approaching a queen’s kittens. When you have a close bond with your cat, they are more likely to react well when you approach their newborn kittens. The mother cat is more likely to respond aggressively if they do not trust you.

How do cats act after having kittens?

Many cats act differently after having kittens. Initially, cats can be aggressive after giving birth to kittens because of inherited maternal aggression. They can become protective and act differently toward you because of this newfound motherly role.

Conversely, because of their maternal role, they might become more loving.

Your cat might go through a behavioral transformation throughout their pregnancy. Cats become more affectionate during pregnancy, then slightly aggressive after giving birth due to the increased need to protect their kittens.

Why do cats change after giving birth?

The main reason cats change after giving birth is because of their changing hormones. The hormones changing in their system can cause new behaviors, like increased affection or aggression. 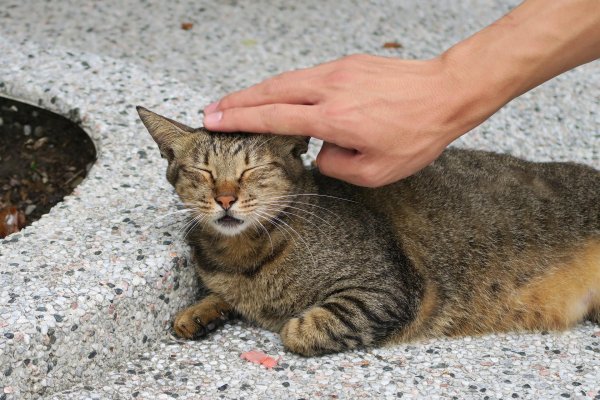 A person stroking a brown cat.

Most female cats become more affectionate in the first few weeks of pregnancy as they prepare to birth their kittens. Around four and five weeks pregnant, your cat may begin demanding attention from you.

Mother cats may become more affectionate after giving birth. The time they spend bonding with their kittens can cause long-term effects like becoming more loving toward their owners.

Do mom cats love their kittens?

Mother cats do not have an instant bond with their kittens, but they will certainly recognize them as members of their pack. The queen will recognize her kittens as her own and treat them with compassion. However, it is uncommon for mothers to develop strong feelings toward their kittens because they realize the need to detach themselves at roughly twelve weeks old.

Cats are born with the ability to maintain an independent social structure and separate themselves after birth to survive on their own.

Why is my cat meowing at me after giving birth?

Mother cats who meow after giving birth want recognition for their excellent work. After all, it is a magnificent accomplishment to give birth to a litter of kittens. If you have a close relationship with the cat, it is more common for her to seek your approval after giving birth.

She will want attention and praise because of the effort she went through to deliver her kittens.

Queens might remain stimulated for several hours before eventually calming down. Sometimes, it will take 48 hours for her to calm down, but it should not take long.