If you have noticed that your cat is being mean to its kittens it may alarm and concern you. And, make you wonder why, and what can be done about it…

Some behaviors that cats show towards their kittens may seem to mean to us, but they are harmless and are induced by feline instinct. For example, mother cats may leave their kittens for a short time to get some sleep. They might also nibble on their kittens to groom them, which might look like they’re biting their kittens from a distance.

In some cases, cats who have recently given birth may be a little standoffish or aggressive because of the hormones she is experiencing, and that should dissipate within a few weeks at the most.

In rare but potential circumstances, your cat might ignore a kitten who she believes won’t survive. This is part of feline instinct, even though it seems cruel, and she does this in an effort for a mother to keep her other kittens safe.

Is It Normal For A Cat To Be Mean To Its Kittens?

It’s normal for it to appear as though mom cats are being mean to their kittens, although they aren’t always intentionally being mean. Mother cats will often pick up their kittens by their scruff, as well as playfight with them to teach them how to defend themselves.

However, cats can experience temporary maternal aggression shortly after they give birth as a result of the hormones that change rapidly. They may seem more dismissive of their kittens, but will usually still give them the basic care they need.

What Should I Do If My Cat Is Being Mean To Its Kittens?

So long as your cat isn’t physically harming a kitten or isn’t refusing to feed them, you don’t have to interfere with mom and her kittens. She knows what she is doing, and it’s not typical for a cat to intentionally hurt her kittens.

If your cat does seem to be causing physical harm to her kittens, you should step in and remove the kitten from her grasp. This should only be done in cases where you can confirm that she is actively hurting her kitten, as she will likely be very unhappy that you’re interfering.

Should I Discipline My Cat For Being Mean?

Disciplining a cat for being mean isn’t going to change any of her behavior; in fact, you could end up making the situation worse. Mother cats are protective, and they will try to scare you off with a hiss or growl if you get too close.

If your cat seems to be more aggressive, be sure her environment is warm and secluded, as she might be acting out because she is trying to keep her kittens safe.

Maternal aggression is usually a very temporary state and can be increased by a noisy environment or by people constantly fussing over her and her kittens. This form of aggression will most often naturally go away once kittens reach about six to eight weeks old. At this point, kittens can take care of themselves.

Do Mother Cats Get Jealous Of Their Kittens?

Jealousy can sometimes happen, but usually, cats will only be jealous of kittens because of how much attention they might receive. You need to ensure everyone gets the same amount of love, and do your best not to change your cat’s routine once they’ve recovered from birth and taken care of her kittens.

Why Does My Female Cat Hiss At Her Kittens? 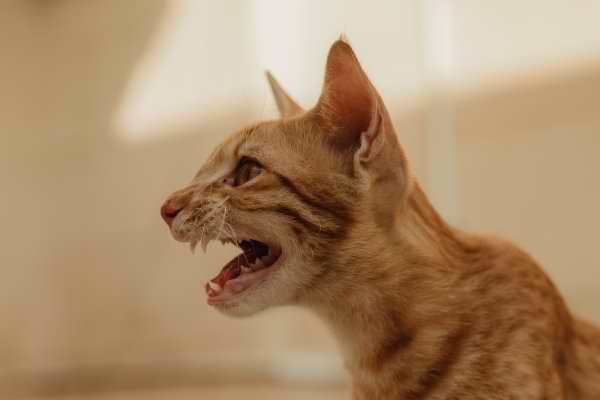 A female cat may hiss at her kittens to communicate with them, or teach them to communicate. For cats, hissing is usually a defense mechanism to try and scare people or animals away. Your cat may also hiss at you more often if she feels you’re interfering with the care of her kittens.

How Do You Know If A Cat Is Jealous Of A Kitten?

There are some common signs that cats will exhibit when they are jealous, and they are fairly easy to spot. Your cat may hiss or growl, swat at her kittens, eliminating outside of the litter box to establish territory, or try to come between you and the kittens.

She might also show signs of aggression such as enlarged pupils, an arched back, and a puffed tail. As long as you ensure everyone is getting enough attention, this should be a temporary nuisance.

Cats can be territorial regarding their favorite human and their space, and kittens will be getting in the way of both of those things. However, jealousy isn’t often a big issue unless you have changed your routine too much or aren’t paying attention to your cat because of the kittens.

It’s very unlikely that a cat would ever intentionally harm a kitten. They may try to play with the kitten or may swat at a kitten that gets too close. Slow and supervised introductions must be done between older cats and kittens to have it go as seamlessly as possible.

If your older cat has never been around kittens, they might not know how to react at first. Either way, socialization is a very crucial step that needs to take place before your older cats and kittens are all allowed to have full reign of the home.

How Do I Get My Cat To Stop Being Jealous Of Kittens?

Cats, just like humans, can get jealous because they fear they aren’t going to get the love and attention they need due to the presence of someone else. As a result, you must prioritize spending time with the cat, playing with them, and giving them physical and verbal affection.

This doesn’t mean you ignore the kittens; they need their own time with you as well. Quality time should include sitting with them and giving them pets, having a snuggle, chatting with them, and playing with their favorite toys. It can take some planning on your end, but it’s worth it to keep the household peaceful for all felines involved.