Cat Peed In My Dog’s Bowl (Is This Normal?)

If your cat peed in your dog’s bowl then, naturally, you will be annoyed. But, more importantly, you need to understand why, and what can be done about it…

Why has my cat peed in the dog bowl?

Your cat has likely peed in the dog’s bowl for one of three common reasons: It wants to show dominance, unhappy with the state of the cat litter, or it has a health issue. Each one requires a different approach to fix it.

Has your dog been following the cat around, even to the litter box? If so, then your cat peeing in the dog’s bowl may well be a way of saying ‘I’m the dominant one here, give me space’.

You can try putting the litter box somewhere a little more isolated, such as a room with a baby barrier to keep the dog out and give the cat a little privacy.

Keep in mind that urinating somewhere unconventional like this may also indicate that the litter box isn’t cleaned often enough, and if you feel that this is the case a second litter box or at least having one prepared for a quick switch might also be a good idea.

Finally, is this the only place the cat has peed in the house recently? It may be that your cat is suffering from a urinary tract infection or another health issue. Consider a vet checkup to rule this out if you think that this might be the case.

Contents show
1 Why has my cat peed in the dog bowl?
1.1 01. Dominance
1.2 02. Unclean litter box
1.3 03. Health Issue
2 Is it normal for a cat to pee in a dog bowl?
3 Does my cat understand that this is the dog’s bowl?
4 How can I prevent my cat from peeing in the dog’s bowl?
5 Do dogs and cats ever get along as friends?
6 Why does my cat poop in the dog food bowl?
7 Can dogs and cats share water?
8 How can I clean my dog’s bowl after it’s been peed on?
9 Why does my cat pee on my dog’s wee wee pads?
10 Could my cat have peed on my dog because it’s unhappy with its food?

Is it normal for a cat to pee in a dog bowl? 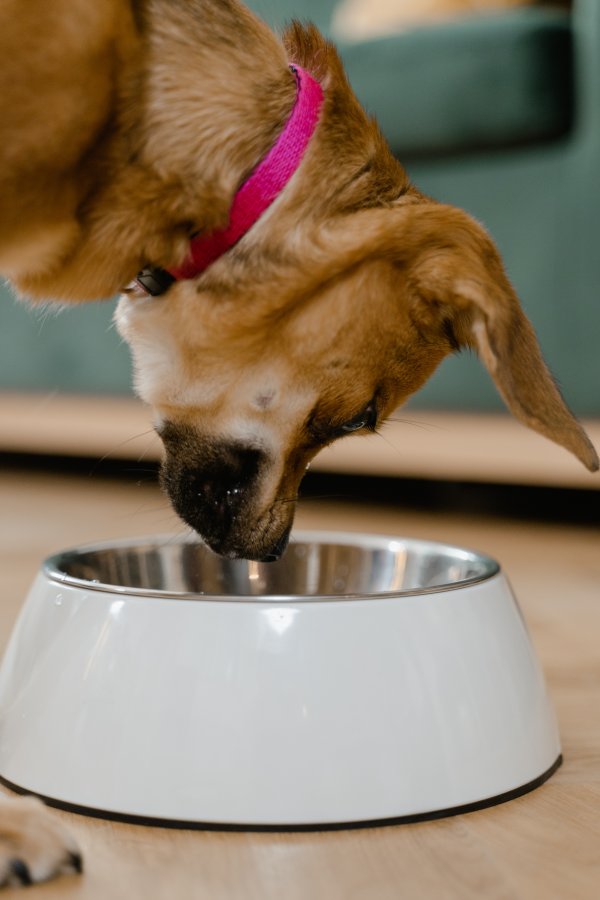 A brown dog eating from a pet food bowl.

No, it’s not very common, but it can happen. Cats are very territorial, especially if they have not been spayed or neutered.

If the dog is new, then your cat is quite likely asserting dominance (you may also want to see if they are stealing the cat’s food – your cat might be marking the dog’s food, after eating some, as a way to say ‘if you take my food, I’ll claim all of the food’.

Does my cat understand that this is the dog’s bowl?

Yes, your dog’s scent will be all over that bowl, so your cat definitely knows that it is the dog’s food. Likely what is occurring is a ‘territorial war’ and the cat is claiming superiority by picking the most noticeable ‘target’.

You might be able to stop this by using a baby gate to make some ‘safe spots’ for your cat, where the dog cannot go. This will help them to each have their own ‘areas’ and your cat may feel less threatened.

How can I prevent my cat from peeing in the dog’s bowl?

You can try moving the bowl to an area nearer to where you can see it, so that the cat may be less tempted to make such a bold move. There are also citrus cat repellent options, which smell nice to people, but not great if you’re a cat.

Spraying a little citrus repellent nearby may well keep the cat at bay and it’s generally non-toxic (check the labeling, as not all spray repellents are the same), so you may be able to spray it on the base of the bowl for increased efficacy.

Do dogs and cats ever get along as friends?

Yes, dogs and cats can become best friends and most will, it just takes a little time. Dogs don’t have much of a concept of personal space, the way cats do, and this can lead to some very awkward first encounters.

If you are introducing a new dog in the house, be sure to make a ‘safe spot’ for your cat that the dog cannot get into. As long as the cat doesn’t feel like they are being forced to interact with the dog 24-7, they will eventually feel safe enough to attempt initial play and other interactions.

Why does my cat poop in the dog food bowl?

This sort of reaction generally indicates one of two messages. First, pooping in the food bowl after eating first is a way for your cat to say ‘this is mine’, by essentially taking their fill and ‘ruining the rest for everyone else’.

If the food bowls are close to each other, a simple fix might be simply to distance the bowls, as it’s also possible that your dog has been sneakily munching cat food on occasion, prompting a ‘nuclear response’ from the kitty.

This can also be a reaction to the litter box being unclean, as well. Your cat knows that pooping here will definitely get your attention, so if you are only cleaning the box once a week then you might want to consider changing that to twice or thrice a week.

An easy way to do this is to prepare a fresh litter box and stow it under the sink or another convenient spot, so that you can simply switch out the boxes quickly, or you could try adding a second litter box in the house so that your cat has an option when they feel their current box is too dirty. 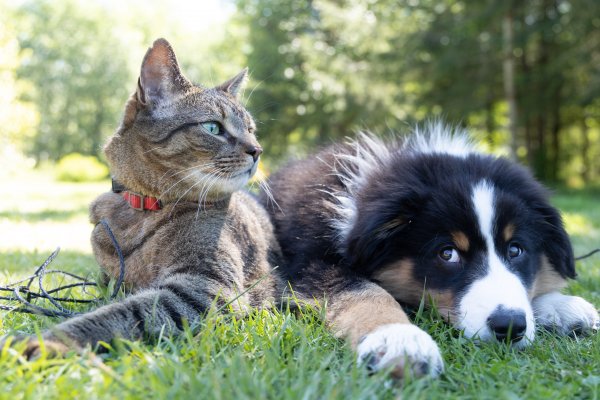 A cat and a dog lying outdoors next to each other.

Yes, they can share water, unless it becomes a competition. While some argue that there is an increased chance of sharing bacteria or disease, this is a risk anyway due to daily interactions such as playing together.

The only problem is when resource guarding becomes an issue. A gravity-style water bowl can help with this, as the bowl is always full, because otherwise if one animal drinks all of the water then they might start competing for this resource.

If you see this occurring, simply putting out a second water bowl should quickly diffuse the issue. Put it up high so that only the cat can get to it, and then they will each have their own bowl and no reason to fight.

How can I clean my dog’s bowl after it’s been peed on?

Enzymatic cleaner is generally going to be the best, but barring this you might try soaking the bowl in a mixture of hot white or apple cider vinegar and water, at a 1 part vinegar to 2 parts water ratio.

This should help to get the smell out of the dog’s bowl quite nicely and a good rinse with soap and water afterwards should complete the process.

Why does my cat pee on my dog’s wee wee pads?

One of the big problems with ‘pee pads’ is that they encourage urination inside the house. Your cat can smell the urine from the dog, as well, and assume that the dog is marking out this territory. In response, your cat is marking it right back!

It is a good idea to dispense with the pee pads altogether, instead taking your dog out on a regular schedule, but if this is not possible then you will need to thoroughly clean the area with enzymatic cleaner before replacing the pads each time in hopes that the cat won’t do it again.

If your cat has not been spayed or neutered, this should also be considered. Spaying or neutering your cat can tone down or even eliminate aggressive marking behaviors and also puts your cat at less risk for certain cancers as well.

Could my cat have peed on my dog because it’s unhappy with its food?

Usually behavior such as pooping outside of the litter box indicates dissatisfaction with the box or a possible health issue – try some softer litter and if this doesn’t help, a quick vet checkup can rule out any health issues.