Why Is My Cat Aggressive After Being Neutered?

If you have noticed that your cat is acting aggressively after being neutered, this may be worrying you and making you wonder why it’s acting like this…

Why is my cat aggressive after being neutered?

Your cat may act aggressively after being neutered for several reasons. However, the common ones are feeling fearful after their experience with the vet, still waiting for the effects of the surgery to kick in, or in pain following its surgery.

So, now you know. But, what should you do if this happens? Do cats hate their owners for this surgery? Will neutering eliminate spraying? Keep reading for these answers, and much more…

3 reasons why your cat is aggressive after being neutered: 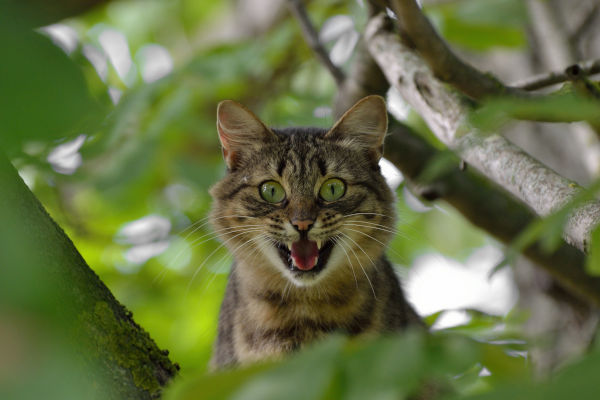 An aggressive/crazy-looking cat in a tree looking down.

Earlier I briefly mentioned a few reasons that your cat may be acting aggressively like this. So, in this section I will explain each one in more detail:

01. Too early to see the effects

After a cat is neutered it is not expected to show the desired results immediately. It can take as long as a month to see the effects. So, if your cat is acting in this way it could well be that you need to give it some time for its hormones to settle down.

Some cat owners have reported a change noticed after a couple of weeks. But, this varies a lot depending on each cat. But, up to a month is usually reasonable. If in doubt check in with your vet to see if it’s worth bringing your cat back in.

02. Fear from the experience at the vets

Depending on where your cat gets the surgery done the service it receives can vary a lot. And, this plays a big factor in the potential mood of your cat following surgery. For example, if your cat has had a bad experience, it may well act aggressive, and defensive.

Hopefully, your cat will be taken to a good, and caring vet that will be patient with them and make its experience as comfortable as possible.

If your cat is feeling pain after its castration it can affect its mood and behavior. It may lash out, hideaway, or even become aggressive. If you have some concerns about this it’s worth checking with your vet to see if any issues have developed since surgery.

There has been one story from a cat owner that had similar issues and went for a second opinion, with another vet and the cat was given anti-inflammatory treatment to help it with its pain.

What should you do if your cat is aggressive after being neutered?

If your cat is acting aggressively after surgery you may be wondering what you should do. This largely depends on the situation and the reason for it. If in doubt contact your vet, but here are some pointers to help you:

Fear from its vet experience?

If the cat is fearful from its vet experience, this is understandable. And, in most cases, with time, your cat will get over it. If it has been a while and it’s still acting this way then you can look into some other ways to deal with it. But, just make sure it is this first, it could be something else.

Too early to see the effects?

Sometimes you may see this aggression right after surgery, as discussed earlier. If this is the case you may just need to be patient and give your cat some time. As mentioned earlier, it could be up to one month before you see these results.

If your cat is feeling pain after surgery then this may be a concern. And, if this is the case it could just be some soreness or a real issue. If in doubt contact your vet, or seek a second opinion.

Do cats hate you for neutering them?

In most cases,  cats do not hate their owner for being neutered. This may be because they either blame the vet that has done it, or they forget about the experience shortly after it happens. However, there are some cases where an owner can get the blame.

There is a story of one cat owner that got a cat from a rescue home, and before building a bond with it took it to the vets for neutering. Following this, it became aggressive towards him. And, whilst it’s not conclusive, it is strongly believed to be a result of the surgery and receiving the blame for taking it there.

Does neutering usually calm down a cat? 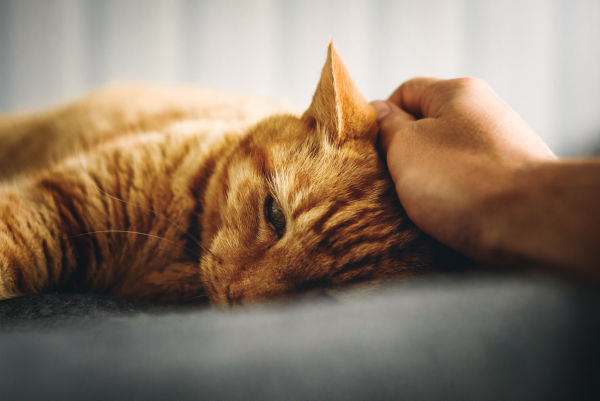 A ginger cat rolled over getting its head stroked.

Neutering is unlikely to change a cat’s mood or personality. So, if it’s an aggressive or hyper cat this surgery is not likely to be the answer. Many people believe it is, but they stand a good chance of being let down if that is their expectation.

If you need to calm an aggressive cat (click here to see my best solution) it’s best to look at other solutions such as cat pheromones. They can help to improve your cat’s mood in this way.

Can a neutered cat still mate?

A castrated male cat can still have the desire to mate. This is more likely for an older cat that has years of experience and may even do this from sheer habit. But, most castrated male cats will not have this desire.

This is because the castration process will stop the production of the hormones that give the male cat the urge to chase and mate with females.

Will neutering eliminate your cat spraying?

Neutering is known to be highly effective in stopping cat spraying. In fact, they say up to 85% of male neutered cats will stop. But, it is not 100% So, some will persist.

The reason why intact male cats are motivated to spray in this way is to maintain their territory. And, this is driven by their desire to gain dominance and attract a female mate. once they are castrated this urge to chase females and claim territory stops, in most cases.

Intact male cats are highly likely to fight, especially when compared to neutered cats. This is because they will want to claim the females in the area. And, in their world, this is done by being dominant and claiming territory.

When their territory is compromised by a rival cat they are likely to fight with the cat to show it who is the boss.

Should you build a bond with your cat before neutering it?

You should build a bond with your cat before neutering it. This is because it will reduce the chances of it blaming you following its surgery. A cat is more likely to forgive, or never accuse you if it has a bond with you first.

As discussed earlier, in the story about the cat owner that took their cat for castration straight from the rescue shelter, this situation could have been salvaged if he took the time to bond with the cat first.

Why is my cat angry after surgery?

Some cats may have some temporary effects of defensiveness, aggression, or seemingly in a bad mood. This may be due to the anesthetics that are administered before the surgery. And, if it is this it can even affect their appetite.