Why Is My Cat Camera Shy? (Awkward Anxiety?)

If your cat is always hiding from you when you try to take a picture of it, you may be wondering why and what you can do about this…

Why Is My Cat Camera Shy?

Your cat may be camera shy because of the flash. A flash can be quite blinding, and even if you’ve turned it off for this photo your cat knows that your camera or phone being pointed at them is often followed with a blinding flash of light.

So, now you know. But, do cats even know what a camera is? Do some cats like cameras? How can I take a photo of a shy cat? Keep reading for these answers, and much more…

Contents show
1 Why Is My Cat Camera Shy?
2 Do cats know what cameras are?
3 Do cats like cameras?
4 How can I take photos of a camera shy cat?
5 Why do my cats’ eyes look bright in photos?
6 Why does my cat avoid looking into the camera?
7 Does it help if my cat is exposed to cameras from a young age?
8 Will a camera with a fast shutter speed help to take cat pictures?
9 Should you turn the flash off when taking pictures of your cat?
10 How do I make my cat look at the front camera for a selfie?
11 Can cats hear slight movement from the camera?

Do cats know what cameras are? 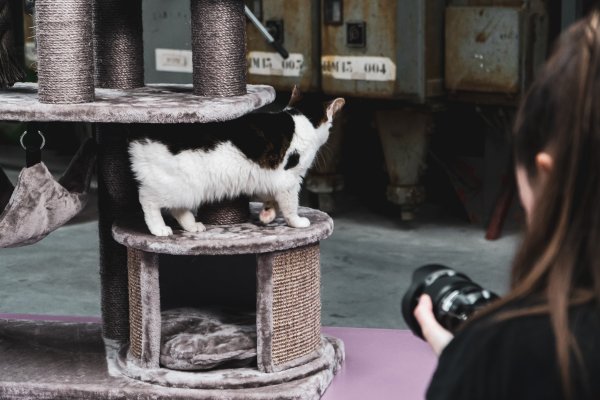 A lady taking a photo of a cat.

Your cat may not know what the camera is, but they likely know about the flash. Cats are very sensitive to light, as their eyes are designed to only require 1/6 of the light that humans do in order to see clearly in the dark.

This makes them naturally wary but if you raise the general light in the house and stop using the flash then your cat may eventually lose their distaste of being photographed.

It’s a toss-up. The first time that a cat sees a flash they might react in different ways, depending on the cat’s personality. Some cats will jump or dart away in response to a flash, while others might shake their head a little and look confused, and still others might pull their head back slightly, cock it to the side, and stare at you suspiciously.

It all depends on your cat and their own unique personality, though it would probably be a more accurate statement to say that ‘some cats tolerate a camera’ rather than ‘some cats like the camera’.

How can I take photos of a camera shy cat?

Taking photos of a camera-shy kitty can be tricky and is most often a game of patience and distraction. If you provide them with a favorite toy or a pinch of catnip, they will often be a little more amenable to the occasional candid photo, but you can also get a little sneaky.

Increase the amount of overall light in the house, so that your cat doesn’t develop a lasting association with the flash from the camera and you pointing it at them. You can also fix some PC-friendly cameras around the house, and this lets you take pictures from your PC without the telltale camera or the motion of you creeping up on them.

You can simply zoom-in from your PC, take a picture, and your cat will be none the wiser. You’ll get better pics, however, if you stop using the camera flash. Don’t make your cat stay still, as they’ll remember this and dislike photos.

Between this and stopping the flash, eventually your cat won’t associate anything bad with the camera and you should be able to take photos to your heart’s content.

Why do my cats’ eyes look bright in photos?

Behind your cat’s retinas, there is something called the tapetum lucidum, and this part of the cat’s body evolved to help them to see in the dark. The tapetum catches light and reflects it back to the rods in your cat’s eyes, giving them superior night vision in low-light situations.

Simply put… When you take a photo and get that ‘eyeshine’ effect then you are simply seeing the tapetum reflecting the immediate or surrounding light.

Why does my cat avoid looking into the camera?

Cats don’t know what a camera is, so from their perspective you look a little weird. You are standing there, pointing something at them, and they don’t know (or sometimes don’t care) what you are trying to do and so after a momentary, puzzled pause your cat just gets back to what they were doing before.

This results in your cat looking away, but they aren’t likely doing it on purpose, there’s just something more interesting to them in the direction that they are looking. That said, if you take a lot of pictures of your cat and tend to pick them up and try to pose them, then they might well be turning away on purpose out of annoyance.

If you think that this might be the case, stop posing them and try to take your pictures as quickly and candidly as possible and you should get better results once your cat knows that you aren’t going to force them to stand a certain way or in a specific place.

Does it help if my cat is exposed to cameras from a young age? 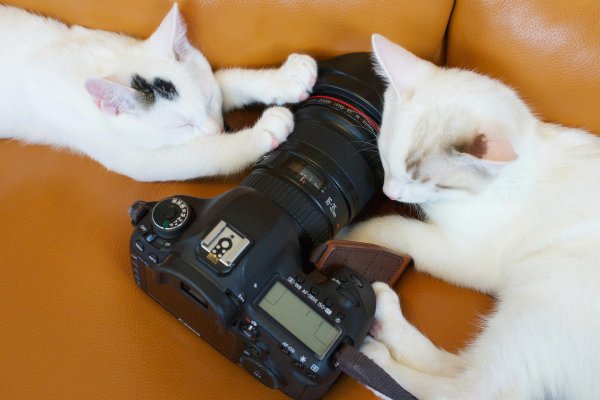 Two cats lying next to a camera.

Cats exposed to a camera early might go either way, so to speak. If the flash frightens them, then they’ll have bad associations with your phone or your camera. If it doesn’t bother them so much, they’ll just accept that you like to point this ‘weird thing’ at them and since they usually get a treat afterwards, they’ll consider it acceptable and normal behavior.

Your best bet is simply to distract them. Give them a treat to munch or consider holding up and wiggling a string while you focus for a picture. It gets their attention for a few moments and gives you a chance to get some really great pictures without annoying your cat.

Will a camera with a fast shutter speed help to take cat pictures?

A fast shutter speed, such as a 1/500, can certainly get you some great shots that you might not get any other way. The caveat of this is that you either need to use the flash or to raise the level of lighting in the area.

Use the zoom so that you can keep your distance and minimize the impact of the flash and with a little luck your cat won’t mind this at all.

If they hate the flash, then definitely turn up the lighting in the house, as those fast shutter speeds mean that your camera is getting less light and this will affect your pictures if you don’t raise the light levels.

Should you turn the flash off when taking pictures of your cat?

Turning off the flash is definitely a good idea. Due to the presence of the tapetum behind their retinas, when your flash deploys then your cat is getting a huge amount of light in their eyes. Think of it like someone taking a picture with the flash in your face, and then consider that cats only need 1/6 of the light that we do to see in the dark.

Some cats will tolerate the flash, but it’s still quite blinding and it’s best to avoid it if you can. Photoshop and some of your photo editing phone apps will let you lighten and adjust pictures on the fly.

While this takes a little extra time, your cat will be much more tolerant of having their picture taken if they know that it doesn’t come with a flash of blinding light.

How do I make my cat look at the front camera for a selfie?

It’s all about distraction and you need to be creative, as the same thing won’t always work once your cat is used to it. Try making weird sounds with your mouth or with a novelty keychain ‘sound machine’, and this can get their attention.  Bird call whistles like you can get at the carnival are another favorite.

You can try snapping, calling their name, or even simply hold a length of cut yarn in your hands while you are taking their photo. If you give them a sound to locate or a physical object that interests them, they will look at it, and you’ll get that selfie-shot with your cat looking right into the camera!

Can cats hear slight movement from the camera?

Most likely your cat is hearing you creeping up on them and holding up that camera, and they don’t know what you are doing but they know that it is abnormal. As far as sounds from the actual camera, some motion-sensing cameras produce a sound that we can’t hear *but your kitty can) when they take photos.

There is also the possibility that the shutter of the camera taking a picture is reflecting a little light and your cat is seeing this. More often than not, however, your cat just knows that something is up by the way that you are creeping up on them and pointing things at them.