Does My Cat Think I’m Dead When I Sleep?

While you are sleeping at night you may be curious to wonder what your cat thinks about, and if they even understand that you are dead or alive…

Does My Cat Think I’m Dead When I Sleep?

No, your cat doesn’t think that you are dead, and if they sound panicked when they are waking you up for a feeding then don’t believe a word of it – your cat knows how to get your attention.

Keep in mind that cats, who sleep around 10 to 16 hours a day on their own, are quite familiar with what sleep is by experience. Beyond this, the sounds of your breathing will be audible, just more relaxed, and your scents will still inform your kitty that you are very much alive!

Contents show
1 Does My Cat Think I’m Dead When I Sleep?
2 Why does my cat rub against me when I sleep?
3 Is it safe to sleep in the same bed as your cat?
4 Do cats attack their owners in their sleep?
5 Do cats check on you at night to see if you are breathing?
6 Why does my cat stare at me when I am sleeping?
7 If I die will my cat know?
8 How do cats feel when you’re asleep?
9 Can cats predict death?
10 Do cats mourn you when you are dead?

Why does my cat rub against me when I sleep? 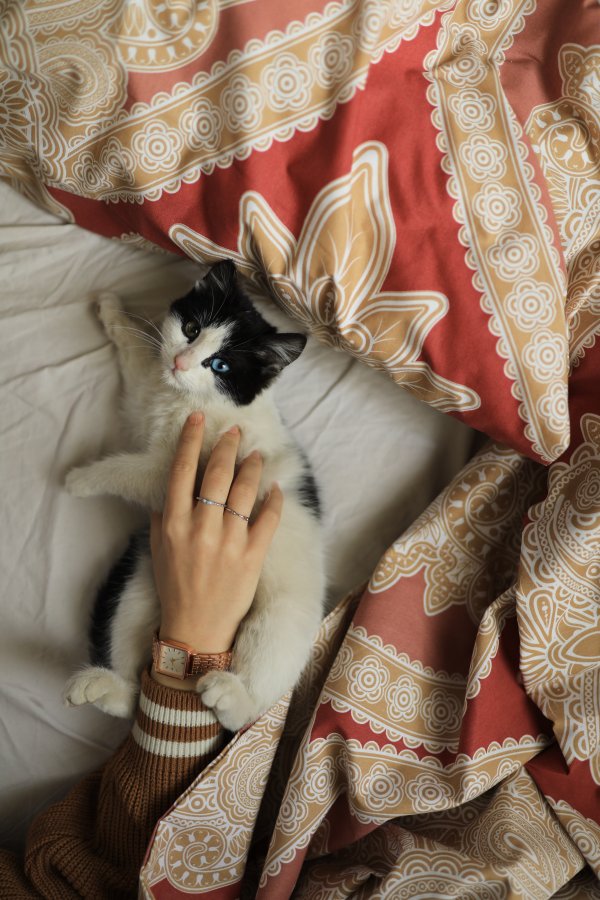 A black and white cat lying in bed and being held by a person.

When your cat is rubbing against you when you are trying to sleep, it’s usually just their way of saying that they would like your attention and it also serves the purpose of marking you with their scents. Some kitties will even do this so that you’ll offer to share the covers, so that’s another thing to consider.

Most likely, however, your cat just wants a little more love from you at bedtime.

Is it safe to sleep in the same bed as your cat?

Provided that you don’t roll around in your sleep, then it’s just fine to let your cat sleep with you, I just don’t recommend it with kittens. Kittens are too small and fragile, for one thing, and they are also more prone to parasites and disease at this age.

With older cats – provided that they are getting dewormed every 3 months – it should be just fine to let them hop into bed to sleep with you when they like. It’s nice for both of you and it will also help to build a closer bond of love and trust.

Do cats attack their owners in their sleep?

Cats sometimes dream when they sleep, or at least that’s what science seems to indicate, but mostly this will involve a little twitching as if they were running and the occasional ‘funny face’ from time to time on your cat’s part. That said, YOU might get attacked in your sleep, but it depends on your cat.

It’s not uncommon for exposed toes to get pounced on, though they are at even more risk when covered by a thin sheet. Your cat sees the movement underneath and their predator instincts kick in as they try to catch ‘whatever that thing is’ that is moving around under the sheets.

Usually, it will just startle you, but most cat owners get used to it and simply ignore this behavior or bundle up so that their cat is less tempted to hunt their toes.

Do cats check on you at night to see if you are breathing?

Cats notice things that are out of the ordinary. It’s a useful skill for a predator when you think about it. Anything that looks, smells, or sounds out of place is going to be noticed, and often your cat will bring this to your attention.

Many cat owners who have sleep apnea have reported being woken by their cats when their breathing became troubled, just as an example. While I can’t say for sure that the cat knew there was a danger for their owner, I can certainly say that those cats noticed the changes in breathing and brought it to their attention!

Why does my cat stare at me when I am sleeping? 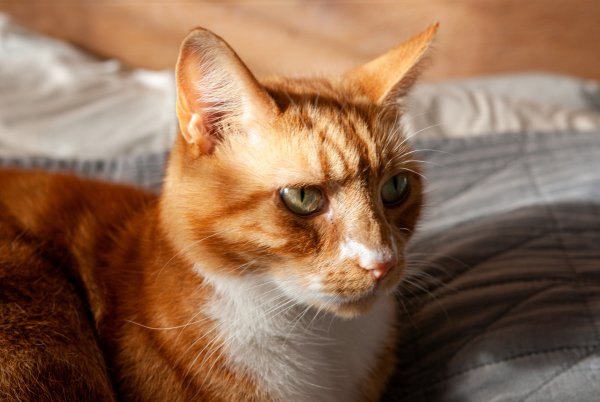 An orange cat staring while lying on a bed.

While it’s fun to think that your cat is plotting something nefarious, more likely than not you’ve just made a few noises in your sleep that amused or simply interested them and they’ve zeroed in their gaze to pinpoint where the sound was coming from.

Cats can certainly do this and as they also have excellent night vision, it’s not surprising that they might find it interesting from time to time to watch us sleep. While they could just be checking, in anticipation of doing some mischief while you rest, there’s simply not enough data from research yet to prove this!

If I die will my cat know?

While I can’t say if your cat will think that you’ve left or understand that you died, what I can say for certain is that they would notice your absence and feel this deeply. Cats are capable of mourning, just like humans, and when another animal in the house dies or one of their owners, then their behavior often changes.

They may become disagreeable, for instance, taking potty breaks in the house or hissing at people when they get too close. Some cats will go into hiding when they are sad, as well, while others will just ‘mope about’ by moving slowly and simply not being as lively as they were before.

In time, they will get better, but I can say with certainty that your cat would notice and react if you were gone.

How do cats feel when you’re asleep?

Well, as cats they aren’t likely to understand the concept of sleep, but as schedule-minded as they are, cats will know that at certain times you become much less active and fairly still regularly. What they do with this information, however, is completely up to the cat!

Some cats will take it as a cue to nap with you, while others might wake you up for attention or because their food bowl is empty. It will vary with these furry little characters, so unfortunately there is no ‘one size fits all’ answer when it comes to your cat’s opinion about your sleeping.

While we’ve all heard stories about cats in nursing homes comforting elderly patients who were close to their end, it’s likely less of a ‘death prediction’ scenario than one of the heightened senses. Cats are very reliant on scents and on reading body language.

While I haven’t done a lot of studies on whether or not they can have small specific diseases, I do know that their sense of smell is acute enough that they likely know when we are sick simply from the scent of our sweat.

Cats are also creatures of habit, so little things that humans might not notice are going to be standing out like a neon sign for most felines. So, can they predict death? Probably not, but they can certainly tell when things are not right.

Do cats mourn you when you are dead?

Yes, cats can and do mourn, and it causes behavioral changes that you will notice if an animal or a human die in a household and the cat was close to them. Typically, cats will eat less and not seem to want to play, or they might start sleeping much more than usual as if trying to sleep their days away.

Some cats will hide or even become antisocial. While it’s a little different for each cat when it comes to symptoms, the bottom line is still the same – cats know when we’re gone and they mourn when this happens.