Cats are not likely to eat an Axolotl. But, there have been reports of them attacking or knocking them out of their tanks in domestic homes. Sometimes cats are attracted to the water in their tank or their movement and as a consequence may injure or kill the Axolotl.

So, now you know. But, how can you protect your Axolotl from your cat? Do they get scared of cats? Could it attack a cat? Keep reading for these answers, and much more… 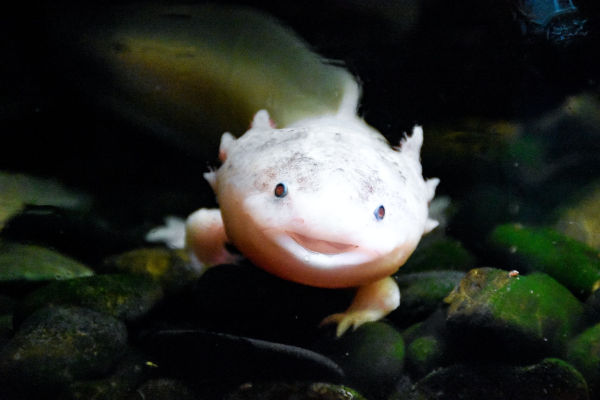 An Axolotl in a tank.

An axolotl is classed as an amphibian, and not a fish, according to Wikipedia. They are a salamander and related to the tiger salamander. They have several aliases such as “Mexican Walking Fish”, or just “Walking Fish”.

These pets are popular due to their interesting looks and cute-looking little faces. This makes their owners extra cautious when they have other pets, such as cats.

How can you protect your Axolotls from your cat?

If you have a cat as well as an Axolotl you may be interested to know how to keep it protected. Here are some suggestions:

To stop your cat from getting into the tank you need to make sure you have a lid. Ideally, you buy one with a lid. But, if you already have one you will need to try and get a lid or make one yourself.

One method to protect your Axolotl tank is to use egg crates as home-made lid covers. If you are lucky your cat won’t even bother it, but these things are not worth leaving to chance.

The best method is to buy a tank with a secure lid attached. This way it is designed to fit snuggly and keep your cat safely out of it. Ideally, you need a 40-gallon tank (or minimum a long 20 gallon one).

04. Locate the tank high up

Another simple method to protect your tank is to locate the tank high up. The idea is to keep it out of your cat’s reach. Obviously, this depends on the layout of your home and how curious your cat is.

But, either way, it’s better than leaving it at eye level and leaving it to chance, are you with me?

Axolotl’s do fear cats. In fact, they will fear anything larger than them showing interest in their tank. This is just natural behavior and a defensive mechanism to help them survive.

As a matter of self-defense, they have even been known to lash out or bite any predators that try to dip into their tank (more on this later). 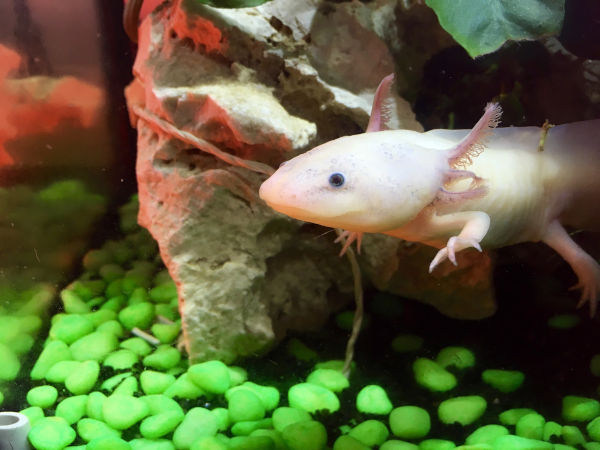 A white Axolotl in a tank.

Axolotl’s do not enjoy being touched. They are more of a pet for observation rather than touching. If you really want to touch them it’s important to have cleanly washed hands to avoid passing on any germs.

Also, rather than trying to grab them, which could scare them, offer your hand and allow them to come to you. But, be careful, big ones can get scared and could try to bite.

Realistically, like most water pets, like fish, they are not used to being touched by land animals. And, from the wild, this is seen as an attack rather than an act of kindness. And, if I was them, I would feel the same.

Why? Well, let’s be honest, if your cat dabs its paw in the tank, it’s not to make friends, right?

Will my cats scare an Axolotl?

Cats will scare Axolotls if they try and dip their paw into the water, which some of them do try to do. This may be because they want to drink the water but still may scare it.

However, if they are just walking past their tank it is unlikely to scare them it will just be part of their background.

Would a cat attack an Axolotl?

Giving a chance a cat will attack an Axolotl. This is part of their curious and predatorial nature. However, they are unlikely to eat it. There have been reports of them knocking them out of their water and even biting their tails.

Unfortunately, these injuries can be enough to kill it but there are some cases where they can be returned to their tank and, with time, survive.

Is it bad to get an axolotl if I have a cat?

It is not bad to get an Axolotl with a pet cat. The important thing is to make sure that you keep a lid on it, or some form of covering at all times to protect it.

Many cat owners have cats and Axolotls together so it has been proven to work. It’s just up to the cat owners to take precautions. As discussed earlier, getting a suitable lid is enough to keep them under control.

Can an Axolotl bite a cat?

An Axolotl can bite a cat. Particularly, if you have a large one and your pet cat attempts to dab its paws into the water the cat may nip its paw as a way of self-defense.

The best method is to keep it covered so that your cat does not get the opportunity to dip into the water in the first place.

If your cat did get bitten by the Axolotl, it is unlikely to be a big bite and your cat will learn not to put its paw back in there again any tie soon.

Can an Axolotl survive a cat attack?

Depending on the attack an Axolotl can survive a cat attack. But, it really depends on the injuries it sustains. There have been reports of cats nipping their tail and being successfully returned to their tank.

However, it is unclear how long the Axolotl survived after this in these reports. So, you can’t rely on this as reassurance that yours will be ok.

Axolotls are not known to be toxic to us humans. Also, there is no known studies for cats. But, as they live in siloed-off tanks plenty of people have had them living together with cats without issues.

Can an Axolotl ingest cat fur?

Cats can ingest Axolotl fur. This is quite rare but there has been a report of a cat owner, who allowed his cats to look into the tank, having cat fur accidentally dropped into the tank.

This is quite serious because in this case the Axolotl ate the fur and got blocked inside. This caused it to have issues with passing (eliminating) later on.

One of the reports went on to explain that the cat fur was seen stuck in the Axolotl’s rear end. And, it is not a good idea to pull any blockage out from a pet because it could cause damage to their insides.

Not all cats like fish tanks. Some are obsessed with them while others do not respond to them at all. Therefore, it is down to the personality of your cat.

Either way, it’s important to keep some distance from those cats that do want to look into it, or even worse put their paws in it, as discussed earier.