Will Neutered Male Cat Hurt Kittens? (Is This Absurd?)

If your male cat is neutered, or you are considering it, you may be wondering if this will reduce the chances of it attacking your kitten…

So, now you know. But, does neutering them affect their behavior? What is the best way to introduce your male cat & kitten? How can you prevent them from fighting? Keep reading for these answers, and so much more…

What Is A Neutered Male Cat?

A neutered male cat is a castrated cat whose testes are removed in a systematic surgery. Cats, both male and female, are neutered to stop their further breeding. Once the cats reach their breeding age, the owners opt for castration if they don’t want more kittens in their home.

Neutering the cats is often suggested by vets and other experts. It reduces the stray kitten population without performing an abortion process on pregnant cats. Neutering the male cats controls their sexual aggression and mounting behavior.

It can also reduce the risk of feline diseases that cats develop after reaching sexual maturity. Usually, a male kitten is neutered at 4 months, thus strictly controlling his sexual aggression from an early age.

Does Neutering A Male Cat Affect Its Behavior? 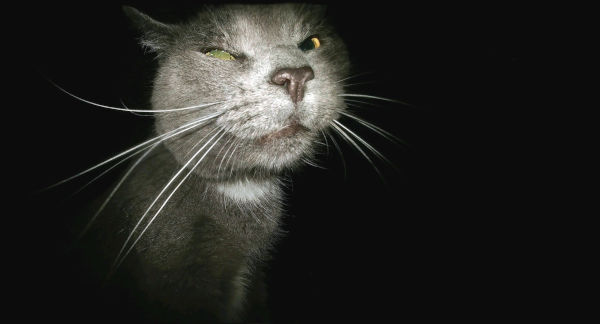 Neutering a male cat can change its behavior, usually making it way better than that of an unneutered male cat. The neutering process affects almost all those cat behaviors that are under hormonal influence. Thus, the neutered male cats (are they usually hyper? click here) are hardly attracted to female cats and rarely attack them or try mounting them.

However, a female cat’s scent can sometimes attract freshly neutered and some rare male cats. These rare cats might attack the female cats if not controlled and monitored.

Overall, neutered male cats are less aggressive and usually don’t fight with the other male cats in their vicinity. You must understand that a cat’s anger and overall behaviors mostly result from genetics, and castration rarely affects them in any way.

Can You Leave Your Kitten Alone With A Neutered Male Cat?

You can leave your kitten alone with a neutered male cat. But, it depends on your male cat’s behavior and his relationship with the kitten. You shouldn’t bother much about it attacking a kitten sexually. There is rarely any possibility for the neutered cat to attack kittens for mounting.

Over time, these two parties might become friendlier towards each other. In such a case, you can leave these two together unsupervised. It’d be better if you do so only for a short amount of time.

What Is The Best Way To Introduce Your Kitten To A Neutered Male Cat?

Hurrying with the introduction process can only make things worse. Your neutered cat, no matter how gentle, might feel like hitting the little kitten on their first meeting. It’s better to first let the two stay around a toy or a cushion that smells like the other one.

After a day or two, let these two face each other but ensure the distance between them and keep monitoring their behavior. After this, let your kitten and neutered male cat directly interact for a few minutes when you’re around. Over time, you’ll notice a change in their behavior, and they’ll surely get friendlier towards each other.

How Can You Prevent Your Kitten & Neutered Male Cat Fighting? 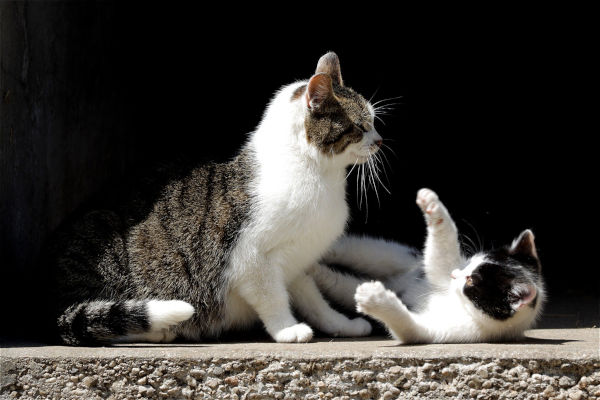 You can prevent the kitten and neutered male cats (do they still spray? click here) from fighting by minimizing their interaction. Other than that, you can slowly introduce the two while keeping a watch on them.

Start slow, then increase their time together

Steadily increasing the cats’ time together also reduces the chances of male cats fighting with or hurting the kitten.

It’s better to keep these two in their separate spaces with no sharing of food, water bowls, and toys allowed. Limit their direct interaction and don’t leave them unsupervised ever if the neutered male cat shows even a minor sign of aggression towards the kitten.

This is because the matured cats can stimulate the neutered males with their scent. This makes male cats aggressive, forgetting their fatherly instincts.

Would A Neutered Male Cat Attempt To Mount A Female Kitten?

It’s rare for a neutered male cat to attempt mounting a kitten, at least until the female kitten is sexually mature. Some neutered males cats might try mounting mature female cats after chasing their scent.

However, there is no need to worry about violence. The chances of male cats sexually hurting the kitten are almost absent.

Can neutered male cats get randomly aggressive at times?

Sometimes, your male cat can get aggressive, and hence it won’t like being around certain kittens. This leads it to attack them, sometimes very aggressively. Yet, the owners can reduce the chances of such a feline fight between a neutered male cat and kittens.

The best way to do this is by introducing these to one another in a controlled environment. If introduced the right way, a male cat can even get friendlier towards the kittens (what if its pawing it? click here). Such a male cat looks after the kittens and cuddles them, at least till they reach sexual maturity.

What Are The Advantages Of Neutering A Male Cat?

Neutering the male cats helps in controlling their population. Doing so also reduces the inter-cat aggression between the male cats staying in the same territory.

Neutered cats are less likely to roam and hardly develop prostate or testicular cancer. Neutering the male cats also reduces their desire to spray and mark their territories too much.

What Are The Disadvantages Of Neutering A Male Cat?

If not taken care of after neutering, the castrated male cats become obese due to their slow metabolic activity. This obesity in cats, in turn, leads them to several health issues.

Neutered male cats often develop UTIs, bone issues, and diabetes. The chances for developing these diseases are more common in older cats than those castrated right after reaching sexual maturity.

However, all these health issues can be easily controlled. You just have to reduce your neutered cat’s food intake and focus on its physical activity.

There is specialized food available for neutered cats, and you can resort to it if possible. Other than this, keeping the neutered cat indoors and arranging regular veterinary checkups can also help to keep the cat healthy.