Will a Maine Coon kill chickens?

Maine Coons can kill chickens. And, given the opportunity, they are likely to attack them. This is because they are quite large, like hunting, and see the chickens as their prey.

Use to protect your chickens:

So, now you know it can. But, what are the tell-tale signs that it will do this? How can you prevent this from happeing? Are Maine Coons generally viscous? Keep reading to get these answers, and more…

3 Obvious Signs a Maine Coon will kill your chickens: 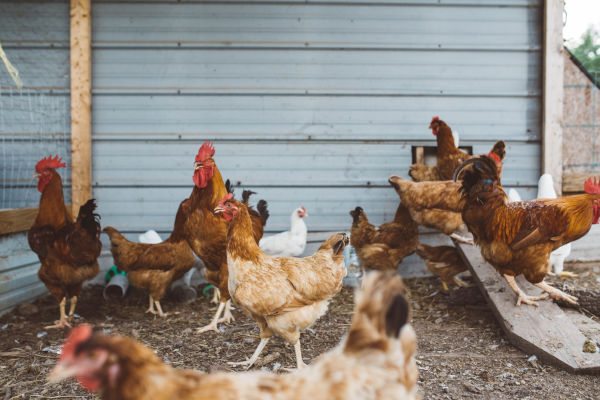 Chickens walking around, feeding and pecking.

As discussed Maine Coons can, and will kill (what about us humans? click here) chickens. But, there are 3 signs to look out for to clearly see when they are likely to attack your chickens:

The first obvious sign is the opportunity. Meaning, if you have chickens in your back garden, for example, aimlessly roaming around without any cover, then you can be sure the Maine Coon will strike.

This is because they are natural hunters and cannot avoid the temptation of attacking a chicken literally roaming around, in its territory without any cover.

If you are worried about this it’s best to keep your chickens covered to avoid this.

Maine Coon’s have healthy appetites, meaning, they like to eat. Hence the reason Maine Coon’s get so big. So, if they are not getting enough food this will make them ravenous. And, your chickens will be the next best thing to keep their hunger at bay.

To avoid this keep your Maine Coon fed well. However, not overfed. There is a fine line between fed well and obesity, are you with me? Enough to make it feel fulfilled and less likely to be scrounging for more.

As you may know, cats are curious creatures. And, Maine Coon’s are no different. If they see or hear the chickens then they will get curious and want to investigate.

This investigation is likely to result in the chickens getting attacked unless you keep them well away from your cat’s curious eyes.

How can you prevent a Maine Coon from killing your chickens?

So, now you know what signs to look out for. But, you may be wondering what proactive measures you can take to stop a Maine Coon from getting to your chickens. Here are a few suggestions:

One tactic that chicken owners is electric fencing. This will prevent cats or other animals like foxes from getting to them. The charge is enough to fend them off but shouldn’t be enough to hurt them.

If you have chickens but fear a Maine Coon attacking them then an enclosed chicken run/pen is ideal. As most homes do not have loads of space a pop-up one is even better.

It allows you the opportunity to protect the chickens and reserve space when it’s not being used. Also, it allows you to easily relocate it when you need to.

Generally speaking Maine Coons are not vicious. But, they will defend themselves if they are provoked. And, due to their size, they are often feared.

Like any other cat, several things could make an individual cat become aggressive such as stress, feeling physical pain, redirected aggression, etc.

Either way, this does not mean all Maine Coons are aggressive (Click here to see when they calm down). It means they need to be monitored on a case by case basis.

Maine Coons do line to hunt. But, so do most cats. Meaning it is not specific to just Maine Coons. It is cats in general. Domestic cats in particular will hunt just to satisfy their instincts.

It is common to see a cat attack its prey, such as a chicken, or mouse, and not eat it. It may just leave it there and move onto its next activity. But, what does this tell us?

It means it’s not hunting for hunger or starvation. It is doing it because that is how they are wired, are you with me?

Will all cats try to kill chickens?

Most cats will attack chickens if they have the chance. This is not specific to Maine Coons. However, due to their size, they are often the main species that chicken owners focus on or fear.

Cats are known to attack these chickens, eat the main torso, and leave the feathers, head, etc. It’s not a pretty sight but it is part of their nature.

Feral cats, regardless if they Maine Coon or not, will attack chickens. These cats in particular are more likely to because they have a real need to feed themselves each day.

A standard domestic cat is fed at home so is not likely to be as hungry or desperate as a feral cat. This is the same for a stray cat as well, there is a difference between them

Will a rooster kill a cat?

A rooster could kill a cat. But, it is more likely to be killed by the cat. This is because cats are born hunters and know how to focus on their prey’s weak spots, such as their neck. So, it is not likely to deal with the cat’s technique.

A rooster is also more likely to defend rather than attack. And, this will give the cat the chance to get the upper hand even before it notices the cat.

How can you be sure it is a Maine Coon attacking chickens?

If your chickens have been attacked by a cat and you assume it’s a Maine Coon, how can you be sure, what things distinguish a cat as a Maine Coon?

The first thing is the fur of the cat. Maine Coons have distinctive shaggy thick fur. Which will make them stand out quite a bit.

One of their most noticeable traits of a Maine Coon is its size. They are quite large when compared to the average cat.

If you look at their tail you will notice that it is a long tail. And, not just that it is also quite thick and bushy.

A more subtle trait is their eye size. Most of them have large eyes, even as kittens. This will make them stand out more than any other breed.

The mane on these cats usually sticks out right away. It is usually a bit longer than the fur around its body making it quite distinguishable.

Do Maine Coon’s eat a lot?

Maine Coon’s (Click here to see if they can survive in hot countries) do not eat a lot. Most people assume they do because of their size, but this is more of a rumor than a fact. They eat in proportion to their size, so it can seem that they do to some people.

One of the biggest mistakes some people make is continually feeding them because they feel that they need it. This can make any cat get greedy. They often do not know when to stop unless you control it.

How Much do Calico Cats Shed? (Prevention, Tips & Guide)

Why Is The Gyra Cat Deadly? (Could It Kill You?)