Will 2 Calico Cats Get Along? (Or Too Vicious?)

If you have a calico cat and want another one, or just curious, you may be wondering if two can get along well together…

Will two calico cats get along?

Two calico cats can get along. Like with most other cats, two calicos that have grown up with each other will likely get along. Introducing a new cat to the mix, however, maybe a bit of a challenge.

So, now you know. But, is it quite rare to have two calico cats? Can their fur color affect their personality? Are they known to be aggressive?

Is a Calico’s fur color the best determiner of personality?

A cat’s fur is not a good determiner of its personality or aggression towards other cats. The raising and individual personality will more likely determine if two cats will get along. The same goes for calico cats.

Is it unlikely to have two calico cats? 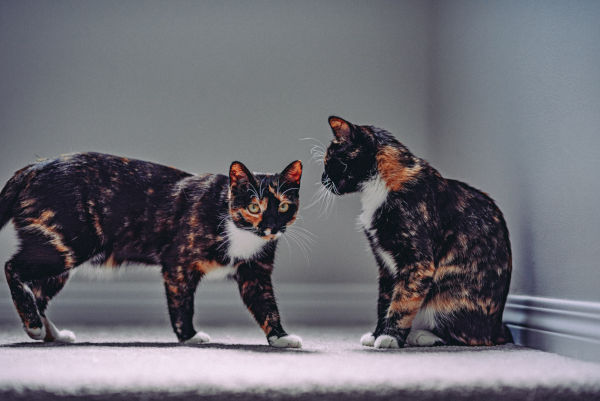 Calico cats as a whole are incredibly rare. That’s because of their unique genetic sequence. Since having one calico cat is rare, having two is rarer. Having two calico cats is not unheard of, though; many people have more than one.

Interestingly, some studies have found a link between certain coat colors and aggression. The study found that cats with calico fur tend to exhibit more aggressive behaviors than non-calico cats.

This includes behaviors like hissing, scratching or, biting. This study backs up calico cats’ reputation for being difficult.

It is important to mention that this study only based aggression on the owners’ reports. This means that the study does not conclusively find whether calico cats are more aggressive than other coat types.

What two cats make a calico?

To talk about what cats create a calico, we have to have a short genetics lesson. Calico fur requires two X chromosomes.

This means that a calico cat must have a parent with one gene and another parent with the other.

Does a cat’s color affect its personality?

Some studies suggest that there is a connection between feisty behavior and calico coats. It is important to note that the coat itself is not responsible for the cat’s behavior.

Instead, these studies suggest genetics that creates the calico fur may affect the cat’s personality too.

On top of genetics, several other factors affect a cat’s personality. Most notably, how it was raised in its youth can determine how it acts as an adult. For example, kittens that were never around humans may be more aggressive as they get older, regardless of their coat.

So, the cat’s color does not affect its personality all that much. Though genetic factors may predetermine certain characteristics, how they are raised and nurtured is more important in their personalities.

Why are two male Calico cats together so rare?

Interestingly, some males have a genetic mutation where they receive two X chromosomes and a Y chromosome. This allows them to have a calico coloration, but they will often be sterile as well.

Male calico cats are incredibly rare. There is less than a 0.1 percent chance that a calico cat is male.

Since it is rare for a calico cat to be male, it is rarer to find two male calico cats. This is entirely a statistical point that refers to the difficulty of finding two rare species.

Is it normal for a calico cat to have two calico kittens?

It is rare for a calico cat to have two calico kittens. That is simply because of how the genetics of a calico cat work. A calico mother will have one X chromosome for both orange fur and black fur.

Whenever it mates with a male, that male will have a single X chromosome, which is coded for either orange fur or black fur.

It’s completely up to chance as to which chromosome the offspring receives. For starters, it could receive a Y chromosome from the father. This will mean that the kitten is not a calico under normal circumstances.

Even if it gets the X chromosome from the father, it is up to chance as to which chromosome it gets from the mother.

For a calico cat to have two calico kittens, the two kittens likely have different fathers. That’s because it is more statistically likely for a calico mother to produce a calico kitten from two separate fathers.

With that being said, it’s possible for the same cat to father two calico kittens, but it is highly unlikely.

Why can’t two calico cats have the same fur pattern?

Since all calico cats have genes for both orange and black coloration, you might wonder why calico cats all look so different. The answer is rather simple: the expression of the gene is completely up to chance.

In other words, the patches, shape, and position of the colorations are completely random.

It may be convenient to think of this analogy: whenever you toss a coin, it is completely random which side it will fall on, but it will always land on one side. The same happens for expressing genes.

Though a calico will express both colors, every individual cell practically tosses a coin when it comes to expressing the orange or black color. This creates completely new fur patterns on every calico cat.

Do calico cats have special personalities?

Calico cats have a notorious reputation for having a feisty and unique personality. Many people who have owned calico and non-calico cats alike agree that calicos have unique personalities. Though owners love all their cats, they note that the calico was the most unique.

Do calico cats allow other cats to pick on them?

A cat coat is not a good determiner of their personality or likelihood to stand their ground. However, many calico cats are likely to stand up whenever other cats or animals pick on them. This may be attributed to their feisty personality.

At the same time, many calico cats are skittish around other cats. Some vets predict that this goes back to their unique genetics. Most creatures with unique genetics tend to be more protective of themselves because of their rare genetic sequence. As a result, some calico cats may have an instinct to retreat whenever cats pick on them.