Why Does My Cat Yell At Me In The Shower?

Why does my cat yell at me in the shower?

If you haven’t fed them yet, then it may be hungry. Some cats assume that you are in danger. It can also mean that your cat wants to play. Finally, when you take a shower, you are washing off your cat’s scent and they simply cannot understand why you would want to do that!

So, now you know. But, how can you prevent this? Should you even be leaving the bathroom door open? Can cats detect a different scent after you shower? Keep reading for these answers, and much more…

How can you prevent your cat from yelling when you shower?

This is where things can get tricky. The first thing to try is simply closing the door. This doesn’t work with all cats, of course, and some of them might scratch at the door in a panic.

A second thing that you can try is simply peeking out every now and again, especially if you take long showers. Some cats respond well to leaving the door open so that they can watch you.

They’ll pop up and sit on the closed toilet and keep a watchful eye and when you are finished, just be careful about how you dangle your towel – you don’t want any playful scratches when you aren’t yet dressed.

A ‘pre-shower ritual’ is a final strategy that you might adopt. You might, for instance, put out a fresh bowl of food for them every time before you shower or give them a quick play session or some cuddles first.

Cats are very much creatures of habit, so over time they will learn this ‘shower ritual’ and they should give you a little time to shower in peace.

Should you leave the bathroom door open while you shower?

This is going to be between you and your cat. Some cats really seem to enjoy watching their owners take a shower, while others will make tracks quickly to go somewhere else. Some owners even compromise by minimizing the ‘splash potential’ and taking a long, soothing bath with a book and their cat perched comfortably nearby.

Basically, if you don’t mind the bathroom being a little colder and if it comforts your kitty, it’s perfectly fine to leave the door open.

Can cats detect a different scent after you shower?

Yes, your cat can definitely smell the difference. Cats rely on scent much more than their eyesight, in many cases, and it’s reflected in their physiology. Cats have numerous scent glands in areas such as their faces, flanks, and their paws, and this is one of the reasons that they knead at you and brush against the furniture – they are transferring scents.

A new cat that seems confused or runs away after you’ve taken a shower is a good example of this. They’ve smelled you before getting a good look and then run away, just to be on the safe side.

As your cat gets more used to you then this behavior will eventually disappear, but until then those showers that make you smell like soap and shampoo are alarming for your cat because you keep washing away the scents that they keep painstakingly putting on you.

How do you know if your cat is upset about your scent loss?

Watch to see if a lot of kneading (click here if your cat has stopped kneading) or brushing against you occurs after the shower.

If so, then your cat is re-scenting you and you have your answer! As you can see, this behavior depends on the cat and the context, and there are several reasons why it’s doing this.

Why would a cat sit on its owner’s head in the shower?

On rare occasions you’ll find a cat that will go into the shower with its owner, perching on top of its head throughout the cleansing process. Likely they feel safe because such a high position can help them to spend time with you while staying out of the direct line of the blasting water.

That said, we can’t recommend trying to teach your cat this as they will likely panic and will be very close to your eyes while they do so! If you decide to proceed anyway, please do so with swimming goggles, and consider the possible ramifications. Most cats do NOT like water and you may frighten your poor kitty into a phobia of the bathroom or worse.

Do some cats feel the need to rescue you in the shower?

Your cat may well be worried. If your cat hates water or views it as dangerous, then your act of stepping into it voluntarily one or two times a day can make them think that you are in danger. It is also possible that they know that you are wiping off their scents and their concern is more of a form of protest.

It may also simply be the fact that you’ve gone somewhere to do something that they cannot participate in, but with many cats, it does appear to be actual alarm. Try leaving the door open so that they can see you and see what happens. In many cases, this little compromise will do the trick nicely. 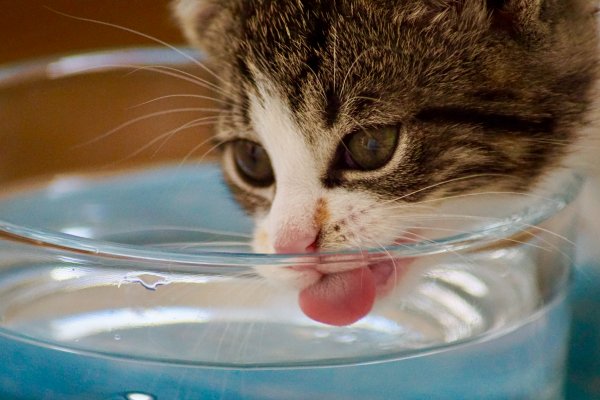 Cat drinking water from a bowl.

Most cats do not like water, but there are definite exceptions. If you can get them used to a little warm water when they are young, by the means of warm trickles and toys to make them feel comfortable, then you might just end up with a water-loving cat when your kitty gets older.

That said, some cats will never enjoy the water, especially when it comes to the shower. Showers are associated with scents like soaps and shampoos and while these smell nice to us, to a cat they just smell like ‘weird chemicals’ and they likely remember previous bath times that you’ve subjected them to here.

Bottom line: Some cats like it, some cats don’t!

Do some cats want to be in the shower with you?

Yes! While it’s rare, one of the joys of having a feline friend is their individuality, and for some cats, this includes an actual love of playing in the shower. Usually, this is a behavior that you may see in cats that have been weaned very early and who were introduced to water very carefully. Some cats even like to play ‘dodge’ games with a water gun!

It all depends on your kitty and their personal opinions on the subject of water.

Why is my cat hissing at my other cat after I took it in the shower?

It’s all about the smell. Cats rely heavily on scent to give them a predatorial edge, so it’s only natural that when they see a cat-shaped creature that smells of soaps and shampoo that their first reaction is to be defensive.

If both cats have cohabitated for a long time, however, it could also be a little jealousy that you took one cat into the shower and that they perceive this as ‘playing favorites’ since they didn’t get to go too.

Why does my cat start yelling when the shower is just running?

While running water is something that we’ve come to take for granted, from your cat’s point of view that is simply dangerous, splashing water. Even if it’s not a fear of the water that the faucets are producing, the sounds are also quite strange and disturbing for some cats and they simply do not understand what is happening.

Some cats may be conditioned against this by a safe, careful introduction to the sounds. Put your cat on the sink and give them a treat and then carefully turn the faucet on to the slightest trickle. Step away to let your cat investigate so that they can see what’s going on.

Your cat may panic and bolt, but it’s also possible that they might start lapping up the water or give it a swat or two as they investigate, but as long as the introduction is very careful and full of reassurance then this should help to reduce their panic when they hear the sounds of running water.