Why Does My Cat Squeak When I Pick Him Up? (9 Reasons)

Why does my cat squeak when I pick him up?

Your cat may squeak when you pick it up because it is either unhappy to be picked up, quite young, and still developing its vocal cords, or you picked it up incorrectly and caused it pain or discomfort. If it’s unhappy or incorrectly held this can be corrected.

So, now you know. But., is it normal for a cat to squeak? What can you do to prevent this when you try to pick it up? Can an allergy cause this sound as well? Keep reading for these answers, and much more…

9 Reasons why my cat squeaks when you pick him up: 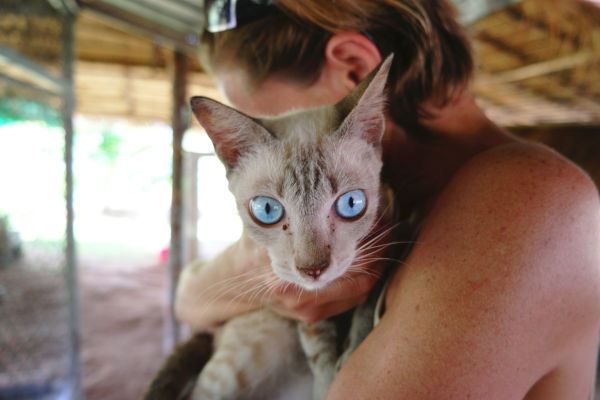 Earlier I briefly mentioned some reasons why your cat may be squeaking if you pick it up. In this section, I will explain each one in greater detail:

If your cat does not like being picked up by others, or even by you, it may give a vocal response like this. It may be a one-off, and the sound came out awkwardly or a long-term sound that some cats just have, or a new cat (more on this later).

Either way, it is a way to show you that it is not happy and give you a vocal response.

02. Being picked up incorrectly

Some cat owners may not pick their cats up correctly. When this happens it can cause some pain, or discomfort to the cat. And, the feedback could be this weird squeaky sound.

For other cats, who are picked up incorrectly, the sound could be a scream or a deep meow. But, it just depends on the cat.

Some new cats, meaning young cats, or kittens, may still be developing their vocal cords. And, when this happens they may let out random squeaks like this.

Sometimes when you go to pick up your cat they will squeak as a way of saying ‘I like this’ or to say ‘you do realize that I don’t like this, right?’. In these cases, the squeak is not an involuntary response, but it is there to be heard and to get your attention.

You’ll want to listen for the tone and pitch. If it’s a high-pitched sound, it will either express surprise, or it could even be angry, but a friendly little squeak is just as common when your cat is happy that you’ve decided to pick them up.

A surprised-sounding squeak, followed by a bit of wiggling in an attempt to escape your grasp, might indicate that your cat is in pain. This could be from playfighting, an improper jump that has hurt one of their legs or even developing health issues such as arthritis.

If you notice that your cat is making a pained squeak when you pick them up, even though no visible injury is readily apparent, then it’s best to bring them in for a checkup right away so that your vet can get to the bottom of the issue.

06. Fear (Bad experience from the past)

A quick, high squeak, when picked up, can sometimes prove to be a fear response, especially with rescue cats that may associate being picked up with a bad previous experience. In cases such as this, the best thing that you can do is avoid picking them up for a while, but rather work on building a little trust.

Give them lots of attention and treats and when you DO try to pick them up again, move your hands slowly and pet your cat a little first before picking them up so that when you do lift them then they are expecting it and your slow movements can inspire a little trust.

Once your cat knows that you aren’t going to hurt them, these little fear-squeaks should become a thing of the past, but you’ll need to be patient with the process – it takes a while to replace those bad memories with the good ones.

07. Haven’t established a real bond yet

Sometimes a quick, surprised squeak, when you pick up your kitty, is just a response that means ‘hey, I don’t know you very well. What are you doing?’.

Some cats are very easy-going, and while they’ll let you pick them up, they will squeak a little protest to let you know that you are being familiar with someone they don’t know yet. Don’t worry – once your cat gets used to you, then this will happen less often or even not at all.

It just takes a little while to earn your cat’s trust.

08. A challenge to your authority

A low-pitched squeak that often turns into a growl is a challenge to you as if your cat is saying ‘how dare you to pick me up!’. These squeaks of protest can and do occur and they mean that your cat is objecting to being handled without their permission.

This is adult behavior and it’s a good idea to pay attention when this occurs, as your cat might not be so nice about it next time. In the future, make your intentions known, by petting your cat first and picking them up slowly, rather than simply ‘scooping them up’.

This gives your cat a chance to back away or to let you pick them up ‘with their blessing’.

Sometimes that squeaking can be health-related. For instance, in the case of allergies, congestion in the lungs might force air out inadvertently from the pressure you cause when you pick up your kitty. A condition of the larynx is also a possibility, as this can turn a robust meow into a pitiful squeak.

With allergies, you’ll only hear the squeaking when you pick up your cat, but a larynx condition will result in a ‘damaged’ sounding meow – either way, it’s time for a trip to the vet to determine your next steps.

Is it normal for a cat to squeak?

Many cats do squeak, but not a lot of people know this. There is a whole subreddit dedicated to this with thousands of members. So, there are many out there.

Even with this large community of cat owners with videos of their cats squeaking, there are still many that are shocked to hear they can do this. And, I empathize, because I was the same until I looked into it.

How can you prevent your cat from squeaking when you pick it up?

If you are concerned, or just interested to know how to stop your cat from making this squeaking sound, specifically when you pick it up, here are some tips depending on the underlying reason for this happening:

If your cat I not happy to be picked up then you have two options here leave it and accept it or train it to accept it. Obviously leaving it is the easiest and arguably, the preferred method.

However, if you are adamant that you want to pick up your cat then you can train it. This will require some cat treats (Click here to see the reviews, on Amazon #Ad) and a lot of patients.

If the cat is young and still developing its vocals then the best bet is to be patient and hopefully, it will develop its vocal range and start meowing instead.

However, this may not change its response to being picked up, it may just change the sound it makes. But, hopefully, in time it will get more used to you and be more comfortable with this as well.

03. Being picked up incorrectly?

If your cat is squeaking because it’s being handled incorrectly then you need to adjust this to stop it from happening. When you lift a cat you should make sure it is correctly supported.

This includes one hand and some of your arms under the front legs, and the other supporting the back legs. Also, the cat should be held close to your body, not out like a trophy. Your body will offer comfort and extra support.

Can an allergy cause your cat to squeak?

Allergies can cause a cat to squeak. According to the feedback from some cat owners, the belief is the windpipe can get slightly blocked as a result causing the vocal cords to be distorted.

However, allergies is quite a broad term, this could be anything from food, drinks, types of material used for pet accessories, etc. So, if this is the concern you will need to consult your vet to find out what it is, and the best way to deal with it.

Why is my cat making a squeaking noise like a toy?

If your cat is squeaking like some mouse toy you may be scratching your head with confusion. But, it could be because it’s just young, for example, a kitten under eight months old. And, if it is, it may just need time to develop.

However, if it’s older than that and just randomly started doing it, it depends. Has it ever meowed properly before? Is it happening consistently? If yes, could be an issue. A one-off? Well, maybe not.

However, in any case, if you are concerned you should consult your vet to clarify if it is an issue or not.

Is it normal for a cat to squeak and bite while playing?

Some cats squeak and bite while playing. This may be because it gets overexcited or has some issues with aggression. The high-pitched squeak is an indication of its excitement.

Why do some cats squeak when they jump down?

There have been reports of cats making a squeaking sound when they jump down from a height. This does not mean there is an issue with the cat. But, in some cases, there could be but it is never reported to the vet or analyzed and the cat lives happily with it.

Personally, if you hear something like this and it sounds odd, you do not have much to lose, why not get it checked out to be safe, right?

How can you condition your cat to be picked up?

To get a cat conditioned to being picked up, or handled you need to use a slow cycle of associating positive experiences with the act of being handled.

For example, rather than trying your luck and randomly picking it up, offer some treats (Click here to see the reviews, on Amazon #Ad). While the cat is eating offer it some gentle petting, and right after.

Take your time at first. Then gradually increase the petting time. In time, hopefully, your cat will allow you to handle or pick it up.

Why should you let a cat sniff you before you pick it up?

You should let a cat sniff you before picking it up because they need to familiarize themselves with you first. If they do not know you and you go in to pick them up right away they could react negatively.

This is one of the reasons some cats may hate your dad, friends, or other family members, because they may not get this.