Why Does My Cat Sleep With His Bum Towards Me?

If your cat has a habit of sleeping with its bum towards you, you may find this weird and wonder why it’s happening…

Why does my cat sleep with his bum towards me?

When your cat sleeps with his bum facing you or even sleeps close to you, this is actually an indication that you have his complete trust. Your cat loves you and knows that you are not a danger to him and so he feels that he can leave his back exposed.

So, now you know. But, what is a cat’s normal sleeping position? Should I be worried about this? Why does my cat raise its bum when I pet it? Keep reading for these answers, and much more…

Contents show
1 Why does my cat sleep with his bum towards me?
2 Does your cat’s bum position indicate predatorial behavior?
3 What is the normal position for a cat to sleep in?
4 Should I be worried if my cat sleeps with his bum towards me?
5 Why does my cat raise his bum when I pet him?
6 Does a cat’s raised tail signify friendship?
7 Is it normal for a kitten to show its bum to its mother?
8 Do cats feel shame exposing their bum to you?
9 Should I discipline my cat for sleeping with its bum towards me?
10 Why do cats sniff each other’s bums when they greet each other?
11 How do I get my cat to cuddle at night? 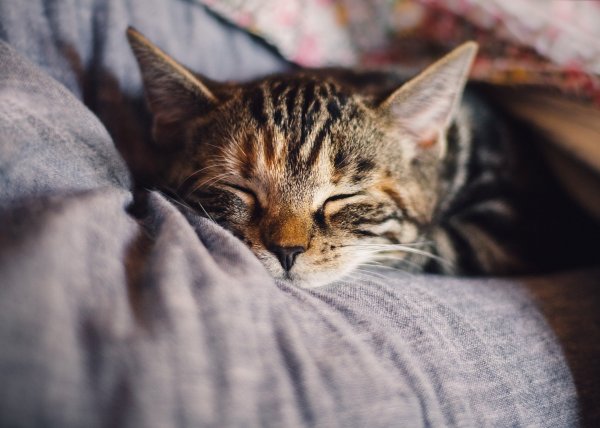 Cat sleeping on the covers.

By facing away, he is also demonstrating typical predator behavior. You’ve got his back covered, so he is in a perfect position to attack or defend against anything that comes from the side that he is facing. Your cat isn’t snubbing you, but rather is guarding the both of you.

What is the normal position for a cat to sleep in?

That depends on the cat and how comfortable that they feel. Some cats will roll into a half-twist and sleep with their bellies exposed, for instance, though most commonly your cat may sleep on their side or on top of both paws and face the door.

Cats are excellent predators, with the ability to spring into action at the slightest sound, scent, or touch that seems out of place – even sleeping on their sides. That said, the most common position for a cat to sleep in would be ‘any, so long as they are facing the door’.

Your cat understands that this is where a threat could come in and so they address it by sleeping that way.

Should I be worried if my cat sleeps with his bum towards me?

No, you should actually be flattered. When a cat decides it’s okay to sleep next to you or even anywhere near you, it’s showing you that it trusts you. The closer your cat sleeps to you, the more they trust you, and a cat that sleeps in your lap or on your chest trusts you completely.

Cats don’t have the same derogatory association with their bums that we do, so if your cat’s bum is facing you when they are sleeping then don’t take offense – your cat is just showing you that they trust you enough to present their back. No predator would do this without 100% trust.

Why does my cat raise his bum when I pet him?

Cats rely on their sense of smell more than any of their other senses. You’ve probably noticed if you have another cat or a dog at home that your cat will often sniff their bum. Cats have scent glands there, as well as on their faces and paws, and when one cat sniffs another cat’s bum they can tell all kinds of information.

The scents can tell them if they are related, for instance, and give them a profile of the other’s cat’s health. So, when your cat is raising their bum, as gross as it seems to you, your cat is actually giving you a ‘cat honor’ by inviting you to learn more about them by their scents. It’s a little strange to us but perfectly normal for cats!

Yes. It is a sign of both affection and trust. As your cat has scent glands here, if you were another cat then sniffing these would tell you all kinds of information about your cat. As a predator, it is a huge mark of trust, because if you meant the cat harm you would have the opportunity because the cat is presenting you with their back.

When your cat raises its tail, it’s a sign of love and trust, and you’ll see this sometimes between a cat and a dog if you have more than one animal in your house and they love one another. It’s simply an invitation to ‘sniff’ and learn more about the cat.

As weird as it is, that’s simply one of the ways that cats communicate – through the language of scents.

Is it normal for a kitten to show its bum to its mother? 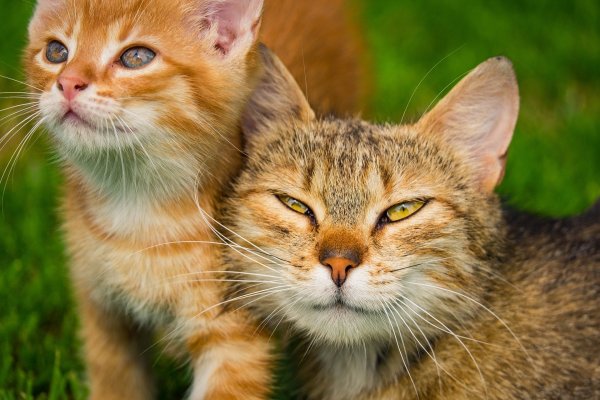 A cat and her kitten snuggled.

Yes, this is completely normal behavior. When they are too young to go potty on their own, the mother will lick her kitten’s bums in order to stimulate them ‘using the bathroom’. The mother can also tell if the kitten is healthy by the scents which she picks up when she sniffs her kitten’s bums.

Scents are very important to cats, which is why you see them rubbing against the furniture or simply rubbing against you – in the case of such rubbing, scent glands in your cat’s face are actually putting their own scent upon you, as a way to mark you and to make their home environment smell like them.

From a predator’s perspective, this is a very good idea – any scents in the environment that don’t smell like kitty are instantly suspicious. This is one of the reasons that a dog at home can sometimes drive the cat a little crazy and why some cats get suspicious or even run from their owners after a shower – if it smells wrong, it’s possibly dangerous!

Do cats feel shame exposing their bum to you?

None whatsoever. To another cat, an exposed cat’s bum is a sign of trust and an invitation to get to know each other better. The scents produced from the scent glands in a cat’s bum help to identify who they are, whether or not they are related, any health issues that they might have, and even recent meals!

Cats don’t association the anus with shame, but rather with a ‘greeting’ reserved only for those that they trust. So, when your cat exposes their bum to you, it’s actually a very good thing. They’re inviting you to smell them and learn more about them.

Should I discipline my cat for sleeping with its bum towards me?

Definitely not. Disciplining your cat for sleeping with their bum towards you would be a huge mistake because they are showing you an enormous level of trust. In the wild, leaving your back unprotected is a sure way to get yourself killed, so by sleeping this way around you your cat is honoring you with their complete and total trust.

If your cat sleeps with their bum towards you, then take it for the compliment that it is. Your cat is saying ‘I love you and I know that you’ve got my back!’.

Why do cats sniff each other’s bums when they greet each other?

Cats sniff each other’s bums as a way of greeting because the scents produced by the glands there basically tell them all about the other cat. They will know right away if they are related, for instance, and they will also know if the cat that they are sniffing is in heat or if that cat might be ill.

Cats have what is called a Jacobson’s organ, also known as a vomeronasal organ, and this is something that they share with snakes. When you see a snake flicking its tongue at the air, what you don’t see is that it sends particles into the roof of the mouth so that their Jacobson’s organ can ‘analyze’ these scents for more data.

Cats can do the same thing, basically ‘tasting’ scents and learning about the environment or in this case, about the other cat. Scents in the air or coming from the other cat have quite a lot of data to them, humans just don’t have the same equipment for decoding it that snakes and cats do.

It’s an amazing ability and just one of the many things that makes a cat such an amazing predator.

How do I get my cat to cuddle at night?

Getting a cat to cuddle with you is mostly a matter of patience. As their trust grows, they’ll be more and more comfortable sleeping close to you as time goes by. You can speed up the process a little by sprinkling some catnip on the bed but you’ll want to make sure that you don’t grab them or force the process if your cat wants to leave.

Trying to force them can make them mistrustful of you and they might even start avoiding the bed altogether. If your cat wants to leave, simply let them do so and keep trying – you’ll get there!

Another thing that you can do is to get a kitty tower and place it close to your bed. The best kind has toys built-in, but if you got a model that’s a tower only, you can always put things like catnip and toys inside.

The tower makes it easier for your cat to play and to watch you and its proximity to the bed will help to tempt them to jump up and join you.

Finally, invest in a nice, fluffy comforter. Cats love settling into soft surfaces for a nap, and once your cat sees the comforter and walks on it then more likely than not, they are going to ‘take it for a test nap’.