Why Does My Cat Pin Down My Other Cat? (Love or Lust?)

If your cat is pinning down another cat you may be shocked and wondering why this is happeing, and if there is anything you can, or should do about it…

Why does my cat pin down my other cat?

There are many reasons why your cat pins down the other. When a new cat comes into the established territory of another, understand this is normal. So, often it’s a sign of dominance, but it could also be an expression of breeding or for fun.

So, now you know. But, how can you prevent this? why would a male cat pin down another male? Why is my cat doing this to a kitten? Keep reading for these answers, and so much more…

Contents show
1 Why does my cat pin down my other cat?
2 3 top reasons why a cat may pin down another cat:
2.1 Breeding Stance
2.2 Dominance
2.3 For Pleasure
3 How do you prevent your cat pinning down your other cat?
3.1 Neutering
3.2 Separation
3.3 Only Have One Cat
3.4 Separate Newcomers
3.5 Give Each Their Own Space
4 Why would a male cat mount other male cat?
5 Can fixed male cats still mate?
6 Could a cat pin down another cat while they play fight?
7 Why does my cat bite the neck as it pins down my other cat?
8 Why does my cat pin my kitten down?
9 How do I stop my male cat from mounting?
10 Can a neutered male cat live with an unneutered female cat2?

3 top reasons why a cat may pin down another cat: 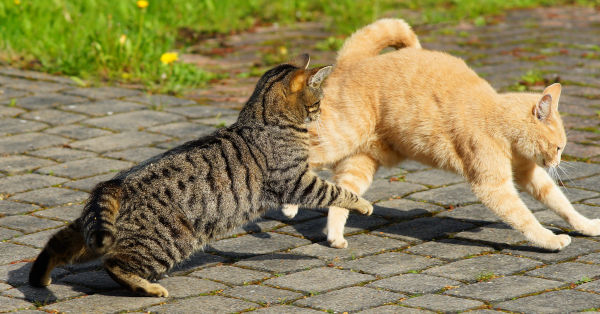 A striped cat play fighting with a ginger cat.

Earlier I mentioned, brielfy, some reasons why yiur cat may be pinning down your other cat. Therefore, in this section I will explain, in more detail, why this may happen:

One reason for cats to engage in pinning is because of a natural propensity toward breeding. If you have an unneutered male, he will mount another cat in a breeding stance as a means of expressing this instinct.

The most common reason why most cats pin other cats down is to exercise dominance. This could be due to predation, poor socialization or because the dominant cat has a medical issue.

Cats are playful, especially kittens. This often means pinning other cats down along with biting around the neck and ears. The signs of this will be evident and it’s not a cause for intervention. This will be especially true if the new cat instigates the other one in a bout of rough-and-tumble.

How do you prevent your cat pinning down your other cat?

There are a couple of different approaches you can try to stop a cat from pinning down your other cat. Do not use physical punishment; this will not glean the results you seek.

Neutering your male cat will not only be better for his overall health, but it will also curb mounting or pinning behavior. But, the effects of this aren’t immediate and it may take some time. However, he won’t be able to reproduce.

Although difficult to do, you can try separating the cats. This will depend on intensity and how much respect you are able to command from both cats. However, using a firm tone without yelling will be best. Some cats are easily spooked by the sound of “psst” followed by or accompanying a finger snap.

The point is to try and quickly distract the cat. If your efforts don’t dissuade the dominating cat, you can grab the scruff of its neck. However, if the cat has its claws dug into the other cat, don’t pry it away. You want to see if the cat lets go.

If it’s holding on for dear life, you will have to make some kind of loud noise. Turn on the vacuum or other loud contraption, this should do the trick.

Only Have One Cat 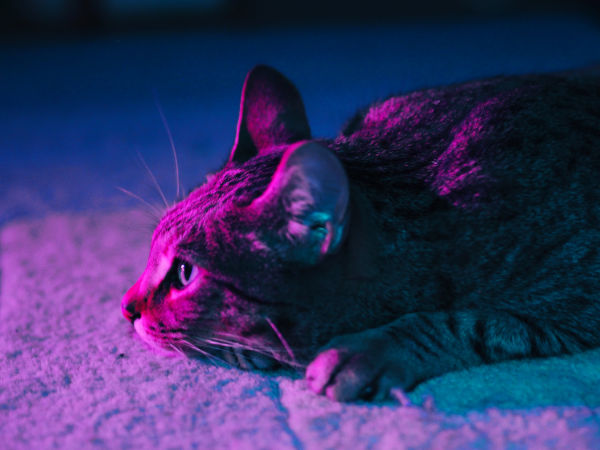 A cat laying down looking sad/stressed.

If you know your cat is very territorial and predatory, don’t bring home another cat. It’s the only surefire way to prevent mounting and pinning issues from beginning in the first place.

You can control dominance issues by socializing newcomers slowly. If you can manage it, put the new cat in the bathroom and keep the door closed for at least 10 days. Since kittens don’t require a lot of space, this is much easier to achieve.

During this time, gradually introduce the cats to one another. Let them sniff each other under the door and only let the new cat out of the bathroom after a day or two. You can increase the length of time over the course of 10 days. But follow the lead of the residing cat. Don’t force the new cat onto the one you already have.

You can also use a cloth between them. Rub it on the resident cat first and put it in their favorite resting spot. When you go spend time with the newcomer, let them sniff it and leave it with them for a day or two. Interchange this material between each cat throughout the 10 day period.

Give Each Their Own Space

Allot each cat their own space for food, water, toys and the litter box. If there’s a lack of space, try to put some distance between food, water and litter boxes.

Why would a male cat mount other male cat?

As is most often the case with unneutered cats, mounting equates to breeding. Although rare, it does happen that a male cat will mount another male cat out of instinct. If the other cat is submissive, the dominating cat will succeed with penetration.

Yes, fixed male cats can still mate but pregnancy won’t become an issue. They will merely engage in the act of reproduction.

Could a cat pin down another cat while they play fight?

Yes, cats can pin each other down when they play. In some cases, it will be a tit-for-tat type of game. You can think of it like children playing “Tag.”

Why does my cat bite the neck as it pins down my other cat?

Neck biting that accompanies pinning down can be because of several different factors. If it’s a kitten doing the biting, chances are, it’s only playing. But, if it’s a residing cat biting the neck of a newcomer, this could be due to dominance or also because it’s being playful. However, if the cat doing the biting is a virile male, it could be attempting to breed.

The best way to tell the difference is by the dominating cat’s appearance. If it has a puffy tail with its ears down, it’s a sure sign of aggression. This biting behavior shouldn’t draw blood or cause any other injury though. Only in the case it’s clearly violent should you worry. Most cats will outgrow this behavior.

Why does my cat pin my kitten down?

Cats are playful and will bite their normal mode of playing. Understand that it’s crucial you let this happen and do not intervene. But keep your eye on it prevent thing from getting out of hand and for overly aggressive behavior.

How do I stop my male cat from mounting?

If your male cat is insistent with mounting, use a water bottle to spray the cat. This should get him to stop quickly but this is only a temporary solution.

Can a neutered male cat live with an unneutered female cat2?

Yes, a neutered male cat can live with a female cat that is not spayed. When she goes into heat, chances are, he won’t engage with her. But, if he does, she won’t get pregnant.