Why Does My Cat Meow So Much After Having Kittens?

If you have noticed your mother cat (queen) meowing a lot after birth, you may be wondering if this is normal…

Why does my cat meow so much after having kittens?

But also, she could be trying to communicate with kittens. Their eyes and more importantly ear canals open slowly and in the first weeks of their lives, the queen needs to raise her voice to be heard.

Is it normal for a cat to meow after having kittens? 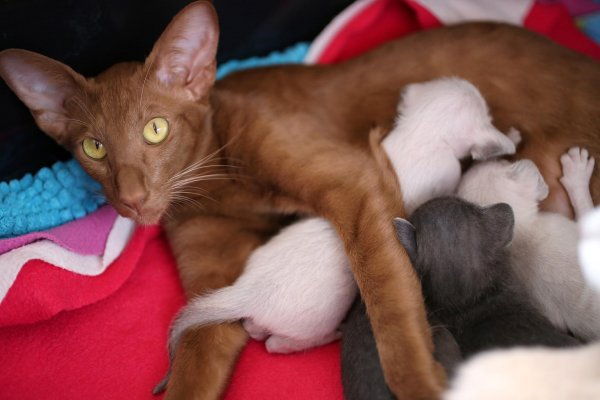 Yes, it is perfectly normal. The queen may start meowing very loudly because she is in heat again, but also as an attempt to communicate with her kittens that still don’t have fully opened ear canals, which makes them very hard of hearing. This behavior is expected.

Another possible reason for the queen to meow loudly in the weeks after giving birth is tiredness from her parental duties. Sometimes, the queen will meow trying to call her mate, to spell her for a bit so she could get some rest.

What is normal behavior for a cat after giving birth?

After giving birth to her kittens, you will notice some new behaviors from the queen. First, as expected, she will be tending to her babies, nursing, bathing, and nuzzling with them. If she doesn’t feel warm, safe, or protected enough with her kittens, she might move them to a different place.

She will also change her behavior towards you. Queens are very protective of their babies, so they would like you to keep your distance from kitties in the first couple of weeks. But, even if she lets you near kittens, she will stop being cuddly and playful with you as before. Because she’s keeping watch over her babies.

How can I keep my mother cat comfortable after having kittens?

Making your queen comfortable is very important for her to settle into the new role that will keep her very busy in the next couple to few months. You should make sure that the room in which she is with her babies is warm and quiet. So she would feel safe and kittens don’t get cold.

Make sure that their beddings are clean and dry, especially from the second week after the birth when kittens will start doing their business in the bedding.

Is it OK if I touch the kittens right after birth?

It is and it isn’t. It depends on the relationship with and attitude of the queen towards you. Many people will tell you that by handling the kittens they will get your smell, which will make the queen stop nursing them. This is only somewhat true, as it takes days for the queen to forget her baby.

A queen can be very protective of kittens, and not feel very protected by you, or even feel that her babies are not safe with you. She will make it very clear if this is the case, and in such a situation you should not touch them.

Can cats go crazy after having kittens?

Having kittens is very stressful for queens, and they will be very protective of their newborn babies. During this period even the cuddliest kitties can become almost feral behaving because they feel insecure and in need of protecting their babies.

New queens can even become very aggressive toward other cats, even if they are completely uninterested in the kittens. This is an instinctive behavior because male cats in the wild often kill newborn kittens. This is also the reason queens can be overprotective of their babies.

Do cats meow a lot when they’re about to give birth?

Just like human labor, cat labor is very laborious and painful. During it, your queen might meow, howl, and make chirping and screeching sounds. It is very rare for queens to go through labor with only panting, but don’t be surprised if they do. It is very rare but can happen.

Before the whole ruckus starts, your cat will become restless and might be pacing around. And when her water breaks, she will start licking her vulva. By this, you will know that her labor has started.

What should a mother cat eat after giving birth? 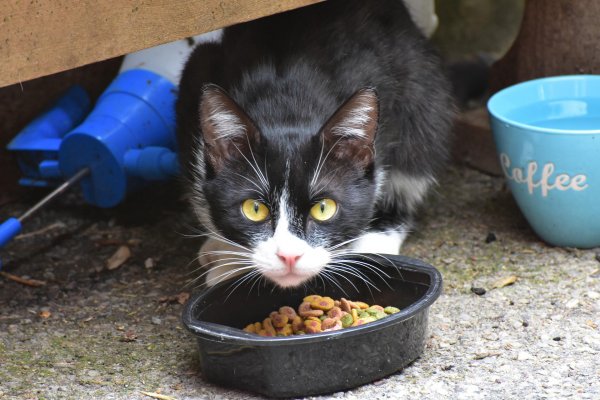 Black and white cat eating from a bowl.

The best is to feed her with specially formulated high-quality food for queens and kittens. But as a rule of thumb, food for kittens is the proper choice. Make sure that she has a high enough caloric intake, to be able to produce enough milk for the kittens. You can combine dry and wet food, and kitten milk formula is also appropriate.

If your queen is a picky eater, you can feed her canned tuna, salmon, or boiled chicken, but it is a good idea to in such a situation boost her nutrient intake with formula.

How do you tell if the cat still has kittens inside?

Sometimes one or more kittens may be “stuck” and still not coming out. And this you can easily recognize by the behavior of the queen. She will be panting and making a lot of noise. But also you will be able to notice that she’s straining. If she allows you to look at her behind, you can notice a fluid-filled bubble sticking from the birth canal.

She could also be licking the vulva, trying to rip open the amniotic sac in which a kitten is. But the most certain sign is the lack of placenta being discharged. It will come out after the last kitten.

Can you move kittens after birth?

You should try to make the queen as comfortable as possible with her newborn kittens. There is no need to move them, as she will most likely have already made them a comfortable place to lay around her. If you try to move them, because she will be overprotective about them, the queen could hiss at you.

But also, after you move them, she could just return them where they were original. If the queen doesn’t feel that her kittens are protected or comfortable enough at some spot, she will move them herself to a better one. But you shouldn’t do it yourself.