Why Does My Cat Gag At Certain Sounds? (Is It Normal?)

Why does my cat gag at certain sounds?

Certain sounds are believed to make a cat gag because of the range of sound they can hear. They are known to have highly efficient hearing that they use for hunting their prey. In fact, their level of hearing is often referred to as ultrasonic. Meaning, they can pick up on sounds that we humans cannot.

So, now you know. But, are cats generally sensitive to sounds? Is gagging a necessary bodily action? Should this be something to be worried about? Keep reading for these answers, and so much more…

Contents show
1 Why does my cat gag at certain sounds?
2 What is gagging?
3 Are cats sensitive to sounds?
4 What other sounds can make a cat gag?
5 What food will make cats gag?
6 What causes a cat to gag?
7 Is a cat gagging necessary?
7.1 My experience with this mouth, nose, and ear connection…
8 Can the sound of tin foil crinkiling affect cats?
9 Can the teeth of the comb being rubbed cause a cat to gag?
10 Should your cat gagging be a cause for alarm?

Gagging is a reflexive action and is often associated with retching. It is actually an automatic reaction used to reject unwanted food or objects from the body in a state of emergency. However, it can be triggered in other ways such as cats and certain sounds.

When the term gagging is mentioned most people assume it relates to food. And, in most cases it is. But, it is not the only way to trigger this. Later you will learn how everyday sounds that you hear can trigger a gagging reflex in some cats and why this is needed to happen.

Are cats sensitive to sounds? 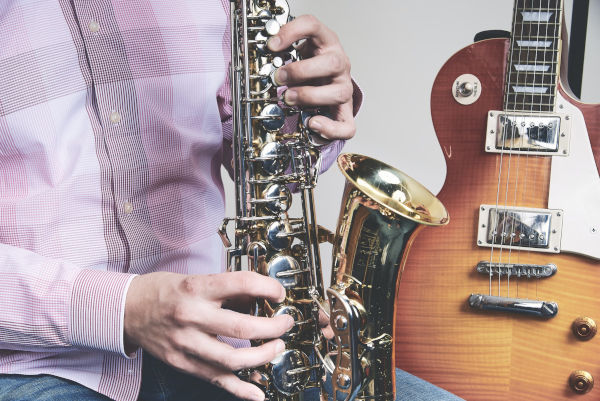 A saxophone being played next to a guitar.

Cats are sensitive to some sounds. Like us, human’s loud or unexpected sounds can alarm or scare them. But, because they have a higher level of hearing they are sensitive to other sounds that may seem trivial to us.

This is because their ears can pick up sounds that, as humans, we cannot appreciate. Have you ever seen a cat hop up and react to something when you have noticed nothing? Well, this is a basic example of how their hearing is on another level.

What other sounds can make a cat gag?

Several sounds can make a cat gag. One interesting sound that is known to trigger this is the sound of keys jingling. To us humans the sound is nothing but because cats can hear frequencies we can’t they can react very differently to it.

So, if you have ever seen a cat react weirdly, or gag to a simple sound like keys jingling, you now know why something like this may happen. Later on, you will learn how other sounds, like tin foil, can cause similar reactions in some cats. Also, how a certain syndrome can make this happen from other basic sounds.

What food will make cats gag?

Several foods can make a cat gag. One of these is citrus-based foods, like lemon. These are known to cause cats to gag. And, is one of the reasons it is often used as a repellent for cats (Click here to see the reviews, on Amazon #Ad).

Other foods such as Mint or menthol are also rumored to cause similar effects. It is best to avoid these around your cat to keep them safe.

Some smart people may notice that catnip is in the same family as mint but even so, catnip does not have the same effect. This may be confusing because catnip is used quite often by many cat owners.

What causes a cat to gag?

Most cats will gag when food or another object comes into contact with their larynx. Sometimes just getting close to it will cause it to do this. You will notice the cat retch, push its neck out and often open its mouth as much as possible.

This is just its bodies way of attempting to reject the food, or object that its body belives is infiltrating its safe zone. If you have ever seen a cat doing this you will know exactly what I mean as I attempt to describe this.

Have you ever tried to brush your teeth and accidentally push the brush too far back and gagged? Well, if you have, this is a similar reaction that I am trying to explain here.

Is a cat gagging necessary?

Gagging is necessary for cats. It is their body’s way of rejecting some food, or object that is undesired. This can be a life-saver if something harmful was about to enter their body. It is similar to how we humans handle the same situation.

However, the big difference between cats and humans is the other things that can trigger this such as sounds like jingling keys. It is believed that the fact that their ears, throat, and nose are connected, which could trigger this.

My experience with this mouth, nose, and ear connection…

This connection of nose, ears, and mouth is similar to us humans. I remember, when I was young, finding this out the hard way. Basically, one afternoon myself and my brother were playing a game with grapes.

This entailed me catching the grapes as my brother threw them to me, the problem is I had too much in my mouth and somehow one of the grapes came up through my nose, I kid you not. I was worried that I nearly choked.

Can the sound of tin foil crinkiling affect cats?

The sound of tin foil crinkling can affect some cats. This is one of several sounds that can be triggered. However, this is specifically for cats with Feline Audiogenic Reflex Seizures (FARS). And this condition can cause seizures from common sounds in the home.

Other basic day-to-day sounds that can cause this include the ruffling of paper, coins jingling, etc. As you can see these are basic sounds. Obviously, if you have a cat that can be triggered like this you will need some advice from your vet on how to avoid unsettling your cat.

Not all cats will react in this way because some cat owners have been known to use tin foil to repel their cats from surfaces without experiences these harsh reactions. But, they are known to dislike the sound regardless.

Can the teeth of the comb being rubbed cause a cat to gag?

There have been reports of a comb being rubbed with a thumb causing a cat to gag. The sound it makes seems to trigger this response because of how it sounds to them.

To us, this may seem bizarre. But, now we know some of these sonic triggers it can help you to avoid doing this. The good thing is knowledge is power so rather than looking at your cat thinking it’s overreacting you can appreciate its reaction.

Should your cat gagging be a cause for alarm?

If your cat is gagging regularly, especially if they are vomiting as well is a cause for alarm. According to this site, cats should not be doing this more than once any week. If they are, they should be checked out by your vet to make sure.