Why Does My Cat Bite and Kick Her Kittens? (Insane?)

Why does my cat bite and kick her kittens?

Your cat could be biting and kicking her kittens for several reasons. Some of the most common reasons are a method of rough discipline, showing them who is in charge, establishing territory, or part of her training process. In most cases, the mother cat means well, but it may look aggressive.

So, now you know. But, is it normal for a mother cat to attack its kittens? Do momma cats remember their kittens after they leave? Is there any reason why the queen cat might be acting overly aggressive towards them? Keep reading for these answers, and much more…

Why does my cat bite her kittens? 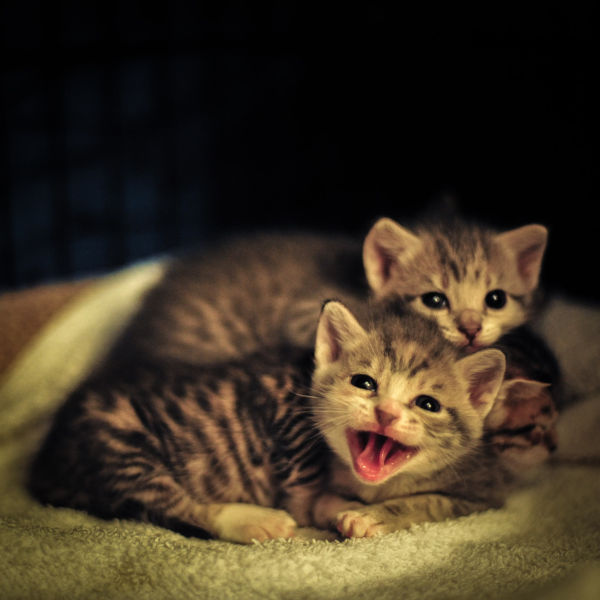 A cat may appear to bite her kittens for several reasons. One of the most common reasons is she is using her teeth to move the kittens. They are known to grab the kitten’s scruff with their teeth to move it from point A to B. However, there may be other occasions when it is disciplining them, but getting too rough.

It can be difficult to decipher if the cats are in pain or just meowing because young kittens often cry for most of their waking hours. This is even more so when they are young kittens and rely on their mother for most things.

Is it normal for a mother cat to attack her kittens?

A cat may seem to attack its kittens because of a few reasons. One of the common reasons is their age and the expectation for them to become self-sufficient. This means, that once they hit a certain age the cat will typically get short with the kittens and expect them to look after themselves.

To us humans, this may seem weird (weirder than glitching? click here), or cure behavior, and by our standards it is. However, in the cat world, they view things differently. So, if you have witnessed this happening try not to be too shocked now that you have an idea why it may be happening.

Why is my cat being aggressive to her kittens?

a cat may become aggressive towards her kittens if she feels threatened herself. When this happens she may abandon them to spare herself. Examples of this could be another animal or cat threatening it or a loud unexplainable sound that scares here.

There could be other reasons, but this is an example of how this could happen. So, if this happens, you have an idea why this can happen. In the next section, I will explain how you can stop your cat from biting the kitten if this is also happening.

How do I get my cat to stop biting my kitten? 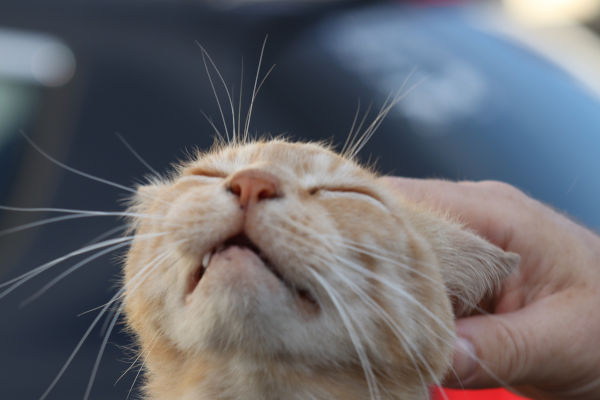 An angry-looking cat getting petted.

To get a cat to stop biting her kittens you will need to train her. Warning, this is not an overnight process, so some patience is required. Here are some steps:

When your cat is behaving as you wish, for example, not biting, or being calm and well-behaved, reward it. This can be as simple as offering it some tasty cat treats (Click here to see the reviews, on Amazon #Ad), or one of its other favorite choices.

As much as this may seem counter-productive, cats are known to react to positive, instead of negative reinforcement better. So, this is a faster way to get the results you wish for.

02. Use body language for offenses

If it persists in biting you, it is likely to do this to your kitten. So, when it happens, you need to pull away from it to make it clear this is not allowed. You may also need to make a small noise to put some emphasis on your objections. This will make your point hit home better.

Stick with this for a while and monitor how your cat reacts. If it is not improving you will need to stick with it and repeat the steps.

Will a mother cat abandon her kittens if you touch them?

A mother cat is unlikely to abandon her kittens if you touch them. This may have been a myth that has been reported and passed on. If there is a concern of abandonment there will be other signs to look out for such as a long absence.

Alternatively, if the kittens seem to be in obvious problems, such as looking distressed, then they may need to be relocated. But, you may need some professional advice to clarify this. This is because some cat owners panic and move the kittens, only to find out later this was too earlier. Resulting in antagonizing the mother cat.

Do cats get sad when you give their kittens away?

Cats do get a bit sad when their kittens are given away. But, not in the same way as us humans. For example, you may see them looking for their kittens around the house for days after and looking lost without them. As for the kittens, they may also show some signs of unhappiness or lack of appetite.

If you see your cat looking this way you will need to be extra patient with them to make sure that they get over it as soon as possible and feel your love. But, in reality, it won’t take them long, they are not like humans in this way.

Do momma cats remember their kittens?

Momma cats are unlikely to remember their kittens. This is because their memory worked differently than we humans. Cats heavily rely on their scent rather than visual memories. But, after a short period, they are likely to forget the scent.

This is why sometimes you see a cat and kittens reunited years after and they respond like strangers. It is weird to us humans who would act the complete opposite, but this is the way cats are and it is unlikely to change.

Do cats get jealous of their kittens?

Cats can get jealous of their kitten if they feel that they are getting overlooked by them. This means, that if their beloved owner is now spending more time with the kitten, it could feel jealous. Also, it follows a strict cat hierarchy, and in its world, it should be the boss and expects the kitten to fall in line.

So, if your cat is acting weird, then you will have an idea that it could be related to the fact that it is feeling jealous of your kitten. This jealousy can also be extended to other animals, new babies, or even a new cat.

How long can a mother cat be away from her newborn kittens?

It is normal for a mother cat to leave her kittens for 4-6 hours unattended. Anything more could be a concern. But it can be a bit more, or slightly less depending on the cat, location, and circumstances. So, you will need to gauge it based on your specific situation.

Maternal aggression can be a bit trying for cat owners, but don’t worry. Typically, this is going to last for 3 to 4 weeks, and by then the Queen (mother cat) should calm down and be much less vigilant about the handling of her kittens.

During this time, it’s best to simply give mom space and as much peace as you can. Aside from changing out her litter box and providing fresh food and water, you should try to simply keep your distance. Once mom feels that she and her kittens are safe then she will slowly start relaxing her attitude.

Why does my mother cat hate her kittens?

Mom is usually going to let her kittens stick around until they are 12 to 14 weeks of age, at which point she will feel that they are ready to be on their own and she’s going to push them away. This is typical cat behavior.

While it’s sad to watch, there’s some good sense behind it, as the young cats will eventually chase HER away once they are strong enough and force their dear, old mom to find new territory.

If the kittens are younger than 12 to 14 weeks, however, then you should bring the rejected kitten in to see the vet – something may be wrong with their health.

What causes a cat to bite?

Cats will bite for different reasons. They often bite for play, for instance, without breaking the skin, or they might bite as a way to say ‘leave me alone’, with this particular bite often being accompanied by swift, repeated kicks while they hold you still with their clenched teeth.

Among other cats, a quick bite that doesn’t break the skin is a way for the cat to get the other kitty’s attention. It doesn’t hurt the other cat, but it does what it’s supposed to – it get’s their attention and lets them know that something they are doing is ‘wrong’, according to the other cat.

Cats will also bite aggressively, but their body language will be different, with their bodies tensed, ears laid back, and their tail often swishing back and forth, quickly and sharply.

What should you do when your cat bites & kicks?

When your cat bites, hold you in place, and begins their ‘kicking routine’ then they are telling you that they are annoyed and instead of scolding them, you need to move away from a small distance. Calmly say ‘no’, to assert that this behavior is unacceptable, and refuse to play or otherwise interact with them until they calm down.

Cats can get a little ‘worked up’ when they are annoyed and shouting isn’t going to help. Also, refrain from pointing your finger at the cat too closely – you’ll likely just get a finger nip for your troubles – but rather just wait until they calm before you interact with them again.

Over time they will learn that these little temper tantrums are not going to get them their way and your kitty will adjust their behavior accordingly.

Why do cats bite & kick with their back legs?

When your cat bites and kicks with their back legs, they are practicing a technique that has served cats well since the dawn of time. When you’ve captured prey, they don’t always go down so easily, so holding them in place with paws and clenched teeth allow a cat to rake their back claws across the prey’s exposed belly.

When your cat does this to you, they are either practicing this technique as a form of play with you, or they are simply annoyed and would like a little space. As they learn this little trick as kittens, it’s one of their ‘go-to’ modes of expression when they are feeling ultra-playful or simply annoyed.

Is it normal for a cat to bite and kick you?

It is normal, but if it breaks the skin, then your cat hasn’t learned to control their teeth or their claws very effectively yet. Stop contact immediately if the bite or scratch breaks the skin and hold up the scratched or bitten area and say ‘oww’. Refuse to play with your cat for the next few minutes.

It may take a few tries, but your cat will get the message, and slowly learn a little more control. As a bonus,  by refusing to continue playing when your cat ‘bunny kicks’ you, then you are also discouraging this behavior altogether and you should start seeing less of it over time.