Why Is The Gyra Cat Deadly? (Could It Kill You?)

Why is the Gyra cat deadly?

The cat, called Gyra, named by the BBC, is known to be deadly because of its volume of kills per night. For example, it is known to kill more of its prey in one night than a bigger cat, like a Leopard, would kill in months. Therefore, for its size, it is known as one of the deadliest cats.

So, now you know. But, what exactly is the species of this cat called Gyra? could it kill you? How big are these cats? Keep reading for these answers, and so much more…

What is the Gyra Cat?

The cat, known as “Gyra”, is actually a black-footed cat that is located in Africa. This cat was followed by the BBC for an interesting look into the behavior of this species of cat. Not many people knew about this cat before this and the astonishing thing is its small size and cute demeanor.

Often when you imagine a deadly cat from Africa you may think of a leopard or another big cat. But, Gyra, is an anomaly in this sense because of its deadly nature, packed into a small body.

Other deadly cats in their natural environment are substantially bigger than them and are also known to be successful hunters. This is why they are so interesting.

Where are the black-footed cats from?

The black-footed cat is located in Africa. In particular, South Africa, Botswana, or Namibia. And, it may be hard to find one even if you were brave enough to try and find one in these countries because they are quite rare.

However, The BBC show shone a light on them which is good because it may help them to get some assistance to help them survive longer, as a species.

One could also argue that more attention could make bad people try and fin them, and this is an interesting point. But, hopefully, more good than bad will come from it.

Can a black-footed cat kill you?

A black-footed cat is unlikely to kill you because you are a lot larger. And, the chances are they will fear you. But, considering they have an elite hunting style, known for killing their prey 6 of 10 attempts, then some caution is needed, and it’s not worth trying your luck.

They are known to go after small animals like rats, mice, or even small insects so humans are not their target. But, with that being said, they are still dangerous and worth avoiding if you had a chance to come in contact with them.

If we use other small animals as an example of why caution is always best. You have heard of a Staffordshire bull terrier, right? or “Staffy”, as some people nickname them as, well, they are small, right?

Well, my point is, unfortunately, some people may underestimate them because of their size. It is better to be safer rather than sorry, in my opinion.

Black-footed cats are categorized as “vulnerable”, according to ISEC. So, technically they are not endangered. But, this classification is still a concern. Meaning they are rare and not plentiful.

So, if you have ever wondered about the status of these cats since hearing about them, or watching the documentary, now you know.

How big is the Gyra cat?

Black-footed cats, like Gyra, are no bigger than 10 inches tall. But, to put that into context, in comparison to the average cat they would be seen as smaller. So, they are quite a small cat that has amazing skill and vicious hunting skills.

If you assumed these cats were big and ferocious, you got half of it right. Well, they are ferocious, but they are not big, especially when they are compared to the big cats in their Native land of Africa or even your average domesticated cat.

It’s weird to think that a domestic cat, bigger than these black-footed cats, could not compete when it comes to hunting. But, these are the facts.

Can you get black-footed cats in North America?

You can find black-footed cats in North America, however, this will be in a zoo. For example, the San Diego zoo is located in California. But, you are unlikely to see one roaming free in North America otherwise.

These cats are native to Africa, as discussed earlier. And, they are classed as vulnerable, meaning there are not a lot of them in existence. So, if you were hoping to bump into one, or feared this, it’s unlikely to be the case.

Are the black-footed cats the smallest wild cat?

The Black-footed cat is known to be the smallest wild cat in Africa. They are typically no bigger than 10 inches in height but pack a powerful hunting body for their size.

The interesting fact about these cats is you may assume for them to have obvious black-colored feet, right? Well, if you saw one wild in Africa or the San Diego zoo, you would be surprised. Why? Well, only their paws are black.

The rest of their body is the complete opposite. Meaning, they are stripy and fit well into their native surrounding. so, they are well camouflaged. To the passer-by, they would look no different to an average domestic cat that has no special hunting skill.

Is the Gyra cat domesticated? 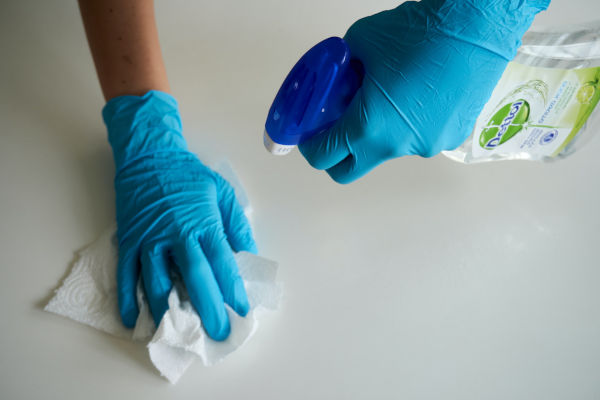 Cleaning a surface with rubber gloves and spray cleaner.

The cat called Gyra, and other wild black-footed cats, are not domesticated at all. They are the complete opposite. These are seasoned wild hunters that spend most of their days hunting to survive. And, they seem to do that well.

You are unlikely to see a black-footed cat tucking into some cat treats (Click here to see the reviews, on Amazon #Ad) anytime soon. The reality is they would probably reject such a treat because they would not identify anything that has not been freshly killed as an acceptable food.

Does the Gyra Cat look cute?

The cat called Gyra does look cute. If you see this Gyra cat, and any other black-footed cat for that matter, you will also agree. But, could this be one of their biggest tricks? Maybe this is why they are so successful with their hunting.

Meaning, if their prey sees them coming maybe they are caught off guard by their cute demeanor. Or is it their advanced hunting skills? Who knows. But, either way, they are cute for sure.

A black-footed cat would attack and kill a gerbil. These are one example of their known prey, along with other rodents, birds, and insects. In this respect, they are quite similar to domestic cats for these choices.

But, the big difference is they are willing to do this over and over again each day to survive and they actually need these kills to feed themselves. unlike a domestic cat, fed by us humans, that hunts animals, like mice, for fun or instinct.