Why is my cat ejaculating?

Regarding the latter, this is why you may see your cat ejaculating and this may concern you. It is embarrassing for some people so it is understandable, but it is a natural behavior.

Cats, in this way, are not much different from human teenaged behavior. However, the biggest difference is their lack of shame, because this could be done in your presence. 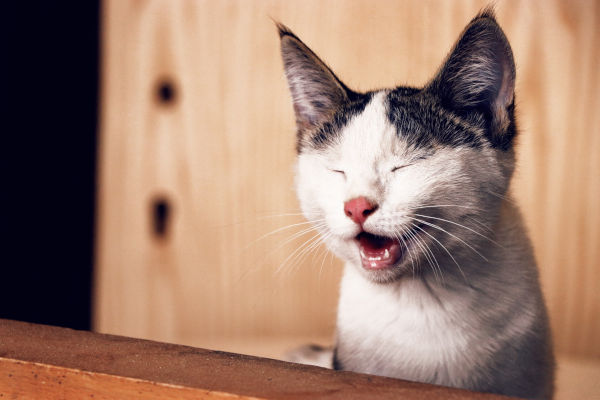 A cat with its eyes closed, and mouth open.

Although, normally, some cat owners would prefer if they can control it in some way, there are ways to reduce the chances of it happening, but no way to stop it completely. This is because this is how nature intended it.

Can you stop your cat from ejaculating like this?

Some cat owners reduce the chances of their cats ejaculating like this by neutering them. Once this happens they are likely to lose the desire and gradually stop doing it. It is still possible for them to do this after they have been neutered, contrary to what you may have heard.

The reality is, that this is a natural behavior that cannot be stopped completely. The cat feels pleasure and desires it because nature intended it this way. But, you can try to reduce it at best. And, even if you do it is not a sure-fire solution, but it’s likely to help.

Why does my cat get boners?

A male cat will get “a boner”, scientifically known as an erection when they are sexually aroused and a necessary prerequisite to mating. However, they are known to have random boners, as humans do. This is normal.

Also, if there are neutered they can still get boners. This is usually because the male cat has recently been neutered and may still have some higher levels of testosterone present.

These boners just prove that your cat can happily reproduce. And, from a natural perspective, this is good news. Maybe not for you if you find it hard to look at (excuse the pun), but this is the way nature intended it.

Can neutered cats get boners?

Neutered cats can still get boners (erections). This is mainly for those cats that may have recently been neutered. And, when I say recently, I mean like within weeks, that recent. When this happens they may still get boners while their body adjusts and their testosterone levels drop.

You may see your cat with a boner after it has been neutered and be shocked wondering why this is happening. And, you may have assumed this is impossible, based on what you have heard. But, now you know how this can happen.

Can cats be sexually attracted to humans? 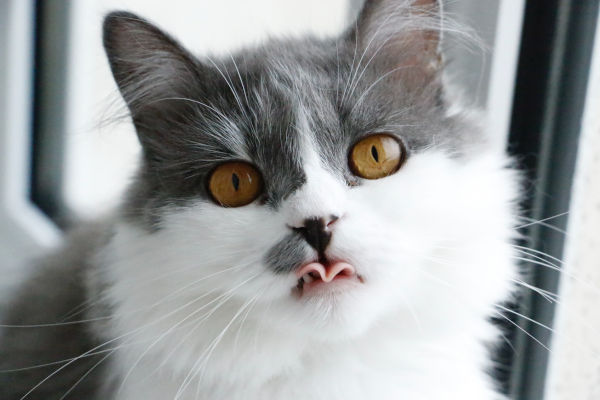 A cat with its tongue out looking thoughtful.

Cats are not known to be sexually attracted to humans. But, the odor created during human sexual intercourse can attract them. Meaning the actual smell the human body emits during sex can gain their attention. This may be why you may assume they could be attracted.

Daily, cats try to smell out natural body odor because this is how they detect loved ones and navigate. But, humans have a habit of covering their natural odor with scented creams, fragranced shampoos, or expensive perfumes.

For whatever reason, humans feel compelled to cover themselves in artificial smells to fit in with society. which is completely different from the world of cats.

This can confuse the cat’s scent. Hence the reason they may appreciate the raw odor during and straight after sexual intercourse.

Why is my male cat licking his private area so much?

If your male cat is licking its private area so much it may have a health issue such as a urinary tract infection (UTI), or some potential obstruction causing it pain. This continuous licking could be its way of relieving the pain from one of these issues.

If in doubt it’s worth consulting your vet because, like most things, the earlier you get onto it the better chance you have of helping your cat with the least problems caused. Hopefully, your cat is fine, but at least you will have that peace of mind.

Why does my male cat hump me?

Your male cat may hump you (click here to see if they will do it to other objects) for several reasons. This can be from frustration, enjoying the pleasure from it, or craving some attention from you. It is quite common for neutered male cats.

The reason why neutered male cats are more likely to do this is that they are still usually active and have high testosterone. After being neutered you should notice a behavior change including them potentially stopping this humping.

This is one of the reasons why cat owners choose to neuter their cats to stop things like this from happening, as well as issues like spraying, etc.

Will a cat still try to mate after being neutered?

A cat may attempt to mate after being neutered. This is common amongst cats that have recently been neutered because their bodies are still adjusting to the hormonal changes. And, during this time you could see them attempting this.

The neutering surgery effectively removes the cat’s reproduction organs meaning they typically lose their drive for mating. But, it can take some time, potentially weeks, to fully calm down.

So, if you witnessed your cat doing this before you read this article, you may have been confused and even felt like the surgery was a waste of time. But, now you know.

Should you discipline your cat for ejaculating?

You should not discipline your cat for ejaculating. Firstly, it is cruel and lastly, it is not usually effective. This means, that cats often get confused about why they are being disciplined and assume you are being mean for no reason.

Long term this could lead to. a breakdown in your relationship with your cat and make it trust you less.

Will a neutered male cat be less likely to ejaculate?

Yes, if your cat is neutered, then they are much less likely to ejaculate, however, it is still possible for them to produce some fluids after this procedure. The ejaculate will have no sperm and as neutering is just the official term for castration, your cat loses their ability to produce testosterone once they are neutered.

This means that ‘humping’ behaviors may still be present in the beginning when your cat still has a bit of testosterone, though as time progresses and they do not produce more, their behavior will calm and the humping behaviors will lessen or even go away altogether.

Do neutered cats get erections?

It is still possible, yes, though it’s going to occur less frequently and it’s less likely to occur since your cat can no longer produce their testosterone.

While some cats will still indeed become aroused from time to time, it will be at a severely reduced frequency and they’ll be less likely to engage in ‘humping’ behaviors or harassing any female cats that might also live in the house. Simply put, they’ll still be attracted to the other cats, but less likely to do anything about it.

Could my cat be attracted to me?

Your cat loves you – just not in that way. Cats are very scent oriented, so if you have recently had a little ‘quality time with your mate, then your cat might smell this and they might derive some arousal from these scents and all of those pheromones flying about the house.

Humans smell weird to cats, as they can smell our natural odors, intermixed with all of the artificial scents that we put on ourselves. Things get even more confusing when humans wear cologne or perfumes.

One good example is Calvin Klein’s Obsession for men. In an experiment, researchers at the Bronx Zoo tested the effects of various perfumes and colognes on the captive tigers at the Zoo. While some perfumes would only get the big cat’s attention for 15 to 20 seconds, with Obsession it lasted 10-11 minutes!

This was found to be a result of the addition of Civetone to the perfume, as Civetone originally contained African Civet pheromones and the cats noticed this right away. While modern Civetone is made with palm extract, this serves as a great example of cats, scents, and how they might respond.

Why do male cats lick their privates?

Cats do this as a normal part of their grooming, though they will also do it for fun, or even as a response to pain or some sort of obstruction that is preventing normal urination. If this behavior is fairly new for your cat, it might be a good idea to schedule a vet checkup just to rule out any health issues.

Should I punish my cat for ejaculating?

No, you definitely should not punish your cat for this. It is natural behavior, especially if your cat is not neutered, and by the time you get to punish them your cat will have no idea what you’re so mad about.

This can erode their trust in you, so it’s best to just overlook the behavior and if your cat is not neutered then you might want to consider getting this done. Most of the time this will calm their behavior so that occurrences of this sort of thing are minimized or might even become non-existent.