​​Why Is My Cat Afraid Of Apples?

If your cat is afraid of apples this may alarm, or confuse you. Which will inevitably lead you to wonder why this is happening…

​​Why Is My Cat Afraid Of Apples?

With apples we are uncertain what the association might be. They do have a very distinctive shape to them, however, and it is likely that this shape resembles the head of a predator that the cat has seen before and prefers to keep a distance from.

So, now you know. But, are all cats scared of apples? How can I prevent them from getting scared? Can cats eat these apples? Keep reading for these answers, and much more….

Contents show
1 ​​Why Is My Cat Afraid Of Apples?
2 Are all cats scared of apples?
3 How can I prevent my cat from being freaked out by apples?
4 Can cats eat an apple?
5 Will apples hurt cats?
6 Is it normal for cats to like apples?
7 Can I feed stray cats with apples?
8 Are cats scared of other fruits or vegetables?
9 Can cats eat any fruits?
10 What other things can scare cats?
11 Can cats eat applesauce?

Are all cats scared of apples? 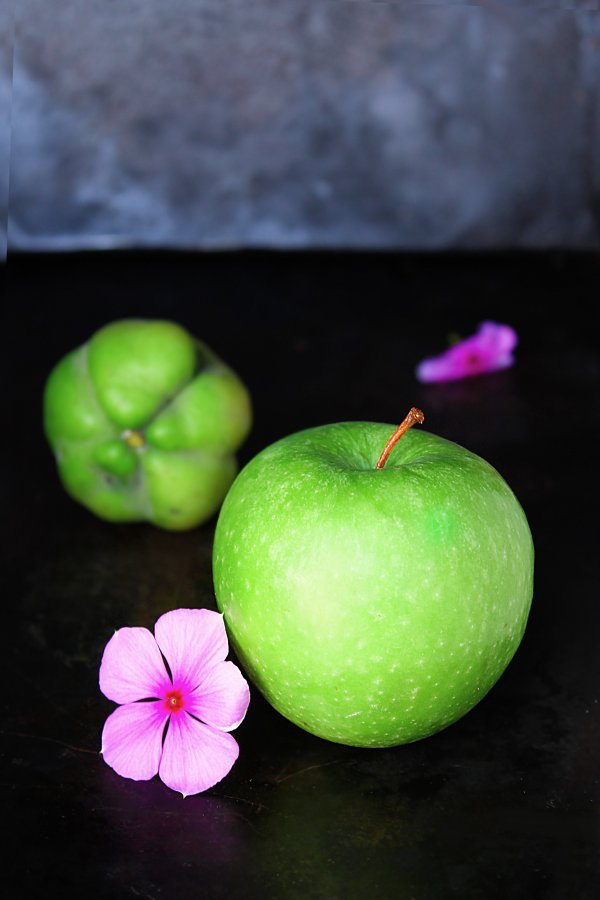 A green apple and a pink flower.

No, not all cats are afraid of apples. If you set an apple on a table, some cats might look at it warily and others might run away. Certain cats will look at you curiously and hold your eyes while they stroll up to the apple and casually knock it off of the table, essentially daring you to do something about it!

It all depends on the individual cat and their personal experiences, but likely if the apple doesn’t remind them of something scary, they’ll simply view it as an ‘ugly grayish ball’ — as cats are believed to be mostly red and green color blind!

How can I prevent my cat from being freaked out by apples?

If you’ve got apples in a fruit bowl, for instance, then your cat will see them from time to time in a non-threatening way.

If you eat apples around your cat but you tempt them close with treats, then your cat can eat their treats and see that nothing happens when apples are nearby. If your cat is a rescue, consider also that some unsavory person might have thrown apples at the cat, and in a case like that it’s also going to be a matter of time.

Once your cat knows that you aren’t going to chuck apples at them or that apples nearby also mean tasty treats for them, then they may relax themselves a little and eventually lose their fear of these fruits.

Can cats eat an apple?

Yes. In small amounts, cats can and do occasionally eat certain fruits, even though they are technically carnivores. Examples include apples, seedless watermelon, bananas, and even blueberries.

Cats eat weird things sometimes and it’s all part of their character, just be sure to moderate the amounts and with apples be especially careful of the seeds.

Apple seeds contain trace amounts of cyanide poison, so if your cat wants apple then you must be sure to simply chop them a little and to safely discard the seeds and core.

The stems and seeds of apples should be considered toxic, but the actual flesh of the fruit is considered a safe and healthy treat for cats that have developed a taste for it. Apples have vitamins that are good for your kitty, but moderation needs to be observed so that your cat doesn’t get indigestion, diarrhea, or other stomach and bowel discomforts.

As a general rule, keep it down to 10% of their caloric intake. A 10 pound cat could probably eat the equivalent of ¼ chopped, small apple or a single tablespoon of apple puree with no ill effects, but if you aren’t sure then just cube a few small pieces and eat the rest of the apple yourself.

As a bonus, if anyone asks about your day, you can say that you spent part of it happily eating apples with your kitty!

Cats sometimes like weird tastes, but you should know that if your cat likes to eat apples, it is not because the apple is sweet. This is because your cat is a carnivore and as such, the taste receptors on their tongues are actually quite different from ours.

They don’t notice when something is sweet.

That said, they do have the ability to taste smells with their mouths, due to their Jacobsen’s organ. Snakes have a Jacobsen’s organ too and this is why they constantly flick their tongues out. ‘Tasting’ the air tells them what animals are nearby and information about the area.

Conceivably, the appeal of the apple might just be the strange-tasting scent, but most cats won’t care for apples. So, if your own cat likes them, then it’s just their own personality and tastes.

Can I feed stray cats with apples?

This is not recommended. While some cats like fruits, they are still carnivores, and as such they need meat to get the necessary vitamins and nutrients which they need to stay healthy. If you’d like to feed the local strays, you can get some generic dry cat food and this will give the strays some much-needed nutrients so that they can survive on their own.

While they might eat fruits and veggies if you put them out, this is likely going to be because they are very hungry and malnourished, rather than a genuine enjoyment of the vegetables and fruit. Stick with foods such as meats and canned or dried cat foods and in this way you will genuinely be helping these strays.

Are cats scared of other fruits or vegetables? 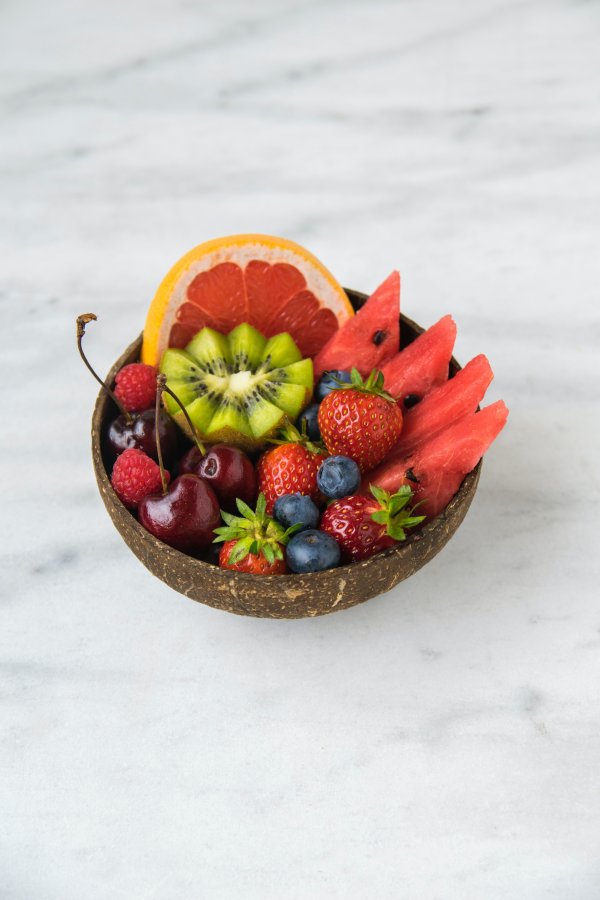 A bowl of assorted fruits.

Fear of fruits and veggies is not uncommon with cats, though it’s not like the fear of a human child that they will have to eat something healthy. Bananas and cucumbers, for instance, sometimes give a kitty a start because they look a little like snakes. Also, spiky pineapples certainly look imposing when you don’t know what they are.

Can cats eat any fruits?

Certain fruits are definitely bad for cats. Citrus fruits, for instance, can give cats an upset stomach or diarrhea. Other fruits are even quite toxic, such as cherries, grapes, and raisins.

All parts of cherries – the flesh, the seeds, and the stems – are very toxic to kitties, to the point that ‘cherry poisoning’ is a common term with veterinarians.

Grapes and raisins are hard on a cat’s kidneys, so these should not be allowed either. When in doubt, be sure to check online or even better – ask your vet which fruits and vegetables and which quantities should be allowed.

It’s okay to diversify your cat’s diet. Just like humans, they like a little variety from time to time, just be sure to do a little homework as certain fruits and vegetables will definitely be off limits.

What other things can scare cats?

Cats are amazing predators, but they didn’t get at the top of the food chain by sneaking up on everything they see. When something is new to your cat, they will always approach it with caution. With things that look like predators, this is especially so.

Cucumbers and pickles can look like snakes, so these will commonly startle a cat at least once if they’ve ever seen a snake. Most cats are frightened of water, as they’ve learned early on that it makes them wet, cold, and interferes with the normal scents of their body and around them.

Cats are geared to survive. A sleeping cat can instantly spring up and back away from a perceived threat, no matter how deeply they are sleeping. Assume that your cat treats anything new and unfamiliar with caution and don’t ‘prank’ your cat in a manner designed to frighten them.

They can get stressed and even develop phobias so just try to see things from the cat’s point of view. If it’s new, it might be dangerous, so if you are showing them something then provide reassurance and don’t just ‘spring it on them’ and everything should be okay.

Sugar-free applesauce is okay in small amounts and you want to go with all-natural if possible. The addition of cinnamon is okay, but otherwise it should basically be made from apples and water. ‘Regular’ Applesauce has a lot of sugar in it, so this is a diabetes risk for your cat, and that’s why it’s important to seek out the all-natural kind.

As far as amounts, a 10-pound cat can have about 1 tablespoon a day, though if your cat shows signs of stomach discomfort or constipation, try switching to once every 3 days and your cat should be able to have a little applesauce with no ill effects.