Why Is My Kitten Obsessed With My Older Cat? (Love?)

If you have a cat and a kitten, and you have noticed that the kitten is keen on the cat, then you may wonder why and if you should do something about it…

Why is my kitten obsessed with my older cat?

This is completely natural. Your kitten is bonding with the older cat and taking advantage of having another member of their species whom they might learn from. Expect to see this new friendship displayed quite a lot.

It’s not uncommon for kittens to follow their new best friend/mentor around and don’t be surprised if they pick up a few of the older cat’s habits that you aren’t necessarily very fond of. Your kitten is learning lessons at this time that they’ll likely carry with them for the rest of their lives.

Should I be worried if my kitten is too keen on my cat? 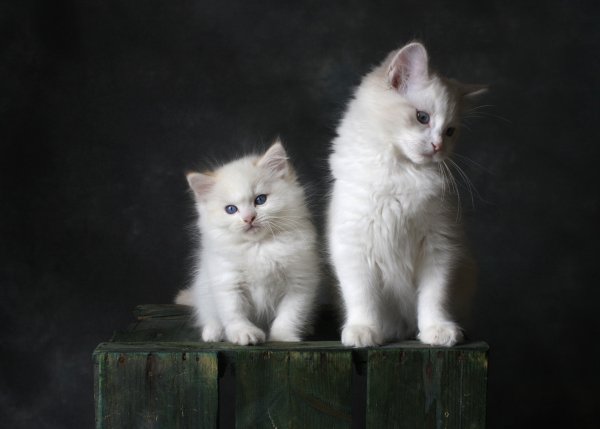 A cat and a kitten, both white, side by side.

No, you shouldn’t be worried. After all, your kitten is not going to love you any less, they are just young right now and in need of a mentor that can be there for them 24/7.

If the kitten starts annoying the older cat, then the elder will make their displeasure known, but this is also just part of the process.

Sometimes the older cat may hiss or even give a quick, sharp nip to the kitten, but as long as it’s not breaking the skin then you won’t need to worry – this is just normal cat communication. It looks a little scary but it’s just quick and to the point. In most cases, you might not even see this behavior!

How can I prevent my kitten from annoying my older cat?

The best thing that you can do is to isolate some spots in the house so that your adult cat can get in, but the kitten will have a much harder time following them. Baby gates are good for this, as kittens have a harder time trying to spring over them.

You can also place your kitty’s food and water on a high counter, placed so that it won’t be easily knocked off, and set the kitten a food and water bowl out which is all its own.

Just keep an eye out to make sure that the adult doesn’t get into it, as some kitties are gluttons when they think they can get away with it!

Do kittens and cats usually get along?

Usually, yes, but not always. It depends on the individual felines. In most cases, the older cat may be a little rough with the kitten at first, but the intent is not to hurt them, just to show them who is the boss of the house.

You might not even see this, however, as many cats will take to the kitten from the start, grooming them and playing with them, and the two will quickly become the best of friends. If your cat seems to dislike the new kitten, you should make sure to supervise them carefully and only allow meetings when you can be there.

That way they can interact as often or as little as you allow and slowly get adjusted to each other over time. Just keep in mind that there is no guarantee that they’ll be friends – but in time in a worst-case scenario, they should at least become tolerant of each other.

Why does my kitten chase my older cat?

Kittens have high energy levels and they are still learning to use all of the tools that Nature has equipped them with. For instance, retracting their claws is something that they need to learn, as it’s not an ‘automatic’ function.

Their high levels of energy need to be applied somewhere and if there is another cat in the house that will allow it, then this is the most natural place for it to go. This behavior is called ‘socializing’ and it’s very important for the kitten.

During this time, they learn how to retract their claws and how hard they can bite, as well as the lesson of getting along with people and animals in general. The chasing and constant playing are normal, after all, right now your kitten is a furry little kid!

Why is my kitten terrorizing my older cat?

This behavior is typically just the product of curiosity and even a little fear of the older cat. Cats often attack things that they are afraid of as a way to drive off other potential predators in the wild and even as kittens, they’ve got the courage and instinctual drive to do this.

More often, however, the kitten just wants to play, and their high levels of energy end up being directed in the best place possible for them – your older cat.

This may be received in different ways, with some older cats frightening off the kitten with a quick nip and a swat of their paw, while other cats might simply take away the temptation by hopping up on the windowsill where the kitten can’t reach them in the first place!

What is normal play between a cat and a kitten? 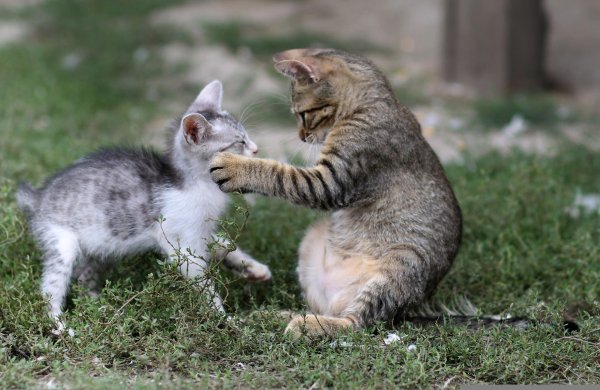 An adult tabby cat is playing with a grey kitten.

Stalking, pouncing, and hiding to surprise each other is just normal cat and kitten every day play. Sometimes it can even turn into a real tussle, with the two rolling around and biting at each other, but as long as the older cat is not harming the kitten then this is completely normal.

After all, your kitten has to learn how to be an adult cat, and a big part of that is learning to be a proper hunter. The older cat teaches them how to stalk, hide, and fight, and without a chalkboard or textbooks, that’s naturally going to be done using examples of these useful skills.

Can I Leave My kitten Alone with my cat?

No, you shouldn’t leave them alone until you are certain that they are the best of friends. During the first few days, the cat and kitten will be adjusting to each other, and you should have a good idea by the first day or two of how that is going to go.

Some owners even prefer to always err on the side of caution and they won’t leave their cat alone with a kitten until they’ve known each other for at least a few weeks.

While it’s ultimately up to you, this is a pretty good strategy to consider just to make sure that the older cat isn’t jealous or annoyed by the new kitten.

How do you tell if your cats are playing or fighting?

It’s all about the body language and the types of bites involved in rough interactions. If not skin is being broken, for instance, then it is likely just a matter of establishing dominance rather than trying to hurt each other.

Watch for the body language and listen to the sounds that your cat is making. If you see a tail tucked between one cat’s legs, along with their ears pointing back, then this is genuine aggression and someone is likely to get hurt.

Sound-wise, listen for screechy-sounding meows which are typically drawn out and quite unpleasantly in their rising and falling tones. Usually growling will be involved as well. If you see these kinda behaviors, then you will need to separate the cats and reintroduce them slowly.

To do so, use a kitty crate so that the new cat is safely behind the bars and they can get used to each other’s scents in small doses.

Slowly increase their time together until you feel like you can open the crate and after that, just make sure that all time together is supervised until you can tell that they are getting along.

How do you know when cats are bonded?

When 2 cats bond, it will be very visible in their body language. They’ll walk around together, play together (sometimes even roughly), and you should also see them grooming each other from time to time. They might even take naps together (though not always, as cats are very solitary by nature).

If they are wrestling around too much for your liking, don’t separate them – just check to make sure that none of the bites are breaking the skin and that you don’t see any bloody scratches.

Cats that are at play will bite just hard enough to get attention and will retract their claws so that fighting is essentially ‘slapping each other around’ and thus much less scary than it looks.