Why Does My Dying Cat Want To Go Outside? (Peace?)

Why does my dying cat want to go outside?

Many cats, when they are in the process of dying, want to go outside because they want to find a comfortable place away from their human. Cat owners who allow their cats to go outside may find problems with this, as it becomes difficult to find and locate them later.

So, now you know. But, how do dying cats usually act? Do cats stop purring when they are dying? What do you do with a dead cat? Keep reading for these answers, and much more…

Contents show
1 Why does my dying cat want to go outside?
2 How do cats act when they are dying?
3 Is it cruel to let a cat die naturally?
4 How do you know if a cat is suffering?
4.1 01. Body Language Signs
4.2 02. Facial Expressions
4.3 03. Other Indicators
4.4 Detecting Suffering
5 What happens when a cat dies at home?
6 Can I put my cat to sleep at home?
7 Do cats stop purring when they are dying?
8 Where would a cat go to die?
9 What do you do with a dead cat?
10 Do cats know when another cat has died?

How do cats act when they are dying?

When cats are dying, their behavior can vary to great degrees. Some will start hiding, others will eat and drink less and others will have a noticeable change in temperament. Almost all dying cats will have a change in their appearance, especially ones who are elderly, with dull or matted fur.

This can accompany glazed or dilated eyes with a sunken look. They can have respiratory difficulties and seizures too.

Is it cruel to let a cat die naturally?

Letting a cat die naturally can be cruel depending on the situation. If you know the poor thing is in excruciating pain, has completely stopped eating, or can’t physically get itself to the litter box, then you are bordering on cruelty.

If the cat has a preexisting condition that can no longer sustain treatment, management, or have a cure, you may have to consider euthanizing it.

But, if the cat is aging and isn’t showing any signs of immediate anguish, injury or difficulty, then letting your cat live out its days isn’t cruel.

How do you know if a cat is suffering?

When a cat suffers, it will exhibit certain signs of such things. They’ll display specific body language, facial expressions, and other behaviors that run outside their normal range of being. 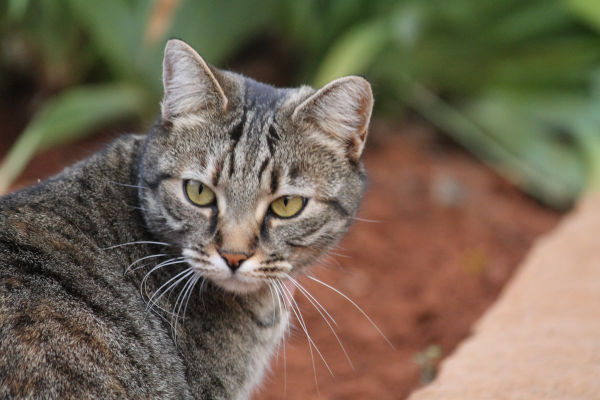 A cat outside looking sad.

So, it’s your obligation to pay attention to every tiny detail, trait, nuance, and mannerism of your cat so you can understand when things go awry with its health. In other words, you should have some inkling of your cat suffering without them necessarily having to indicate it.

That said, it’s not always easy to detect because cats can hide chronic illness and pain very well. It’s much easier to identify it in younger cats with temporary suffering, like a cut on their paw. In either case, untended pain and suffering can impact a cat’s emotional and psychological well-being in profound ways.

What happens when a cat dies at home?

When a cat dies at home, it can come as a great shock that wells us up with a myriad of emotions including distress and tears. So, before determining the cat is dead, check to see that the cat isn’t experiencing some kind of severe injury or health condition.

Inspect the cat’s chest and stomach to see if it’s rising and falling and whether the body is warm or not. See if the cat responds to noise or touch. Also, lift the eyelids and look at the pupils, which will appear much larger if they have passed on. If the pupils change sizes upon opening the lids, then the cat isn’t dead.

Another indicator of a dead cat is the presence of fecal matter and urine in the immediate area. But, this also means the cat has been there for quite some time.

Can I put my cat to sleep at home?

Yes, you can put your cat to sleep at home if that’s what will be best for you and the cat. Several options are opening up in this arena under the banner of “pet hospice.” There are mobile vets in some major cities that provide all the care your pet needs without having to risk transporting the cat if that’s a concern.

These also offer a stress-free way to euthanize your cat at home where they can be calm and peaceful.  But, you may have to pay quite a bit of money to do this. An in-home consultation can cost somewhere between $150 and $200 or more. For euthanizing services, expect the price to be no less than $400 and up to $1000 or more.

So, it’s best if you plan your cat’s end-of-life care and how you want to handle it long before they pass. This way you won’t make rash and regretful decisions.

Do cats stop purring when they are dying?

Whether cats stop purring when dying or not depends upon the cat. Some cats will stop purring long before they leave this world and others will purr to the bitter end, albeit not as loud or strong as they once did.

Where would a cat go to die?

Many other cats will find a cool, shaded area like under vehicles or bushes. They’ll even go into nooks beside the house or between thick grasses. Indoor cats also seek out these kinds of resting areas but these include under the bed, storage rooms, attics, or cellars.

In either situation, they may not come home to eat or drink water even if they are still alive. If you know they haven’t been well lately and disappear for longer than is normal, it may have already gone into the great unknown.

What do you do with a dead cat?

When you know a cat has passed away, the disposal becomes a crucial next step. You have to research and see what your local and state laws are for burying them in your backyard. Some places allow it, others require burial in a pet cemetery and yet a few areas will not allow anything but cremation and/or taxidermy.

Do cats know when another cat has died?

Any experienced owner with multiple cats will tell you, yes cats know when another has died. That said, it depends on whether or not the dying cat takes its rainbow bridge journey in front of the other cats. But, guaranteed, just as the dying cat knows it’s readying itself for the life hereafter, the other cats in the house can sense this as well.

In some situations, their behavior may even become more erratic, show signs of emotional disturbance, or act in ways that appear to be “freaking out.” The closer the cats are, the more difficult it can be on the other cats left behind.