Why Does My Dying Cat Smell Bad? (Is It Traumatized?)

Why does my dying cat smell bad?

When cats are dying they smell bad for a few reasons. The most common is toxins in their body that build up as they draw closer to death. However, they also lose energy and will reduce, or stop grooming and caring for themselves which can contribute to the smell.

So, now you know. But, do cats know when they are dying? Will they typically hideaway when this is happening? What can you do to help your cat at this time? Keep reading for these answers, and more…

Contents show
1 Why does my dying cat smell bad?
2 How do I know if my elderly cat is suffering?
3 Do cats know when they are dying?
4 How do you help a dying cat?
5 What sound does a cat make when dying?
6 At what age do cats usually die?
7 Why did my cat die with its eyes open?
8 Do cats want to be alone when they die?
9 What are signs that your cat is dying?
9.1 01. Hiding away
9.2 02. Change of behavior
9.3 03. Their body temp changes
10 Do some cat owners choose to put their cat down?

How do I know if my elderly cat is suffering? 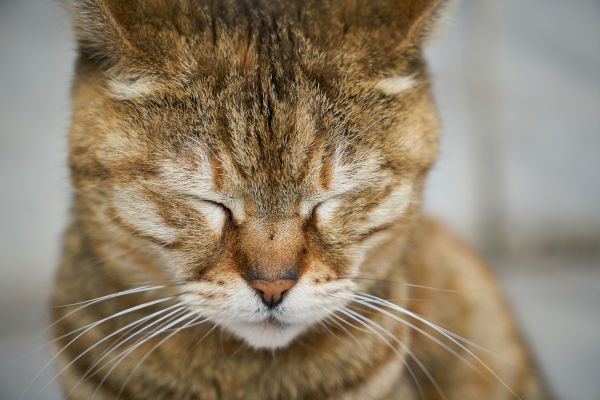 A cat with its eye closed.

If you fear that your elderly cat is suffering, or potentially dying, you can look out for some physical changes such as skin irritations, swelling skin, bad odor. But, there are also changes in their behavior that will be a sign of this as well.

These behavioral changes can include lack of energy to play games you may have played before or lack of grooming is another tell-tale sign. Think about it grooming its body, especially those areas where they need to bend, like their back, it required a lot of their energy.

Do cats know when they are dying?

Cats are generally aware that they are dying. They can detect the changes in their body and lack of energy, etc. This may be why they slow down on their usual daily tasks to compensate for these changes.

Cats rely heavily on body language so not only can you expect your cat to understand this but, if you have other cats indoors the chances are they will detect this as well. If your cats get on well hopefully the other cat will help to make your cat feel comfortable as they reach their final day.

How do you help a dying cat?

If you want to help a dying cat you can do this by offering some help with some basic grooming. This can include cleaning its fur and body areas with a damp, soft cloth that has warm water on it. Also, some gentle brushing of the fur after will help to maintain its appearance.

These are basic things that your cat would normally do by grooming itself. So, you will essentially be covering this task to help it out.

Cats take these grooming practices seriously, this is why you see them doing it so regularly. So, when they can’t do it it is a big problem for them. And, just this little bit of help can be a big thing for them.

What sound does a cat make when dying?

Cats are known to purr when they are dying. As strange as this may sound, considering it is associated with happiness it can happen. Obviously, if they are in extreme pain at that time there could be other sounds, so would depend on how horrific the death was.

If you are like me, you may have assumed purring can only signify a positive feedback loop from your cat, such as asking you to keep petting it, then you may have been surprised to hear this. However, don’t start to assume, if you hear your cat purring from now on that is dying.

At what age do cats usually die?

The average age for a cat’s life is from 13-17 years. However, this is based on an indoor cat (click to see if they can be transitioned to outdoors) that is known to live longer than cats exposed to the outdoors.

One of the main reasons for this difference is the risks of outdoors such as cars, other rival cats, dogs, or other animals. There are even several accidents such as cats eating rat poison, etc.

In fact, there are more risks than I can even list here. Not to say that outdoors is not beneficial for cats by the way.

Why did my cat die with its eyes open?

Cats die with their eyes open because of their lack of muscle control after death. They simply do not have any way to keep their eyes closed. This is similar to humans.

Maybe you have seen a TV show and noticed they often close the eyes of a victim? Well, this is similar to when a cat dies. And, it can be quite spooky to see this because it may seem like they are steering at you.

Do cats want to be alone when they die? 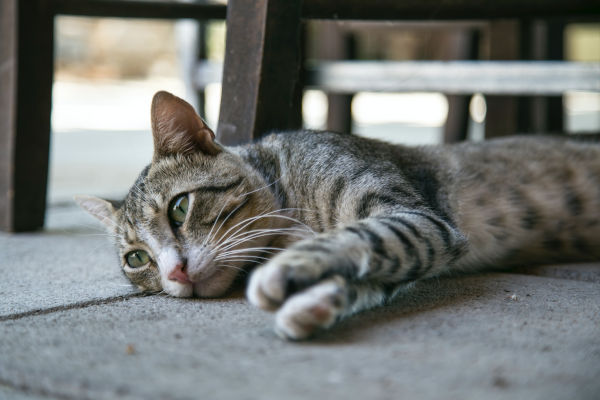 A sad-looking cat lying down.

Cats often die alone but not because they want to be alone. This is often an instinct to keep away from predators. At the stage when they are dying they are vulnerable and do not want to be attacked by a predator.

You may argue that at this stage whether they are targeted by a predator or not should not matter, right? Well, that’s not the case because, back in the wild, they had their other cats to consider. And, if they are found dead, it could alert the predators to the other cats that are alive. this is especially true for mother cats with kittens.

So, many cat owners have assumed this is just some psychological preference of theirs to die alone. But, hopefully, you have learned that is not the real reason for this.

What are signs that your cat is dying?

There are some signs that you can look out for to get an idea if your cat is truly dying. Here are a few:

Cats will naturally want to hide away when they are dying. They want to remove themselves from the prying eye of their predators. And, this is the natural way for them to keep a low profile at this time.

If you have had your cat for a long time you will know right away if it is acting differently. For some cats, this may be they are acting more clingy than usual. Believe it or not, this can also be a sign of it dying (would it go outside for this? click here). I know, earlier I talked about them hiding, and now I am saying they can be clingy, right?

Well, some cats can do the exact opposite of hiding. It depends on the cat because they are complex animals.

As a cat approaches its last days you will notice a drop in its body temperature. This will gradually drop until they pass away. It may not be that obvious at first but combined with the other signs it will all start to add u and become more obvious.

Do some cat owners choose to put their cat down?

Some cat owners do choose to put their cat down when they fear it is dying. The rationale for this is it is kinder to the cat to put it out of its misery. And the term used by vets is euthanasia.

This is not just specific to cats, it also includes, dogs and other pets. And, it is a topic that usually has divided and polarizing views, as you can imagine.