Why Does My Cat Watch Me Eat? (Is It Greedy?)

Why does my cat watch me eat?

Cats are at their most vulnerable state when they are eating since they tend to be very focused on their food and less cautious of their surroundings. They think it’s the same for us humans, so when your cat is watching you eat, it possibly guards you against potential dangers and wants you to feel protected.

So, now you know. But, do cats really like human food? Should you stop it watching you? Is it a bad idea to offer it some food? Keep reading for these answers, and much more… 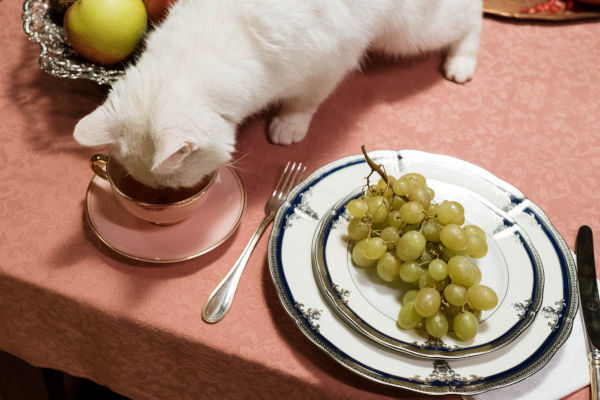 A cat drinking from a teacup on a table.

It’s not exactly that they like human food, most cats are quite content with their daily dose of cat food and some might even dislike trying out something new for their taste buds. They could be just really curious about what we consume and want to have an idea of it.

Raising cats is not that different from raising human babies. As they grow, they would show interest and want to mimic what you are doing, including eating what you eat. This especially happens when they haven’t been trained not to touch human food.

However, if your cat was rescued or adopted, there’s a good chance that they frequently had human food before you got them. In this case, they might prefer human food since it’s what they are used to.

Is it possible to stop your cat from watching you eat?

It is possible to stop your cat from watching you eat. If you notice that your cats have a specific food that they don’t like, putting a piece of it on your plate or putting it down on the floor then letting them smell it should do the trick. They would think that you are eating that, so they could lose interest.

Most of the time, they just want to know what you have, and smelling it might answer their question. You could also try feeding them with their cat food a couple of seconds before you eat so they will possibly be focused on their own food.

Should you stop your cat from watching you eat? 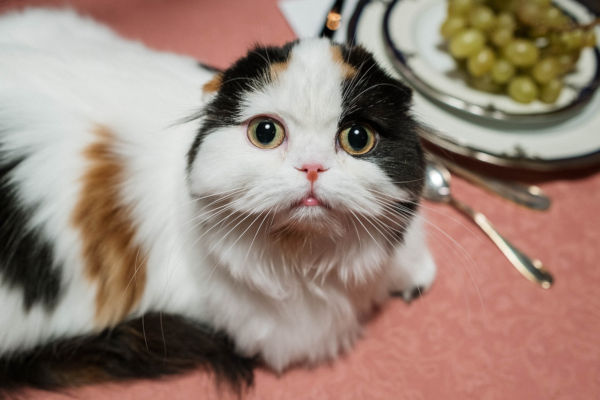 A cat looking at its owner on a dining table.

You should not stop your cat from watching you eat. Cats staring at you while you eat is not likely to cause any harm, so you do not necessarily need to keep them away. They are curious by nature and they are interested in what you’re doing because they care for you.

It might make you feel uncomfortable, but you can just consider it as a sign of them showing affection. They do many forms of non-verbal communication, and staring is one of many. Pay attention to their body language.

Why do some cats beg for food?

Unless you just missed their regular feeding time, cats may beg you and whine for food simply because they want your attention. If they are feeling neglected, they tend to feel stressed, and stress could affect their eating habits.

Begging for food might also mean that they are not getting enough nutrients. They may act differently if their diet lacks the nutrients that they need throughout the day.

Why does my cat just sit and stare at me?

Cats may just sit and stare at you because their instincts taking over. The staring surely doesn’t happen only when you’re eating, because they often feel the need to observe whatever’s going on around them and is their way of trying to look out for you.

Cats are clever creatures, too! If you usually feed them around the same time every day, they will adapt to this schedule and know when it is time for them to eat. When they get hungry, some cats may keep staring at you until you put a bowl of food in front of them.

Curiosity can cause their long gazes, too. They are interested in your every activity, so it is normal if their eyes follow you around in most of their waking hours.

Also, remember that cats have very sharp senses, so their eyes can be fixated on something which the naked human eye can’t see. For instance, they will observe a speck of dust or a tiny bug that made its way to you. There is also evidence that cats can see light wavelengths that are invisible to us.

Why does my cat want me to watch her eat?

A solid example of this is those videos you see about cats jumping off out of fear and shock when they see a cucumber or banana beside them as they eat. Such instances do not do cats any good, it could make them anxious.

It’s also possible that they just don’t want to miss out on anything you might do, so when you are near them while they eat, they know you’re not going anywhere.

Should you shout or discipline your cat for watching you eat?

Any animal should not be disciplined for watching you eat, or anything that they naturally do. Cats generally hate screams or loud noises. If they get extremely frightened, they can attack you in an attempt to defend themselves.

Watching you eat is not a big issue majority of the time, and they wouldn’t know what they have done wrong when you punish them for it.

They may sense that something is wrong as you raise your voice at them, but shouting might just scare them and won’t make any difference. It may cause stress, anxiety, or future misbehaviors. Keep in mind that training a cat is a lot different from training a dog.

There are other options you could explore to lessen your cat’s staring as you eat.

Why is it a bad idea to offer your cat your food?

It is a bad idea to offer your cat food because they might form a habit out of it. This would also mean more of them staring at you while you eat as they will expect you to give them some as well.

Also, it could lead them to lose interest in cat food and prefer what you eat more if they come to like it, which could result in malnutrition.

More importantly, there are plenty of foods that are not good for cats. If they acquire a habit of eating human food, they could resort to sudden jumping on tables and to get their share.

Do cats eat better if you stay with them?

They feel safer when they have your company as they eat, and this way they would eat better. They will have a more comfortable time finishing up their food. This is known as affection eating or attention eating.

As opposed to some dogs, cats even like to be petted during mealtime. You may also notice that if you go away, they will stop eating. They tend to feel like they might be attacked during their mealtime if you are not around.

They are really fond of their humans so it’s amusing for them to watch everything you do. The smell of your food may also contribute to this behavior, as well as if you’ve been giving them tidbits of food while you are eating. They might be expecting you to give them something from the table every time.

It’s also possible that your cat is trying to remind you that it’s their time to eat, too.