Why does my cat sniff my nose?

When your cat moves their face close to sniff your nose, then this is a sign of affection and trust. After all, no self-respecting predator would voluntarily move so close to your teeth! Cats also have a number of scent glands in their faces, in places such as their lips, forehead, cheeks, and chin, so this closeness also allows your cat to mark your face lightly with their scent.

So, now you know. But, could this be related to a recent meal? Does this mean my cat regards me as its family? Do cats like it when you “boop” their nose? Keep reading for these answers, and much more…

Contents show
1 Why does my cat sniff my nose?
2 Could a recent meal make your cat sniff your nose?
3 Why does my cat go nose to nose with me?
4 If a cat sniffs your nose does it mean it sees you like family?
5 Do cats like it when you Boop their nose?
6 Is it okay to touch a cat’s nose?
7 Why do cats sniff each other’s noses?
8 Do cats rely on their sense of smell more than sight?
9 Does my cat think I am kissing it if I boop noses with it?
10 Why is my cat bumping noses then trying to bite me?
11 Does booping noses with your cat improve your relationship?

Could a recent meal make your cat sniff your nose? 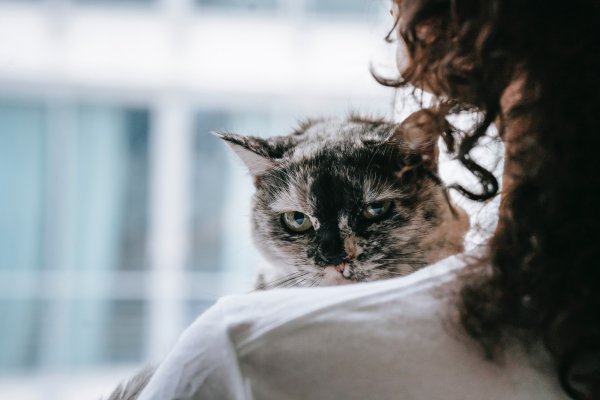 Cat being held by its owner.

This can also occur from time to time if you’ve recently eaten something yummy, in which case your cat is just getting a closer whiff to identify what it was (likely followed by investigation as to if there is more!).

Why does my cat go nose to nose with me?

A ‘nose poke’ from your kitty is a highly-rated badge of trust. Think about it. Your cat is making themselves vulnerable when they do this with you, so when they do, you can know 100% that you have their affection and their trust.

Cats do this with other cats, mostly, but nose-pokes are also shared with beloved humans, dogs, and other animals whom your cat is exceedingly fond of.

This is not a gesture that you may force, however, and pushing your face close to a cat that doesn’t trust or know you very well looks like an aggressive move to them and might get you bitten or scratched.

You’ve got big teeth, after all!

If a cat sniffs your nose does it mean it sees you like family?

Yes. Cats only do this when they are comfortable with the receiver of said sniff and it is always a gesture of trust and love. If you have a dog or another cat in the house, then you may see nose-sniffs exchanged from time to time if they get along well together.

If you’re really lucky, the dog will respond with a whole lot of licking and the ‘yuck’ face that your cat will make you wish you had the camera ready (Click here if your cat is shy)!

Do cats like it when you Boop their nose?

Nose-booping is a cat-favorite in the affection department and provided that your cat has nose-booped you before, then you generally have a pass to nose-boop whenever you like.

That said, use it responsibly. If your cat is in play mode or starting at something that they wish to stalk, then a random nose-boop may startle them and could even get you a bite or a swat.

Try petting your cat first to make sure that they are in a nose-booping mood and if they respond affectionately, then feel free to boop with abandon. Think of it as the kitty equivalent of a ‘High Five’!

Is it okay to touch a cat’s nose? 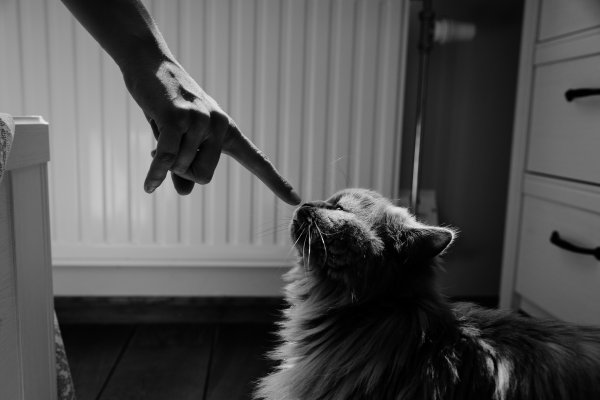 Cat being bopped on the nose.

Touching a cat’s nose requires a high level of trust, so never do this with your friend’s cat or a feline who doesn’t really know you yet, unless you are 100% sure that this cat will allow it.

Cats are very particular about being touched in the first place and if you try to touch a kitty’s nose when they don’t want you to then a bite or a scratch may well be coming!

If the car is rubbing their face against you or against your hand when you are petting them, however, then you can likely touch their nose, as those face-rubs mean that the cat trusts you already and is busy marking you up with their scents. That said, never touch a cat’s nose without invitation or you might regret it!

Why do cats sniff each other’s noses?

Nose-sniffing is common across all species of cats. When they are kittens, it is notable that their first introduction to their mother is generally a nose sniff. With older cats, nose sniffs serve as a form of affection and a means of establishing mutual trust. It is also used as a handshake between your cat and other animals once they already know each other.

Nose-sniffing between cats has an extra depth to it, however, and it’s not just knowing what the other animal had for lunch. Cats have olfactory senses which are 200 times better than our own, so that gentle sniffing gives each cat an ‘instant profile’ of the other animal’s overall health!

While they seem ‘mysterious’ to us, cats communicate quite a lot with seemingly innocuous greetings like a nose sniff. You just need to know their body language and the rest will – apologies in advance – ‘make scents’!

Do cats rely on their sense of smell more than sight?

Cats actually have more than 200 million sensors in their noses for discerning scents, as opposed to a human’s paltry 5 million. As such, cats do indeed tend to rely on their sense of smell more often than their eyes. Cats also receive tactile information from their whiskers, which can sense sound vibrations and help them identify the true location of their prey.

When they assess us with their noses, they don’t just get identifying scents. Cats can get health information that humans simply aren’t equipped to detect. With other cats, it’s a pretty comprehensive profile, but it is likely that they can smell chemical changes that occur with human diseases as well.

Does my cat think I am kissing it if I boop noses with it?

No. Cat’s don’t really have a concept of kissing and a nose-boop is more like a handshake where scent information is exchanged. Your cat rubs some of its scents off onto you and also gets a whiff of your own scents, noting chemical changes that may be at play in the process.

While a nose-boop is indeed intimate, it is definitely not a kiss.

Why is my cat bumping noses then trying to bite me?

When your cat bumps noses with you and a bite follows, then this is not intended to be nasty, but rather your cat is trying to communicate with you. Some cats do this to wake you, for instance, if they are up early and they don’t like the look of the food bowl.

Other cats may give a light bite on the nose to indicate that it is playtime! Finally, cats that bond with other cats often groom each other, and this behavior also gets extended towards humans. Grooming includes licking and biting as part of the process, so while a nose-bite seems like a cause for alarm, your cat is only letting you know that they want you to clean them.

Some petting is called for at this time and a brush (click here for my best one) might be just what the doctor ordered – just don’t rush your kitty to the bath. Cats and humans have very different ideas about what constitutes a proper cleaning!

Does booping noses with your cat improve your relationship?

Certainly, although mileage may vary from cat to cat. Take account of your cat’s body language and how often they express their affection with a nose-boop. One of the wonderful things about having a feline companion if that each is very much unique.

Some cats, for instance, may prefer to show their affection simply by sitting close to you, giving you a ‘knock it off’ nip when you attempt to take advantage of this to pet them. Just as some humans kiss more or less than others, some cats love to boop noses, and others… well, not so much.

If your cat is one of the ones who love booping, then definitely take advantage of this and ‘boop’ away. Like high fives with your best friend, booping is a great way to show mutual trust and affection!