Why Does My Cat Sit Like a Kangaroo (Is This Normal?)

If your cat is sitting like a kangaroo, or you have just seen a cat doing this, you may be wondering why this has happened and if this behavior is normal…

A cat may sit like a kangaroo because they are excited, fearful, want your attention, in pain, or have some deformity making this the best choice for them. Depending on which one it is it could be a temporary movement due to their mood or a long-term movement because of the form of their body.

So, now you know. But, are cats comfortable sitting like this? What is cat kangaroo syndrome? Do some cats do this to get treats? Keep reading for these answers and much more… 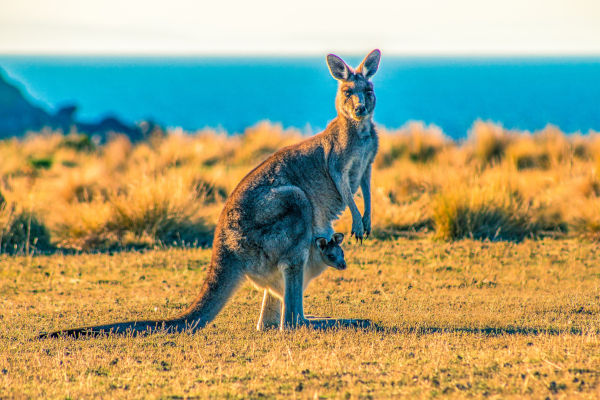 Earlier I briefly mentioned a few reasons why your cat may sit up like a kangaroo. Therefore, in this section, I will go into more detail on each one:

Some cats get genuinely excited. When this happens they may stand up on their hind legs and resemble a kangaroo. These cats may find it hard to contain their excitement and just want whatever you are offering.

An example of this may be when you are just opening some cat treats (Click here to see the reviews, on Amazon #Ad). As you open them just the anticipation of the opening could be enough to get your cat excited.

When this happens they may sit or stand on their hind legs and beg for them to be offered over quickly, adorable, huh?

If your cat is fearful they may get anxious and curious about what is coming their way. When this happens they may sit up to get a look at what’s coming, or use it as a method to look bigger than they really are.

In a way, you could compare this behavior to some lizards (Click here if your cat also brings these to your home), like Bearded Dragons. Why? Because they are known to puff up their throats to intimidate their enemy similarly.

Cats love being petted, or shall I say most cats. Why? Because some cats don’t like being picked up by just anyone, or petted. But, for those that do, they crave your attention.

So much so that they may attempt to get your attention by sitting up like a kangaroo, like this. It could either be to catch your eye while you play with your phone or to touch your hand for a big hint.

Some cats are comfortable sitting like a kangaroo. This is because of the way their body is formed. These cats, in particular, may have deformities that make it more practical to use their hind legs more.

Other cats, regardless of deformities, may still prefer this stance, weirdly. Just because it is a habit that has developed over time.

What is cat kangaroo syndrome?

Cat kangaroo syndrome is a condition that causes a cat to sit on its back legs and resemble a kangaroo. It is also known as “Twisted Leg” or “Twisted Kitty”.

If you see a cat in this position regularly there could be a chance that it has this. But, without close inspection, it’s tough to say.

What is a kangaroo kitten?

A kangaroo cat or kitten is another word used for a Squitten. According to Wikipedia, these cats have genetic abnormalities causing them to sit up like a squirrel.

Some people say they also resemble a kangaroo, hence the reason they are also referred to as “kangaroo kitten”.

Do kangaroos get along with cats?

Kangaroos are not known to get along well. Therefore they should not be mixed if possible. Kangaroos can be quite dangerous if provoked so it’s not worth letting them get angry.

Kangaroos have a vicious kick and punch. However, the reality is cats and kangaroos are not a likely mix for most domestic homes so it should be quite easily avoided.

But, there are some rare visuals of a kangaroo and cat making up, see the video below. This is interesting, but not regarded as the norm.

Do cats without bones in their front legs sit like a kangaroo?

There has been a report of one cat born without bones in its front legs. This cat is more comfortable on its back legs for this reason. And, to the passer-by, it looks like a kangaroo because of the way it sits on its hind legs.

Unfortunately, this cat does not have the option of resting on its front legs so it has no option to do this. So, it’s more of a practical choice rather than a preference.

Do cats stand like a kangaroo to get treats?

Some cats do like to get hold of their treats as soon as possible. When this happens they may stand up on their back legs to try and grab them. When they do this it resembles a kangaroo.

The anticipation of the cat treats (Click here to see the reviews, on Amazon #Ad) can send some cats wild and make them do things like this.

Munchkin cats are born with small front legs. For this reason, they prefer to rest back onto their back legs and not put the weight on these front legs.

When you look at them resting on their back legs it resembles kangaroo sitting in their natural habitat. These cats are used to this way of life because they are typically born this way.

As opposed to a cat that has suffered an injury and had a lifestyle change. So, they see this kangaroo movement as a standard way of moving around.

Why do some declawed cats sit like a kangaroo?

After a cat has been declawed it may encounter some pain temporarily. When this happens some cats may choose to put weight on the legs with the least pain.

In some cases, their back paws may be less painful or have no pain. And, if that happens they may choose to rest their weight on those back legs and sit up like a kangaroo.

Do cats without front paws move like a kangaroo?

If a cat has lost its front paws, or legs they have no choice but to use their back legs to sit and move around. When this happens some say they resemble a kangaroo.

In this situation, the cat has no choice but to use their back legs to get around in this way. So, it is a survival method rather than a habit of choice on their behalf.

Do cats feel safe when they sit like a kangaroo?

When a cat sits like a kangaroo out of choice, meaning it has no injuries, deformities, or health conditions forcing it to do so, this could be a sign that they feel safe. But, they could also feel fear and want to make themselves look bigger.

This is because when they sit on their hind likes like for attention or to grab a treat they are generally happy and have no concerns. But, if it’s to make themselves look bigger out of fear, it the complete opposite.