Why Does My Cat Scratch The Mirror? (Anger or Bored?)

Why does my cat scratch the mirror?

Your cat may scratch your mirror for several reasons such as curiosity, boredom or even self-defense. Regarding the latter, self-defence, it may be because it sees its reflection as an aggressor and is confused as it stares and approaches it.

So, now that you know. But, do cats understand its them in the mirror? Why do cats attack mirrors? Can a cat’s claw damage a mirror? Keep reading for these answers, and much more…

Contents show
1 Why does my cat scratch the mirror?
2 3 top reasons why your cat scratches the mirror:
2.1 1) Curiosity
2.2 2) Self-defence
2.3 3) Boredom
3 Do cats understand it is their reflection in the mirror?
4 Why do cats attack mirrors?
5 Will a cat’s claws damage a mirror?
6 Why can’t my cat see himself in a mirror?
7 What does my cat think when I put him in front of a mirror?
8 Why doesn’t my cat react to its mirror reflection?
9 How do I stop my cat from attacking her reflection?
9.1 01. Hide the mirrors
9.2 02. Not Hiding
9.3 03. Training Your Cat
9.4 04. Give yiur cat time to adjust
10 Can a cat hurt itself fighting with its reflection in a mirror?

3 top reasons why your cat scratches the mirror: 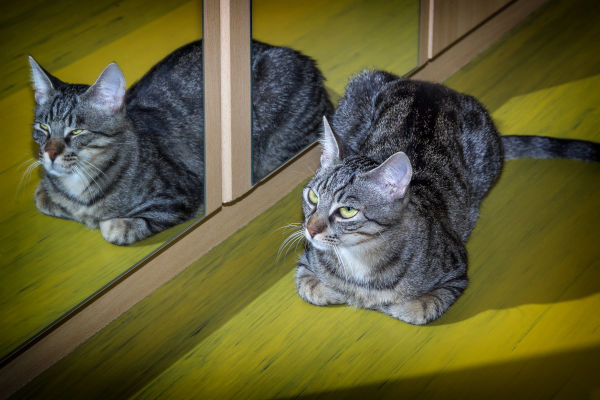 A cat in front of a mirror.

So, earlier i mentioned a few reasosns why your cat may be scrtacing your mirror. Therefore, in this section, I will explain each one in more detail:s

First things first, cats are super curious by nature. They are well aware of their surroundings, the objects around them, and are keen to explore anything that fascinates them.

To learn more about an object, a cat usually uses its paws to scratch it and feel it. Plus, mirrors have unique reflective properties that can draw anyone’s attention. The scratching comes down to the cat’s desire to learn more about mirrors and reflections.

Another possible reason for a cat scratching the mirror is self-defense. Defend themselves from what? Well, their own reflection!

These innocent creatures may see their reflection in the mirror as an intruder or a threat. In this scenario, scratching is a self-defense mechanism for cats as they are trying to protect themselves and their territory.

Cats can get easily bored, and they are always up for a fun game. A mirror can be an exciting object for them to entertain themselves with and keeps them occupied for quite some time.

Do cats understand it is their reflection in the mirror?

According to research, cats cannot recognize themselves in a mirror. In fact, scientists have been studying the concept of self-awareness in animals for more than half a century. They believe that cats and many other animals do not have the cognitive capabilities to identify with their reflection.

This also explains most of this funny behavior associated with mirrors.

Why do cats attack mirrors?

Cats attack or scratch mirrors because it acts as a negative stimulus for them. Aggressive behavior usually stems from fear, as the cat genuinely believes that it is standing face-to-face with an intruder.

Will a cat’s claws damage a mirror?

Lasting damage to a glass mirror is not very likely. There is no solid studies to back this up though. And, it depends on a number of factors like strength, quality, and scratch-resistance of the glass, as well as the sharpness of the cat’s claws.

One way to minimize the chances of damage is keeping the claws trimmed or simply keeping the cat away from mirrors or glasses.

Why can’t my cat see himself in a mirror?

Technically, your cat most definitely ‘can’ see itself and will react to the image they see in the glass. However, it simply does not know ‘who’ the mirror-cat is.

It actually requires a high amount of sophisticated knowledge and intelligence to truly understand the concept of reflection. First, the animal needs to have an understanding of its self-image. Cats do not know what they look like. Even human newborns don’t have this ability.

What does my cat think when I put him in front of a mirror?

It is hard to tell what your cat is thinking when you put it in front of a mirror. Plus, it varies from cat to cat and they all have different levels of intelligence.

All owners have their own perception and opinion about how their cat reacts in front of a mirror. Some actually feel that their cat can recognize herself whereas others say that their cat seethes and hisses at its reflection, indicating aggracession.

However, this is all guesswork, and we ultimately believe what science tells us about a cat’s cognitive abilities.

Why doesn’t my cat react to its mirror reflection? 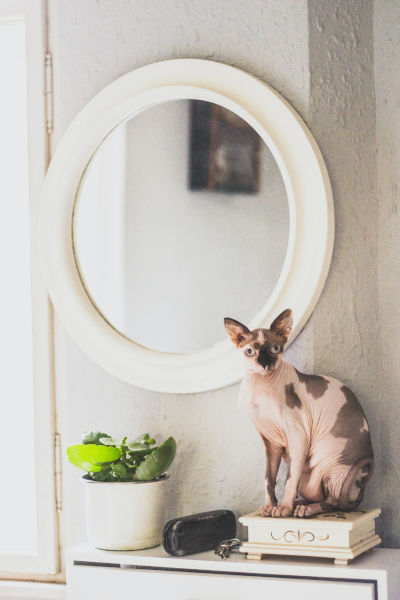 Cat near a mirror.

Some cats do not seem to react to mirrors and this is also normal. A number of factors could be at play if you observe this behavior. For some cats, an image of another cat simply does not hold their attention. This might be because there is no smell and no sound attached with it, so the cat remains unbothered and does not sense it as a real animal.

Another reason for this could be repeated exposure to mirrors. Many cats are initially intrigued by the reflection in the mirror. However, cats that have been seeing mirrors frequently may lose interest as they become used to it over time.

How do I stop my cat from attacking her reflection?

There are a variety of ways to approach this situation and prevent your cat from attacking her reflection. You can actively train your cat, avoid mirrors or let them face their fear themselves. Different methods have worked for different people so you can try what you feel is suitable.

One simple way to do this is hiding mirrors from your cat. You can achieve this by covering up the mirror with a cloth or sheet to block it from your pet. This is the most simple and quickest solution to the issue as the incident can completely be prevented.

However, the alternate strategy is to ‘not’ hide the mirrors. Many people believe that blocking the reflection will result in a higher startle response, if and when, your cat does come across a mirror by chance. It is also believed that cats can detect when you purposefully hide something from them and this instills more fear in them.

With training and patience, many cat owners have slowly helped their cats adjust to their reflections. One suggestion is to pacify an aggressive or scared cat by walking up to the mirror and tapping it gently. You can softly repeat this a few times until your cat realizes there is nothing to be scared of.

One word of advice here is to avoid petting the cat while tapping the mirror. This might build more fear and provoke it to lash out.

04. Give yiur cat time to adjust

Finally, many people simply believe in giving it some time. You can allow your cat to face their fear until it goes away on its own. Animals recognize each other through their sense of smell. Eventually, you cat will realize there that this ‘intruder’ cat has no scent, and will start to perceive it as a non-threat. So, the issue is likely to resolve on its own.

Can a cat hurt itself fighting with its reflection in a mirror?

It is very unlikely for a cat to hurt itself in this way. Most of the times, it is harmless and even comical as the cat tries to fight with its reflection.

However, we would advise you to not leave your cat unattended, especially if the glass is fragile. If your cat is getting too aggressive and hurling itself into the mirror with great force, you should take her away from the mirror. If there is any chance of the mirror shattering, it can cause serious physical harm and distress so it is best to be careful.

Why Won’t My Cat Sit On My Lap Anymore? (+ Solution)

Why Is My Cat Obsessed With My Face? (Avoid This Mistake…)