Why Does My Cat Never Hiss? (Personality or Problem?)

Why does my cat never hiss?

Your cat may not hiss for several reasons such as its personality, a recent health issue, or a long-term vocal cord issue. If its the former, a personality trait, then its normal and some cats just choose not to. Otherwise, you may need to get your cat checked over with your vet.

So, now that you know. But, should you be worried if your cat hisses? What do some cats do instead of hissing? At what age do most cats start to hiss? Keep reading for these answers, and much more…

3 Top Reasons why your cat may not hiss: 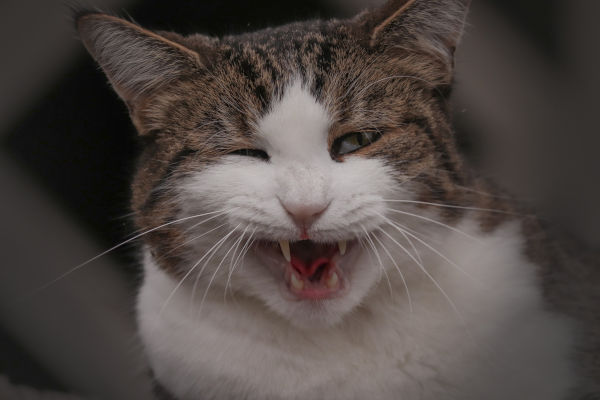 A cat hissing and looking scary with teeth exposed.

Earlier I mentioned a few reasons why your cat may not hiss. Therefore, in this section, I will explain each one in more detail:

There is a good chance that if your cat is not hissing it may just be because of its personality type. For whatever reason, some cats just do not choose to hiss, and it’s not part of their personality type.

This is the same reason one cat may love a hooded litter box, and another won’t, it’s just their preference. And, in many cases it’s not a conscious choice it’s just the way they are.

In some cases, you may have a cat that was hissing, and you have seen it do it. Then, all of a sudden it stops. This could be an issue. Meaning, it may have picked up a health issue making it difficult or not possible to hiss.

If this happens you have no choice but to get it checked out immediately with your vet to verify your concerns. If it is a genuine health issue you can get some treatment.

If it is not, you have lost nothing. And, then you can look into what else it could be.

There is also a chance that your cats vocal cords could have an issue. This could be from birth or a recent change. Either way its something that will need to be inspected by your vet.

If this is the case you may notice that your cat chooses a different sound, or the other sound comes out naturally because they can’t hiss, such as a growl.

Why do cats hiss?

There are many reasons why a cat may hiss. To help you here are some of the common reasons for this:

The most common reason for a cat to hiss like this is because it feels threatened and wants to warn the perceived aggressor to back up. It is their first, and in most cases, last warning before they attack.

Some cats may hiss and won’t do much after that. But, its not worth hissing back at it, or challenging it, because it may follow through with this vocal warning.

During play time young cats, or kittens, may go too far and get rough. When this happens one cat may hiss at the other cat to calm down the play. Effectively its another form of warning, but bought on by overexcitement or rough play.

Some cats may get antagonized by small things such as being petted incorrectly, or picked up by a random person. If this happens a hiss could be sounded to warn you, closely followed by a bite, or scratch.

To avoid this it is important to work out what antagonized your cat in the first instance, for example petting it incorrectly, then either not doing, or improving it.

Should you be worried if your cat hisses at you?

If your cat hisses at you its important to take notice and understand why, but do not be worried. The reason is, its likely to happen at some point within your cats lifetime.

If you are lucky it won’t be directed to you. But, even if it is, its not the end of the world. You just need to give it space, understand the issue and learn not to do it again.

The good thing is, cats rarely hold grudges. So, they are unlikely to hiss and then hate you. It is more likely to do it, then move on with its day.

What do some cats do instead of hissing?

If your cat can’t, or won’t hiss it may choose to growl or howl instead. It may look odd if you have not seen this response from a cat in this context, but some cats have no other choice.

In some cases, the cat may not do anything, so there will be no direct replacement. This is applicable when the cat has a health issue or problems with its vocal cords.

Do cats ever play hiss?

Cats are not likely to play hiss. They may play rough and then get aggetatitate. But, if that happens the hiss will be a genuine warning to their opponent to calm it down or its going ti get serious.

Think of it as a play fight with your sibling as a young child. It may start off fun and cute, but then it escalates, a liberty is taken pushing you over the edge then warning words are let off, right?

With cats, no difference. But, it would not be classed as “play hissing” at all.

At what age do cats learn to hiss?

Cats are expected to start hissing, or learning to hiss, after approximately 2 weeks old. At this stage their eyes should be opened and they are getting more agile and playful.

If you have a litter of cats in your home you may see them playfighting and hissing frequently until they learn their boundaries and whats acceptable. You may even see their mother hissing or disciplining them.

Why is my cat hissing when petted?

If your cat is hissing when being petted it would suggest it fears you, or just does not want to be touched at that time. If that’s the case it may just warn you to back off in this manner.

And, it is wise to give it some space if this is happeing because you have no idea if it will follow through with its threat.

Why is my cat hissing at the wall?

If you see your cat hissing or growling at the wall it may seem odd but its a clear sign its aggetatied, stressed or been antogonsied by something. You may just have caught it venting its frustration.

When this happens it may not be wise to try and pick it up.

Is it normal for a cat to hiss at another new cat?

It is normal for a cat to hiss at a new cat. This is because it is working out who is boss and what threat the other cat may pose. However, these cats need to be monitored and not allowed to be left unsupervised.

This has to be the way until they are proven to get on well and not a danger to each other.