Why Does My Cat Lick The TV?

Why does my cat lick the TV?

Sometimes cats will lick the strangest things and generally, this is harmless. Your cat just wants to know what the TV tastes like and so they are giving it a lick. Their curiosity it understandable, especially if the TV is new, as cats are very scent-driven creatures.

So, know you know. But, should I be worried about this? How can I prevent my cat from licking the TV? Is this behavior normal? What does a TV look like to a cat?

Contents show
1 Why does my cat lick the TV?
2 Should I be worried if my cat is licking the TV?
3 How can I prevent my cat from licking the TV?
4 Is it normal for cats to watch TV?
5 What does TV look like to cats?
6 Is watching TV bad for cats?
7 Is it OK for your cat to lick you?
8 What does it mean when a cat licks everything?
9 How do you know if your cat has pica?
10 Why does my cat lick the back of the TV?
11 Could the sound of the TV attract your cat?

Should I be worried if my cat is licking the TV? 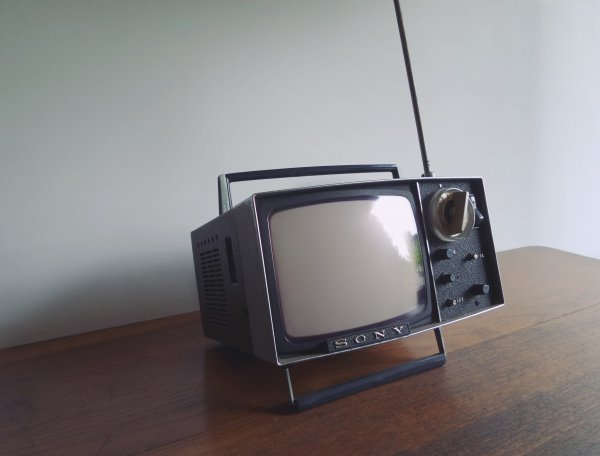 If your cat seems to be licking EVERYTHING in the house, however, then this could be a sign of either obsessive-compulsive disorder or possibly a nutritional deficiency related condition known as ‘Pica’.

While the TV doesn’t smell much or at all to us, you’ve got to keep in mind that cats have about 14 times our sense of smell and so it’s only natural for them to wonder about this strange and new ‘magic box’ in the living room.

How can I prevent my cat from licking the TV?

The best approach to stop your cat from licking the television is to replace this behavior with something more constructive. Initiating playtime with your kitty when they do this can help to distract your cat and funnel some of that energy into something healthier.

A bit of string or a game of ‘toss the rubber ball’ can distract your cat from their licking behavior and provide a bit of fun and bonding for the both of you. This is also quite effective if your cat happens to be licking the TV out of stress, as playtime is a cat’s favorite distraction.

Is it normal for cats to watch TV?

Cats love to spend time with us and it’s possible that your cat is just watching the TV as a way of spending time with you. They notice that you are spending a lot of time in front of it and they just want to do this with you too.

It has also been suggested that cats that enjoy the television may have much more developed hunting instincts. The myriad of colors and the fast-moving shapes on the television are appealing to your cat because they are similar to prey, giving a TV the same appeal as a captive animal being kept inside the house. 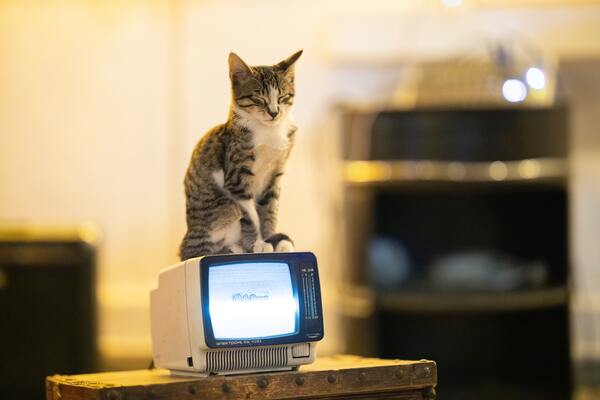 A cat sitting on a TV.

Television is a very different experience for cats. This mainly has to do with the number of cones and rods in their eyes. Humans have more cones in their eyes, which means that we can see more colors.

It is believed that cats can indeed see colors, but they are much less saturated, especially with colors such as red.

This means that the image, while color-balanced for humans, is likely closer to a black and white photograph with dashes of dull colors here and there for your cat. By contrast, cats also have more rods in their eyes, and this is what allows them to see in the dark. This likely means that television at night is probably lit up bonfire-bright for a cat!

Finally, cats can also process images at a faster rate than humans. While we process them at about 45 Hz, cats are running much faster at 70 – 80 Hz. When you factor in that our TVs show images at about 60Hz, then what looks like a continuous, moving image to us probably looks like a flickering collection of images to cats.

Rather than annoy them, these flickering assortments of images on the TV do seem to get and keep some cat’s attention, though with the color variation and the brightness then a TV is definitely a different experience for a cat than what we are used to.

Is watching TV bad for cats?

If your cat wants to watch the television with you then that is certainly fine, but you might consider giving them a little television of their own in the form of a nice kitty tower or a perch of another kind next to a window. This lets them watch birds and other creatures in the yard and can keep them fascinated even when the TV is off.

This is also a good strategy if your cat seems to be spending too much time watching TV. Aside from a perch, you could also offer some new toys to keep them occupied — too much television may be a sign that your cat is bored and could use a little more activity during the day.

Is it OK for your cat to lick you?

When your cat licks you, this is a sign of trust and affection. Cats will often groom each other and it starts all the way back from their childhood. Mother licks and nibbles at the kittens, teaching them to groom, and they learn to help to keep each other clean.

It is also possible that you just taste funny, due to exercise or from simply leaving the house, and your cat is just curious and tasting to get a little salt from the sweat or simply to get a better idea of what it is that they are smelling on you.

What does it mean when a cat licks everything?

If a cat is constantly licking many different non-food items in the house, then this may be a sign of a condition known as ‘Pica’. Believed to be related to a deficiency in fat or fiber in the diet, the licking can also change to actually eating these non-food items and become quite dangerous.

If you see this behavior then a vet check-up is a good idea just to rule this out. If by everything you mean that your cat seems to be overgrooming themselves, then this is also a good reason for a trip to the vet to investigate.

Sometimes cats may sustain cuts or suffer from things like arthritis which are not readily apparent, and in cases like this, they will typically lick themselves more often in an attempt to help themselves to heal. A quick trip to the vet can help you to get this sorted out quickly.

How do you know if your cat has pica?

If your cat is licking and sucking at non-food items in the house or worse, actually consuming them, then they might well be suffering from a condition known as Pica. Common items that cats will target include cords, bits of wool, and plants, but just about any small and non-food item may be used.

Often this will manifest with other systems such as diarrhea, constipation, drooling, and even vomiting, and while there are a number of conditions that may cause this your vet will need to run some routine tests in order to determine the best course of treatment.

Why does my cat lick the back of the TV?

Just as humans may become obsessed with objects of curiosity, your cat can become fascinated with seemingly odd things like the back of your television. As the moisture from licking poses a potential danger, your best bet is to distract your cat from the television by initiated playtime with them in order to help subvert this behavior.

It is possible that your cat is simply bored or curious. Thankfully, cats absolutely love to play, and you should be able to distract them from the TV (Click here if your cat is going behind the TV) with very little effort.

Could the sound of the TV attract your cat?

Yes! Cats have excellent hearing and so it’s not uncommon for them to be attracted to the sounds on the television. Barks from TV dogs might make your cat jump, whereas the sound of birds might even make them curious. This is completely normal, so unless your cat is swatting at the screen then this behavior is nothing to worry about.