Why Does My Cat Kangaroo Kick? (Vicious or Playful?)

If you have noticed your cat do a kangaroo kick you may be wondering why this has happened, and if it’s similar to other kicks they use…

Why does my cat kangaroo kick?

Your cat may kangaroo kick for several reasons such as just playing, as part of an attack, or if it is generally feeling vulnerable and defensive. There are other reasons, but these are the most common. Although it is called a kangaroo kick, it is not identical to a real kangaroo because they cannot balance on their tails like them.

So, now you know. But, is this kick regarded as dangerous? Why is this kick slightly different from a conventional kangaroo kick? Should you be concerned if your cat is doing this?

3 reasons why your cat will kangaroo kick: 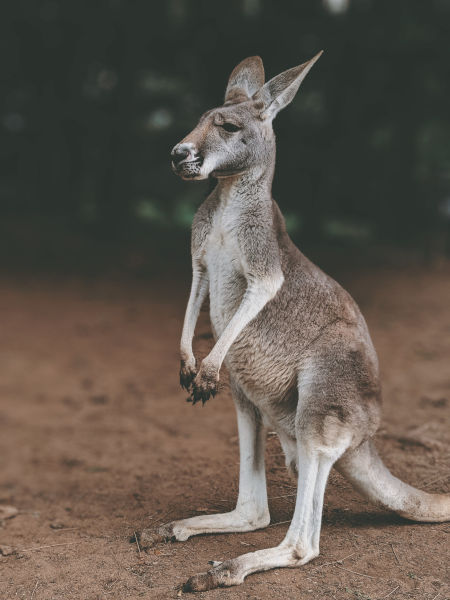 A kangaroo standing on its hind legs.

Earlier I gave you some brief examples of some common reasons why cats may kangaroo kick. So, in this section I will give you more detail on each of these issues:

When cats are playing you may see them roll over and wrestle. While doing this they will kick with their hind legs. This is commonly referred to as a kangaroo kick. You may see young cats, or kittens do it as they are typically more playful and full of energy.

Sometimes these kangaroo kicks can evolve from a gentle game to a full-on attack. Or form part of a planned attack. This kick is not the cat’s preferred method for a serious attack, for that they would more likely use their front paws, claws, and teeth.

If a cat feels vulnerable and defensive it may use this kangaroo kick technique to fend off its aggressor. Again, this is not their best choice of attack, but as a defense, it may have to be used if they are caught off guard.

What is a kangaroo kick?

A true kangaroo kick is when a kangaroo raises its entire body weight using its tail and launches its legs into its opponent. This kick has tremendous power and can seriously harm a person. A cat kangaroo kick is not anywhere near as ferocious.

A cat’s version of this kick can be seen when they fall onto their side and launch their hind legs into their playmate or aggressor.  When you look at these kicks side by side, meaning a cat doing it and a kangaroo, the latter looks way much scarier.

Why do Kangaroos kick?

Kangaroos kick because it is their most reliable means of defense against a predator or aggressor. They know their legs have some serious power because they are used to make them hop around as they do.

However, they also have the ability to box as well as kick. They are often mimicked in cartoons or video games as kickboxers for this reason. Maybe you have seen an advert before with a sporty-looking kangaroo?

Is your cat’s kangaroo kick dangerous?

This does not mean that a cat’s kick could not harm you, or another animal. It’s just when compared to the real one, it is no comparison really.

The reason why cats can’t kick exactly like a kangaroo is because of their tails. Cats simply do not have the same strength in their tails. A kangaroo can lift their entire body weight, which can be up to 200 lbs, and balance confidently.

That is a lot of power in their tail. A cat cannot do this. And, their tail probably couldn’t even support them leaning up. So, for that reason, their kick cannot be seen as an exact comparison to a kangroo.

Is a cat bunny kick similar to a kangaroo kick?

A cat’s bunny kick is similar to a cat’s kangaroo kick. This is because they may roll over and use their hind legs, but not their tail like kangaroos do. Some people will often use these terms interchangeably, for that reason.

So, if you have seen a cat do a bunny kick you may be forgiven if you assumed this was a kangaroo kick, due to their similarities.

How many pounds of force are in a kangaroo kick?

A kangaroo can kick at the force of 850 PSI. This is the Red Kangaroo. These animals reside in Australia and with this level of force they can cause serious damage. In fact, it’s so powerful it could easily irreparable damage to a human.

Other animals, such as zebras, horses, or crocodiles are also known for having really powerful kicks as well. Their kicks are typically regarded as dangerous.

Should you be concerned with your cat’s kangaroo kicks?

A cat’s kangaroo kick should not be a major concern. They can be used to wrestle with their playmates but are not even close to the impact of a real kangaroo’s kick.

This doesn’t mean you take them for granted because any attack is dangerous, but compared to a real kangaroo it is a minor concern.

Why do cats grab your hand and kick?

Cats may grab your hand and kick as a way to play and wrestle with you. They often do this with toys or their littermates. It can be aggressive at times, but in most cases, it’s a playful intent.

So, if your cat has grabbed your hand in this way before then you will now know what the chances are, it means to play with you.

Do the spurs on a Kangaroos foot cause more damage?

As well as ferocious kicks, kangaroos have spurs/claws on the end of their feet. When they make contact with their opponent, for example, a dog, or even a human, they can cause serious damage.

These claws are known to puncture an animal while they fight and one of the reasons why these kangaroos are feared in their native countries, like Australia.

How can you tell if a Kangaroo kick is a game or aggressive?

The best way to assess a cat’s intention, when kangaroo kicking, is their body language. Small things such as the ear position, teeth being shown, noises, such as hissing, are all subtle signs that your cat is not playing games and is feeling aggressive.

It is easier to see what I mean when you see it. We humans have a good way of detecting the mood of a situation naturally. A cat will often make this quite easy to detect.

Is a kangaroo kick fatal?

A kangaroo kick can be fatal. This is because the damage that can be inflicted could easily result in death for an animal or even a human. In many cases, a human may get away with a serious injury but a fatality is a serious possibility.

This is only applicable to kangaroos. A cat doing a kangaroo (click here if its sitting like one) kick is not even close to this risk. And would not be expected to be fatal if inflicted on a human or animal.