Why Does My Cat Hiss At His Toy?

If your cat is hissing at its toy then you may be concerned or worried. This may lead to wondering why it’s happening and what you should do…

Why Does My Cat Hiss At His Toy?

Cats don’t like change, especially when they’ve only recently come to a new home. This new toy looks and smells different and so it may take them a little while to get used to it. A little catnip might help and also, consider the shape of the toy.

Give your cat a little time and if the catnip doesn’t help, consider changing to a ‘tried and true’ toy such as a small rubber ball (too big to swallow only), some hanging strings, or a simple laser pointer. Cats can be picky, but these are toys that are largely considered to be ‘kitty approved’.

Contents show
1 Why Does My Cat Hiss At His Toy?
2 Is it normal for cats to hiss while playing with toys?
3 Why do cats hiss?
4 What should I do when I see my cat hissing at its toy?
5 How do I prevent my cat hissing at its toy?
6 Why does my cat sometimes hiss when playing?
7 Can cats get possessive over toys?
8 How do I fix my cat’s toy aggression?
9 Should I hiss back at my cat?
10 How do you tell if cats are playing or being aggressive?

Is it normal for cats to hiss while playing with toys? 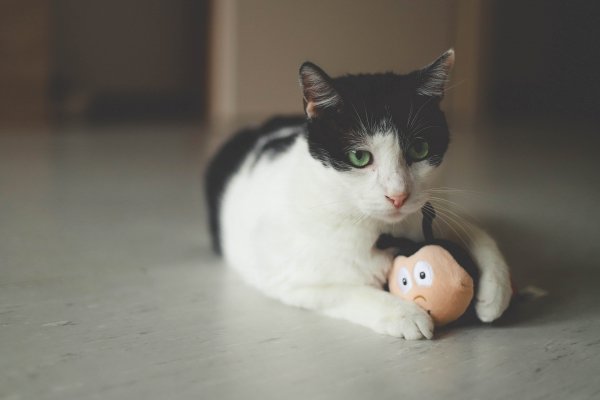 A white and black cat lying on the floor with a toy.

Some cats work themselves up into a frenzy with toys and when this happens, it is best to give them their space. For all their fluff and sweetness, cats are still little predators, and sometimes playtime can turn into ‘predator practice’ where your cat becomes wildly focused on testing out their skills.

Touching your cat during this time is not advised, as it might well get you scratched or even bitten before your cat realizes what they are doing. Signs that the aggression has gone overboard can include growling, hissing, tautness of the body, and especially, flattened ears.

If you see one or more of these, give your furball a little space and time to calm down before you touch them.

Why do cats hiss?

Cats hiss to express things such as fear, displeasure, prowess, or even just as a simple warning that they are NOT to be trifled with at this time. Sometimes this sound will arise during simple play and if you are playing with the cat, it’s best to immediately stop.

Hissing at you might indicate that your cat has gone from ‘play’ to ‘aggression’ and they might be irritated with something that you’ve done. Give your cat a little space and consider simply leaving the room if they seem overly aggressive.

Stopping play like this signals to them that playtime is over when they get too aggressive and consistently doing this will teach them, over time, that rough play will result in no play. It will also have the bonus of saving you from a nasty scratch!

What should I do when I see my cat hissing at its toy?

When your cat starts hissing at their toy, the best response is to simply keep your distance. Cats can wind themselves up into an almost ‘berserk’ frenzy and when this happens, trying to move the toy or touch your cat may result in aggression towards you in the form of claws or teeth.

Your cat isn’t trying to hurt you when they do this, at least not intentionally – they are simply so focused on practicing aggression with their toy that they will strike anything within close proximity. Just let your cat play and they will tire themselves out with a little time.

Don’t worry – this is completely normal behavior for predators – your cat is just practicing their hunting and fighting skills on the toy.

How do I prevent my cat hissing at its toy?

The odds are that you won’t be able to stop them from hissing at it, unless you catch them when the hissing first starts. At this point, if you can safely move the toy, then you might be able to diffuse the situation.

The problem is that this is not always feasible and once your cat has worked themselves up to hissing, there’s really not much that you can do but let them work this out. As a preventative measure, you can try simply putting away this toy when they are done and replacing it with another.

The toy that your cat is hissing at may well remind them of something else that they have bad associations with, and if you believe that to be the case then simply replacing the ‘problem toy’ is generally going to be the best option.

Why does my cat sometimes hiss when playing?

Usually, a hiss means that a cat is getting ‘fed up’ with a person, animal, or a toy. When you hear a hiss while you are playing with your cat, then this means that it is time to ‘back off’ from the cat and give them some space.

While some cats love playtime and petting, not all of them have the same patience levels, and this can result in a cat getting frustrated and feeling like you are directing aggression at them. Most cats respond to aggression with their own aggression, so forcing your cat to keep playing is a recipe for disaster.

Give your kitty some space if you are playing with them and if a dog or another cat is the focus of the hissing, then it’s best to separate them before it can escalate into fighting. Pop on some gloves – just to be on the safe side – and defuse the issue as quickly as you can.

Cats don’t hiss at random, so it’s best to take notice when they do it.

Can cats get possessive over toys? 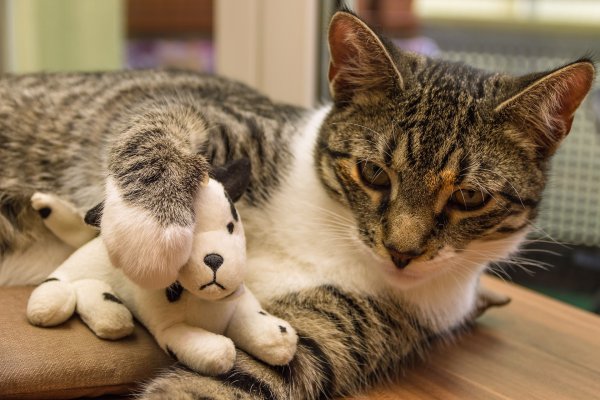 A white and gray cat lying while playing with a cat toy.

Yes, cats are very territorial and aggressive about it. They are hardwired to claim territories and the resources on them and to defend these claims. For domestic kitties, that can translate out as being possessive of their food bowl, bed, and toys.

If you have two cats or a cat and a dog, it might be best to simply get two or more of each toy, in order to help prevent competition. This can help reduce the chances of arguments over one favored toy if you just happen to have an overly territorial cat.

How do I fix my cat’s toy aggression?

If your cat is aggressive with toys then the best strategies for helping this are got to be ‘toy rotation’ and ‘distraction. With toy rotation, you simply put away the current toys and replace them with different ones or new ones with regularity.

Every few days or once a week should help, as they will get less attached to specific toys this way, at least in most cases. Barring this, distraction always works a treat. ‘Super bounce’ rubber balls, too big to swallow, can be tossed and will cause your cat to drop what they are doing and chase the ball.

Laser pointers are also quite effective, especially if you are trying to get your cat to ‘share’ a toy with another animal. The cat will see the red pointer dot, chase it, and this will free up the toy for another animal.

Just be sure to keep the cat distracted for a little while, otherwise they might just walk over to take the favorite toy back!

Should I hiss back at my cat?

No, you shouldn’t hiss back at your cat. If you do, then this is ‘kitty language’ for aggression, and you are basically asking for a fight! At the very least, it will stress your cat, so it’s not going to achieve any sort of desirable result.

When your cat hisses, one thing that you CAN do is try saying calmly ‘no’ and tossing over a treat in an attempt to diffuse your cat’s sour mood. Sometimes little ‘peace offerings’ like this will do the trick nicely and your kitty will ‘forgive’ you for the perceived slight and calm their attitude.

How do you tell if cats are playing or being aggressive?

Some of the signs of playing will be very close to aggression, so a large part of telling the difference is going to be getting to know your cat. Common playtime ‘faux aggression’ may include tail wagging, sharply back and forth, a tense body, and even the occasional hiss.

When it starts turning into aggression, however, your cat will get even more vocal and it will seem that all of their focus has transferred into a small ‘aggression bubble’ of area.

When this happens, you can try tossing a treat over to see if it will calm your cat and break them out of this, but in most cases it will be best to leave them alone to calm them down or to physically separate them from the other animal if this aggression seems to be directed at them.