Why Does My Cat Have Udders?

If your cat appears to have udders, like a cow, you may be confused and wondering why, and if this is normal…

Why does my cat have udders?

Often after your vet has to shave the cat, you’ll notice the appearance of udders, but don’t be alarmed! What you are seeing is a connective tissue known as the ‘linea alba’ and it’s quite normal in humans, cats, and many other animals.

So, now you know. But, what could cause this? Do male cats have this? What are cat udders actually called? Keep reading for these answers, and much more…

Contents show
1 Why does my cat have udders?
2 What are udders?
3 What could cause your cat to look like it has udders?
4 Do male cats have udders?
5 What are cat udders called?
6 How many udders (nipples) does a cat have?
7 What does it mean when a cat has nipples?
8 Why does my cat have enlarged nipples?
9 Can you tell how many kittens a cat will have by its nipples?
10 What Color should a cat’s nipples be?
11 Do cats give milk to their kittens? 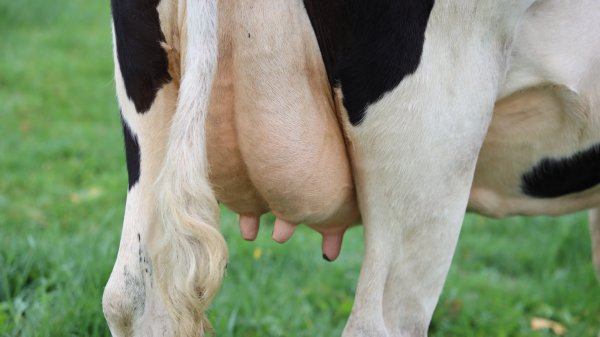 Udders of a cow.

Udders are simply large mammary glands, which occur in animals such as goats, sheep, and cows, contain two or more teats, and are visibly hanging between the legs of the animal. Despite the common misconception – cats do NOT have udders. Cats have simply the teats.

The teats are the protrusions from the mammary glands where milk may be secreted or expressed. While female cats and other mammals may certainly produce milk, they do not need to produce it in the volume that larger animals such as horses (Click here if your cat is in your horse hay), cows, and goats require and so they simply lack the udders possessed by those animals.

What could cause your cat to look like it has udders?

If it is quite prominent then your cat may be a bit overweight, so you might want to check with the vet and adjust their diet accordingly before this can become a health issue.

Do male cats have udders?

While male cats do not have udders, they do have nipples. This is actually common in most mammals and cats are much the same. The males will have nipples, which are extensions of their mammary glands, but these nipples do not have the ability to produce milk.

With wild cats, the male might well go out and catch small animals to bring them back and help to feed growing kittens, but milk is simply not going to be part of that equation. That’s going to be the sole responsibility of the mother.

What are cat udders called?

Despite the appearance of ‘udders’ on a cat, what you are actually seeing is ‘teats’ or in more common terms, ‘nipples’. While overweight cats may show udder-like protrusions, these are simply collections of fat on the Linea alba that are mostly unnoticed until your cat has had a haircut or is starting to gain too much weight.

The linea alba is common in many animals, humans included, and it’s basically a fibrous line on the anterior wall of the abdomen. So, in a nutshell, those ‘udders’ would be more accurately described by simply calling them ‘ab fat’.

How many udders (nipples) does a cat have?

While the number may sometimes vary, cats are generally going to have 6 – 8 nipples. This applies to both genders, but as the mammary glands on the males are going to be much less pronounced, their nipples are going to be harder to find than they would be with the milk-producing females.

What does it mean when a cat has nipples? 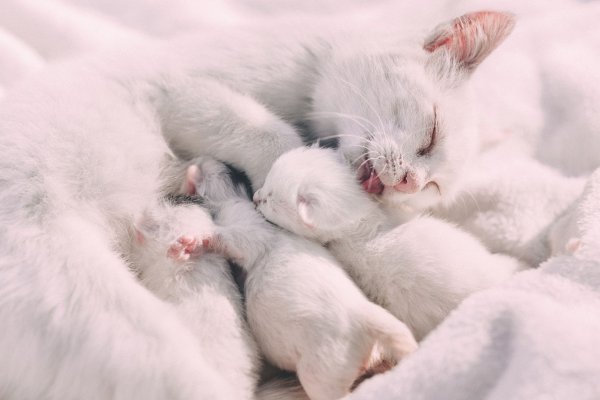 A white cat and it’s kitten.

Nipples are at their most pronounced when your cat is pregnant or in heat. During this time, they become much more enlarged and so while you might not have noticed them before, they will be quite apparent now.

You’ll notice quite a range in behavioral changes at this time, as well, such as changes in the female walking gait, a raised bottom, and tail, and your cat will generally become quite vocal. If pregnant, your cat will also start eating more at her meals, so if you are seeing all of these signs then you might want to prepare for the arrival of kittens!

Why does my cat have enlarged nipples?

Enlarged nipples do sometimes occur when your cat is in heat, but they are always going to be present when your cat is pregnant. This is natural, of course, as your cat’s body is just getting prepared to feed the coming litter of kittens.

Spaying is something to consider if you want to avoid any ‘surprise kittens’ in the future and it can also give a few health boosts to your cat. Spaying your cat helps to reduce chances of uterine infections and also of breast cancer, and of course, it will help to avoid those ‘mood swings’ and the vocal behavior that arrives when your cat is in heat!

Can you tell how many kittens a cat will have by its nipples?

No. Despite this common misconception, a cat is not going to lose or gain a nipple in anticipation of an upcoming litter of kittens. Both male and female cats will normally have 6 – 8 nipples, so the number of these will not help you to determine either a kitten’s gender or how many kittens a pregnant mother is going to have.

That said, certain health conditions may result in enlarged mammary glands, so if you are seeing some reddening or obvious discomfort in your pregnant cat then a vet visit is a good idea, just to ensure that everything is okay.

What Color should a cat’s nipples be?

Normally a cat’s nipples are going to be hard to see, but when you do notice them, they will simply be small and pink. When your cat is pregnant, the nipples will be larger and plump up a bit in preparation for feeding the kittens, and during this time they will likely become a bit brighter in their coloration than before.

If you notice plumpness but you do not believe that your cat is pregnant, then this may be an early warning sign of a cyst or an indicator that a condition such as mastitis or even breast cancer is present, so be sure to check with your vet if you are seeing these or other abnormalities around your cat’s nipples.

You can also check by touch to see if your cat is experiencing soreness in the nipples if you suspect a problem. If your cat gives any indication that this is painful then an immediate vet visit is definitely in order.

Do cats give milk to their kittens?

Yes! While the male cats cannot produce milk, female cats definitely can and do produce milk to nurse their kittens. While they will generally produce enough milk for all of their kittens, if your cat has a very large litter then you might want to consider making some changes to their diet to help to ensure that they have proper nutrition with which to nurse them.

Your vet can help you to create a better diet, but the basic gist of what your cat needs at this time is going to be plenty of fats and proteins so that her body has what it needs to keep up with all of those hungry kittens.

Normally, the mother cat should be able to produce enough milk for her litter and milk production will generally occur for a period of about 10 weeks before she starts to ‘dry up’. At this point, kittens may still attempt to nurse but you will notice that the mother has started to become more aggressive in pushing them away.

While this seems cruel, kittens are actually prepared to start eating solid foods at around 3 to 4 weeks of age – so don’t worry about mom’s behavior! She’s actually been quite kind and supportive to her little ones and a bit of pampering from you – along with some well-deserved rest — is definitely now in order!