Why Does My Cat Go Behind The TV?

If your cat is constantly going behind the TV then you may be wondering why this keeps happening, and what you can do about it…

Why Does My Cat Go Behind The TV?

Likely it’s a combination of the privacy and all of the fun back there. Cats love wires and when they know that they aren’t allowed to go somewhere, then it’s in a cat’s nature to simply do it anyway. There are some things that you can do, such as securing your wires neatly together if concealment is not practical.

So, now you know. But, is it dangerous for your cat? How can you prevent your cat from going behind the TV? Why does my cat go behind there and meow? Keep reading for these answers, and much more…

Is it dangerous for a cat behind the TV? 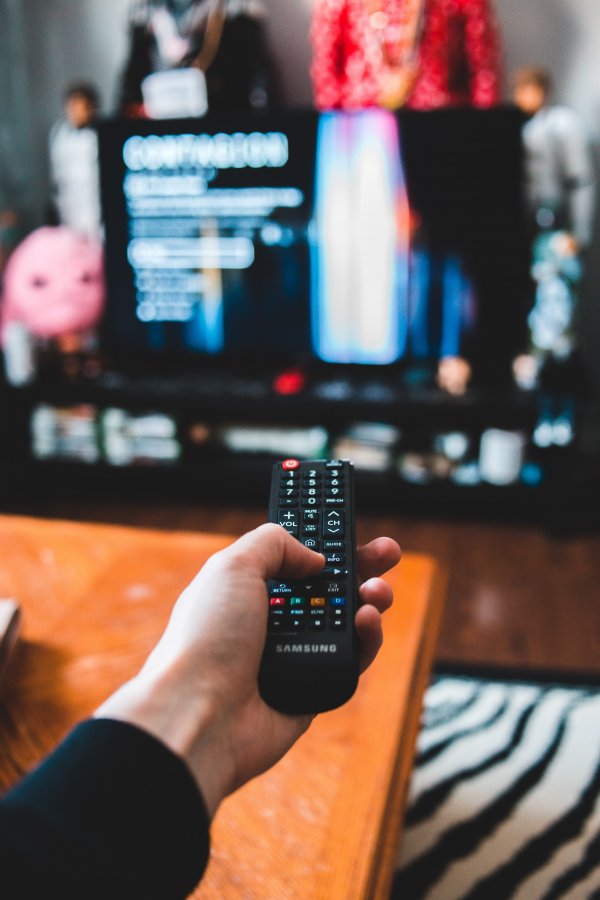 There is always a chance that your cat could pull something down, so it’s best to minimize the potential dangers behind your television. Zip ties are cheap and an easy way to do this, allowing you to bundle cords together in bigger groups that will be less tempting to bat at for a playful kitty.

As long as your cat isn’t chewing at the cables, then it’s likely that they just enjoy the privacy of their new hiding place. Just be sure to organize it a little to keep things safe and everything should be fine.

How can you prevent your cat from going behind the TV?

The best defense for getting cats to do anything is always distraction. Toys can help to keep them occupied and they might get bored of going behind the TV and then stop. If not, scent repellents work well with cats.

Cats are actually very scent-oriented and if they don’t like how it smells back there, then they will likely leave it alone. You can also use double-sided tape, as many cats don’t like how the sticky tape feels on their paws.

Some ‘cat repellent’ citrus-type scents can also help. Most likely those cables behind your TV just look like a lot of fun, so new toys for your bored kitty should also be considered.

Why does my cat go behind the TV and meow?

When your cat does this then it is a sign of insecurity or stress. They want your attention and you are giving it all to the television, so they’ve got a thing or two to ‘say’ about it. Cats get vocal when they are stressed, so if your cat is doing this then they are definitely trying to get your attention.

See if they will respond well to a little playtime or petting and most likely the extra attention will calm your cat down and make them feel a little more relaxed.

If you’ve just gotten a new animal, then your cat is likely showing you that they are stressed, and installing a ‘baby gate’ in one of the room doors might also help. That way your cat has somewhere safer to go than behind the TV so that they can get a little space from the new animal.

Finally, you can try simply turning off the TV. If your cat stops meowing when you do, then they are definitely asking for attention.

Could my cat topple over my TV on a stand?

If your TV stand is a little on the precarious side, it is definitely possible that your cat could knock it down. Cats have very strong legs and while it is unlikely to occur, a missed jump and a shaky stand could be quite dangerous for your cat.

Be sure to invest in a solid stand and to bundle all of your cords and you can minimize the chances of your cat getting into trouble – especially if you also have a dog in the house. Roughhousing can easily get out of hand and these tiny animals are often stronger than you think, so if you are worried it is best to err on the side of safety!

Why does my cat go back behind the TV when I move it?

Your cat is curious to see what you are doing and that spot just happens to have the best view. While it’s harmless, if you want to discourage your cat from doing this then laying out a little double-sided tape can do the trick nicely.

Cats don’t like the feel of it on their paws and will generally stop going to a place that you’ve taped after 2 or 3 times of stepping on it. Just be sure to be patient with the process and after a few times of stepping on the tape then most cats will be discouraged enough to start avoiding it.

Why does my cat jump on my TV? 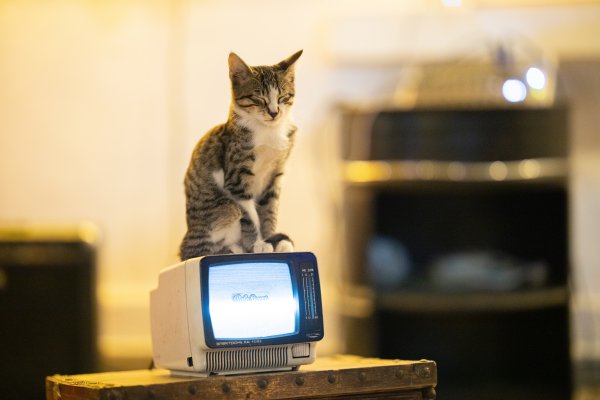 Cat standing on top of a TV set.

Oftentimes your cat is doing this because the TV is the easiest way to get somewhere that they want to go. If there is a nearby countertop that your cat likes to go to then this is the likeliest case.

You can reduce the temptation by getting a ‘kitty tower’ that gives them easy access to the space that they are trying to get to and this should keep TV excursions to a minimal.

If not, then it might be time to try a little tape on top of the TV and this should discourage them enough to find another route to get to the counter!

Why should you NOT spray your cat with water behind the TV?

While cats hate water, spraying it behind the TV is definitely not a good idea. With all of the cables, it’s a fire-hazard, and at the very least your upset cat is likely to jump and may harm themselves by knocking things over.

Could my cat bite the TV wires behind it?

Some cats will chew cables and this is something that you’ll want to discourage. Aside from double-sided tape and scent repellents, you’ll need to make sure that you aren’t encouraging the behavior. If you get up suddenly and yell, for instance, then it can become like a game for your cat and they’ll do it just to get your attention!

Bundle and conceal the electronics cords as well as you can and try the double-sided tape to discourage your cat playing there. If this doesn’t work, you may try distracting them with a laser pointer or other new toys and they may just lose interest in the space behind the television.

If there is a chance of anything being knocked over, moving the television may be a good idea to avoid any accidents.

Could orange peel repel a cat from behind the TV?

Some cats don’t like the smell of citrus, so you could try commercial citrus repellents for cats or simply leaving out some orange peels in a cup. The efficacy of this method will depend on your cat, however, and you’ll probably need to try a few different strategies before you can get them to stop going behind the TV (Click here if you see pee there).

If the scent doesn’t help, double-sided tape almost always does the trick, but keep in mind that it might take a few days before they are discouraged enough from stepping on it.