Why Does My Cat Gallop? (Should I Be Worried?)

Why does my cat gallop?

Your cat may gallop to practice its hunting and when playing. All cat movements center on their ability to hunt. Because they’re carnivores, they require flexibility, agility, and speed to attack and pounce on prey.  They also need the ability to defend themselves in situations against other and bigger animals.

So, now you know. But, isn’t this movement usually done by horses? What if it is galloping sideways? is there anything you can do if it’s happening at night? Keep reading for these answers, and much more…

Contents show
1 Why does my cat gallop?
2 What is galloping?
3 Is galloping usually done by horses?
4 Is Galloping the only movement of cats?
5 Is a gallop faster than a canter?
6 Do some cats gallop as a form of play?
7 Why does my cat gallop sideways?
8 Can kittens gallop as well?
9 Should you discipline your cat for galloping?
10 What can you do if your cat is galloping at night?
11 What is a gallop heart rhythm in cats? 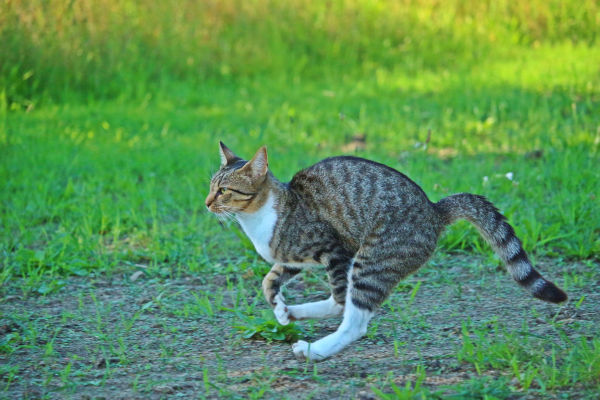 A cat jumping and galloping on some grass.

Galloping is a fast pace at which an animal moves. It’s fast with longer strides and has a particular rhythm to it. Generally speaking, the diagonal legs create two beats followed by the other corresponding pair of two beats, resulting in a gait with four beats.

The hind inside leg strikes first and then the outside. It’s the presence of the fourth beat that defines the gallop and cats will literally sound like little horses. This is because their hind legs are longer than their front ones, which propels them forward with the option of galloping.

Is galloping usually done by horses?

Galloping is synonymous with horses. But, almost any four-legged animal can gallop so long as their hind legs are longer than their front ones. This means furry friends like dogs, goats, sheep, donkeys, pigs, and even cats, have the potential to gallop.

Is Galloping the only movement of cats?

Believe it or not, your cat has a plethora of ways in which it moves, galloping is one of these. They can shift from a slinky strut to a burst of speed to a playful gallop to a sensual, slow gait. Recognizing your cat’s moves will be the key to understanding its behaviors, emotions, and sometimes, health.

Their physical design, including the arrangement of legs, paws, spine, and claws contribute to their galloping.

Is a gallop faster than a canter?

Galloping is faster than a canter. A Canter is one step below a gallop, but a little faster than a trot. To give an idea of speed, the gallop has a 4-beat rhythm, whereas a canter has a 3-beat rhythm.

This means each paw-fall is the grounding phase of a leg. These paw-falls have even spacing and are followed by the suspension phase of a gait. This is when all four paws are off the ground. The three beats and suspension comprise one stride.

Do some cats gallop as a form of play? 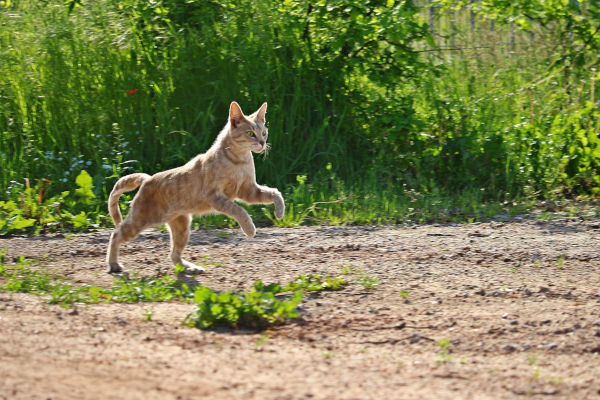 A cat jumping and galloping.

Many cats gallop and canter as they play. It’s fun and gives a different texture to their gait, which can make for a good time when playing with toys, children, and other animals. They also do this when undergoing their predatory and defensive duties. So, it’s quite normal for cats to gallop as a regular part of their daily lives.

Why does my cat gallop sideways?

Often, when your cat gallops sideways it means they’re in an affectionate, playful mode but they could also use it as a form of intimidation while hunting or being defensive. This display is more likely from a kitten than a cat, but adult cats will do it too. There are a few reasons why a cat may gallop sideways:

Can kittens gallop as well?

Kittens can gallop, though they may not be able to do this as well as an adult cat. In fact, it may be clumsy and cute when they first do it. But yes, they do. It’s a means of early training for their adult behaviors and galloping is one such behavior. They often do this when there’s enough room to move around.

Should you discipline your cat for galloping?

Don’t punish or discipline your cat for galloping. It’s part of their nature and who they are. If your cat gallops in a bothersome way, then you’ll have to train your cat with positive reinforcement.

What can you do if your cat is galloping at night?

If your kitty sounds like a horse or an elephant through the house at night, and its preventing people from getting sleep, there are a few things you can do:

What is a gallop heart rhythm in cats?

If your cat’s heart is beating in a galloping rhythm, take it to the vet because it’s likely a symptom of heart disease. A galloping heartbeat sounds like a four-beat gallop rather than a two-beat that indicates healthy normality.

This could be the result of cardiomyopathy, hyperthyroidism, or something more. Only the vet will have the tests and equipment necessary to find out for sure.