Why Does My Cat Fight Her Kittens? (Deceptive Mind?)

Why does my cat fight her kittens?

Mother cats may appear to fight their kittens because they can get frustrated with them from time to time. This is because they get in her way, antagonize, or even bite her. Therefore you may see her push, swat, or handle them aggressively to pull them in line.

So, now you know, But, how do you stop kittens fighting? Could a cat kill another cat? What are the signs to confirm a mother cat is rejecting some of her kittens? Keep reading for these answers, and much more…

How do I stop my kittens and cats from fighting? 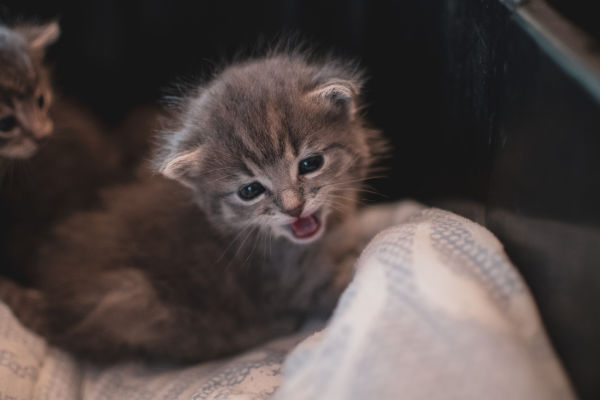 To stop your cat and kitten’s fight you need to first calm down the mother cat. However, it is important not to try and touch or physically calm her down because she could switch her focus of aggression towards you. Therefore, be patient, and reward your cat when she follows your desired action.

This may seem counterproductive, but it is often more productive than trying to negatively discipline her. This approach only tends to get them more aggressive and resent you. Trying to get your cat to do what you say using positive methods is proven to get good results.

Should I intervene when my cats fight?

You should never intervene when two cats are fighting. You may feel compelled to take immediate action and split them up, but this often makes matter worse. You may find they get more aggressive, or one of the cats may direct their aggression towards you.

There are a couple of things that can do instead of intervening:

If the two cats are rolling around it’s dangerous to get involved so you can use distraction to make them naturally lose focus on the fighting. This can be as simple as making a loud noise, turning on a bright light, or closing a door firmly.

Another option is to wait till they stop it then request that your cat calms down. Then when it does reward it for being calm. Then, the aim is to train it to calm down on demand, in the hope that it will expect to be rewarding for compiling with your order. Admittedly, this may take some work to implement, so do not expect overnight success with it.

How do you punish a cat for attacking another cat?

To punish a cat for attacking another cat you should separate them. This is after the attack, not during, to stay safe. Meaning, in the aftermath, move them into separate locations and do not allow them to communicate with each other.

It is important not to use any negative methods like shouting, grabbing, or anything related to those actions. Just simply keep them separated and give them some time. The hope is with some time separated they will act better.

When you do re-introduce them it is important to not to put them together without monitoring them to see how they will respond. If it’s immediately hostile again, they need more time.

Can a cat kill another cat? 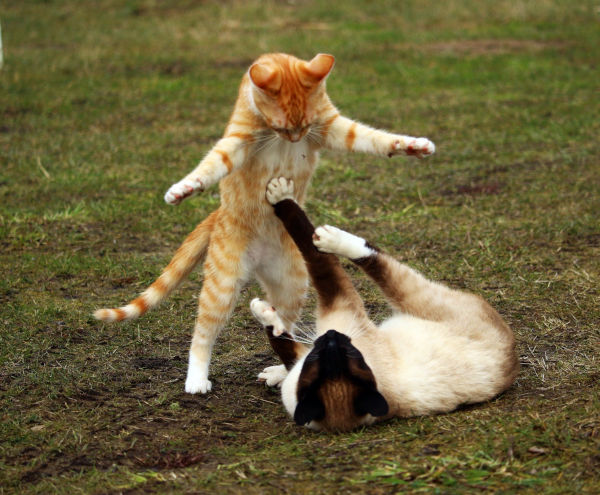 A cat is unlikely to kill another cat when they fight. The fight may seem vicious or quite frightening but this is not usually a fight till death. However, the fight can get out of hand and end in an accidental death. This could mean injuries sustained that lead to death after the fight.

However, it is more likely one cat will be injured but walk away from the fight. Cats do not have that same killer instinct for each other as other animals might have. However, this does not mean that they should be left to fight because there is no fear of death.

Is it normal for kittens to fight each other?

It is normal for cats, or kittens, to play fight each other. However, sometimes it may look like they are fighting but in reality, they are just playing. If you are unsure if it’s a real fight or just a game you will need to look and see how the cat reacts, meaning their body language.

Are they taking it in turns? If yes, this may be a good indication that they mean no harm and just want to play with each other. If not, it could indicate a real problem that may need your assistance.

Can a mother cat hurt her kittens by carrying them?

It is unlikely that a mother cat will hurt its kittens when it is carrying them. It may seem aggressive at times or even see the kittens showing resistance but this is just the way they are. The mother cat is likely to deal with this by grabbing by their scruff and handling them.

The mother cat knows how far to go and is unlikely to sink her teeth into the kittens, just holding them with the appropriate pressure to keep a grip and not hurt them. This is an instinct and has been proved to be reliable.

How do you know if your mother cat is rejecting her kittens?

To know if your mother cat is rejecting her kittens you need to look at how she is treating them. Meaning, is she refusing one, or more kitten’s food from her breast? Is she hissing at any of them? Or, segregating one or two of them? If yes to any of these it could be a sign of rejection.

If you fear this is happening you may need to intervene to save the kittens. But, before you do so check in with your ve for their preferred method so you do not antagonize the cat or put the kitten in danger.

Is it normal for a mother cat to sit on her kittens?

It is not normal for a mother cat to sit on her kittens. If you see this happening it could be for a couple of reasons. Such as the mother cat is inexperienced and not doing things correctly. Or she is unhappy with her environment in some way.

If it is any of these, or you are genuinely concerned about the kittens it may be best to speak to your vet on their preferred method to keep the mother cat happy and kittens safe.

What to feed a cat that just had kittens?

It is important to offer a cat that just had kittens a balanced and quality diet. make sure she has plenty of wet, and dry cat food. Also, make sure she is well hydrated with enough water. The wet food should help with this though, but extra water can help.

If you are struggling to feed your cat the wet food, then you can try some other nutritional offerings such as some tuna in a can, salmon fish, or even cooked chicken.