Why Does My Cat Dance? (3 Odd Triggers)

If you have seen your cat dance you may be rubbing your eyes with dis-belief. But, why does this even happen?

Why Does My Cat Dance?

There are several reasons your cat may dance, or prance around. It’s possible your cat is excited or startled, that she wants to play, or has been influenced by a deep whiff of catnip. Or she could be exhibiting signs of aggression.

So, now you know. But, can you teach a cat to dance? What are the things that can trigger a cat to dance like this? Will cats respond to you dancing? Keep reading for these answers, and much more…

Can I Teach My Cat To Dance? 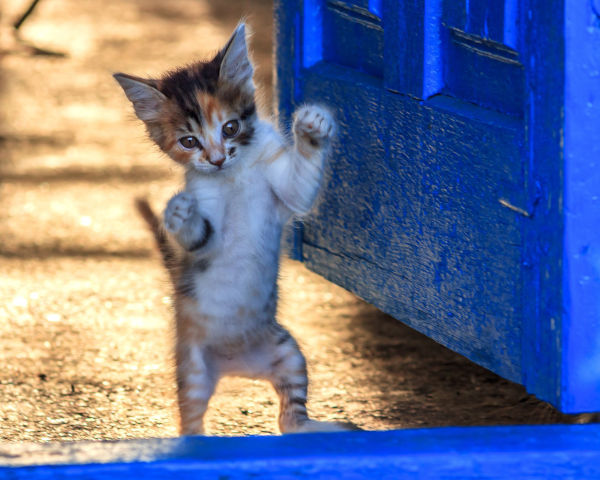 A cat standing on its back legs like it’s dancing.

You can teach a cat to dance. But, teaching your cat to dance is not the same as teaching a dog to do tricks. Most cats don’t innately respond to attempts to train them to a certain showy behavior.

But, don’t despair, you may still be able to condition your cat to participate in dance sessions with you. If your cat loves to express herself physically or is already a show-off, you have a good chance of getting her to go along with you when you encourage her to dance.

How Do You Train Your Cat To Dance?

Does she love to sit on the edge of the counter and wave her paws at you for attention? Turn on some music and move to it along with your furry friend.

Using a toy wand and dangling an enticing bunch of feathers or other delights in front of your kitty while the music is playing is another way to lure her to dance with you.

If your kitty likes to be held, you could cuddle her in your arms while you move to the music. Glide and spin around the room with your fuzzy dance partner and have fun! Just make sure you pay attention to her body language so you can let her down if she doesn’t like the game.

Can Cats Dance To Music? 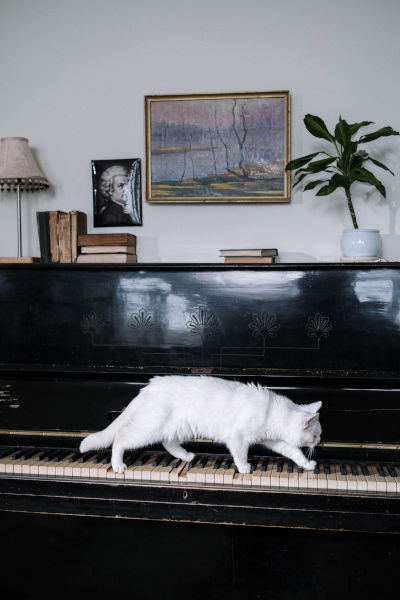 A white cat on a piano.

Most cats don’t seem to respond to the rhythms and sounds of music made for humans, although some cats may like classical music or other very soothing music.

A search for “cats dancing to music” will turn up compilations of cats doing their thing: rolling around after smelling catnip, arching their backs and standing on their toes when startled, standing up to intimidate another cat, playing with toys, and so on, with appropriate music dubbed onto the videos.

What Is The Cat “Butt” Dance?

The cat “Butt” dance is a weird type of butt wiggle. The cat will crouch down with her head close to the ground, eyes fixed intently on the subject of interest. A little head bob to ascertain distance to the target, then the hind paws shift back and forth and the giggle-inducing butt wiggle begins.

Theories are many as to the purpose of the cat butt dance.  One of the most widely accepted theories is that cats are testing their footing before shoving off with both hind feet into a pounce or dash. They are making sure their footing is firm and their balance is set to ensure a successful leap.

They may also be warming up their muscles before the strenuous movement, much like an athlete warming up.

What Can Cause A Cat To Dance?

There are several things that can cause a cat to dance. Here are some examples for you:

Your cat may be excited about many things. Maybe she prances around your legs to express her happiness when you get home from work or does a little dance (what about gyrating? click here) of anticipation on the kitchen floor when you open a can of some yummy food.

Pulling out the feather wand or squeaky mouse toy may elicit some exciting prancing and dancing, expressing a desire to play.

If your kitty is one of the 70 to 80 percent of cats who respond to the intoxicating effects of catnip you’ve probably seen some exciting behavior after your pet has contact with this little herb.

This reaction lasts only about 10 minutes and then your cat will be immune to the effects of the smell of catnip for about half an hour.

Your cat may rub herself all over the catnip or catnip-containing object. She may roll excitedly and do flips or run up and down the room. She may growl, meow, or sing. That is if she smells the catnip. Catnip’s volatile oils enter the cat’s nasal tissue and stimulate sensory neurons, causing the cat to react.

If your kitty eats the catnip it will have the opposite effect and cause her to become relaxed and sleepy.

A sudden noise or movement may startle your cat into a prancing posture. She may jump into the air then stand on tiptoe with her back arched and her head down.

This is a defensive posture which your cat will maintain until she has assessed the situation and decided there is no threat, or until she decides to run, hide, or attack.

Cats may appear to be dancing when they are expressing aggression toward one another or another animal. They may stand on their hind legs and prance back and forth in an attempt to intimidate the object of their displeasure.

Where Did The Dancing Cat Come From?

The dancing cat, or “vibing cat”, is a meme that took off in October 2020, shows a cat seeming to dance to the music of Bilal Göregen, a blind street musician from Turkey.

He is performing the Ievan Polka on the drum and a white cat, appearing to bob to the music, has been superimposed over the screen.

The video went viral and inspired many adaptations, including an especially popular version featuring cricketers dancing.

How Do You Make A Cat Dance?

It’s impossible to “make” your cat dance on her own. You can entice her to dance-like movements or hold her in your arms while you dance. See the suggestions above under “How Do You Teach My Cat to Dance?” for some ideas to entice your kitty to dance with you.

Will Cats Dance If You Dance First?

Your cat may mirror your movements if she is very outgoing and if she naturally likes to communicate with body movements. Try it out and see. Maybe she’ll enjoy bobbing around or waving her paws along to your dance moves.

Most cats don’t respond to music made for humans. The most reaction my own cats have ever shown is to stick their ears down and to the side to express their displeasure at the noise. But, it turns out, cats really like music that was composed with them in mind.

A study previously published in the journal Applied Animal Behavioral Science suggested that animals may respond well to “species-specific music that resembles the tempos and frequencies naturally used in their communications.”

The songs composed for cats by David Teie include a pulse related to purring and tones cats use in their vocal communications. Many cats seem to love this music made specifically for them, expressing their feelings by rubbing on the speakers, purring, and inclining their heads toward the sound.