Why Does My Cat Angry Meow? (Painstaking Message?)

Why does my cat angry meow?

Your cat will angry meow to project its feelings. And, then, it is trying to project an objection or unhappiness. An angry meow is similar to a normal one but is often louder, persistent, and more menacing. When you hear it the chances are you will appreciate the differences.

So, now you know. But, what exactly is an angry meow? Should I meow back at this? What things can trigger this meow? Keep reading for these answers, and much more…

What is an angry meow? 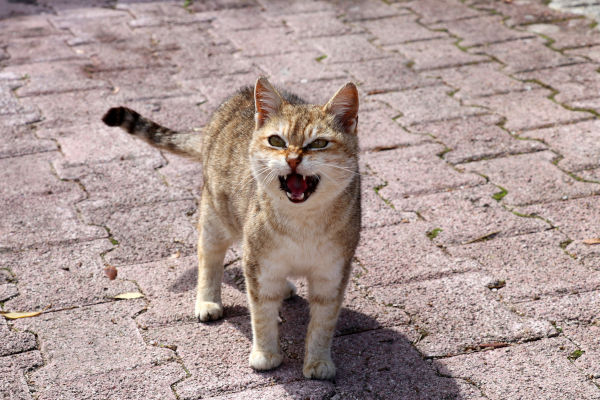 The Angry Meow sounds similar to a normal meow but it has a distinct loader sounder and more venom to it. It is the cat’s way to highlight its dislike for something so it instinctively makes it distinguishable from a normal meow to get its point across.

If you have ever annoyed your cat you will notice this distinctive meow and wondered what it was. Later I will explain some things that are known to anger a cat and make it inclined to use this angry meow.

3 things that could cause your cat to angry meow:

If you have heard your cat angry meow and wondering what sort of things can make this happen here are some examples to help you:

You may, or may not know that cat’s paws are quite sensitive, a bit like human feet, so if you persist in touching them when they have already shown they do not like it, this could trigger it to meow in this way.

Put it this way, has anyone ever tickled your feet, and you told them to stop, but they didn’t? They may feel it’s a great joke, but you didn’t? Well, it’s the same for a cat. So, they may meow angrily to tell you to back off.

If you ever make the mistake of waking up a cat you may see the wrong side of it. Meaning, they may snap at you and meow angrily. Surely, at some time in your life, either someone has woken you up and annoyed you, or you have done this to someone, right?

In some cases, you may interrupt its sleep and get more than an angry response it could easily give you a warning smack with its paw, or worse.

03. Not cleaning its litter box

Cats are naturally clean animals, meaning that they want to keep certain things tidy and in order one of these is their litter tray. They hate pooping or peeing in a dirty litter tray. If you acknowledged this but are struggling to keep on top of it, consider getting a self-cleaning litter box to help you (Click here to see the price, on Amazon #Ad).

Why does my cat react when I meow?

Some cats react when you meow because they know that this is their main communication method with you. Cats, kept domestically, rely on this method to get fed, let outside, litter tray changed, etc.

Therefore, when you meow, as weird as this may sound, they understand this is your way of trying to give them some feedback.

Should I meow back at my cat?

You can meow back at your cat, and it may even react, but it may not do much for you. Your cat expects an action from you when it meows, not a verbal response. So, the chances are you will just end up meowing back and forth with no gain.

So, the best cause of action is to listen to your cat meowing and understand what they need, for example, some food, then respond by feeding them, or delivering their request.

Obviously, they can’t get everything they wish. Why? For example, if we take food, they may just have been fed and acting greedy, so more food may not be the answer.

What does it mean when a cat meows a lot?

Cats may meow a lot for several reasons, for example, they may be in some serious pain, very hungry, or fearful. If it’s getting excessive there is a good chance that it feels the need is desperate, such as it being in excruciating pain.

If you fear that your cat has a real problem it’s not worth guessing, get it checked out as soon as possible, ideally from your vet. Even if it’s just to eliminate the chance of it being a health issue. This will allow you to see what else it could be without worrying the worse, such as it dies. 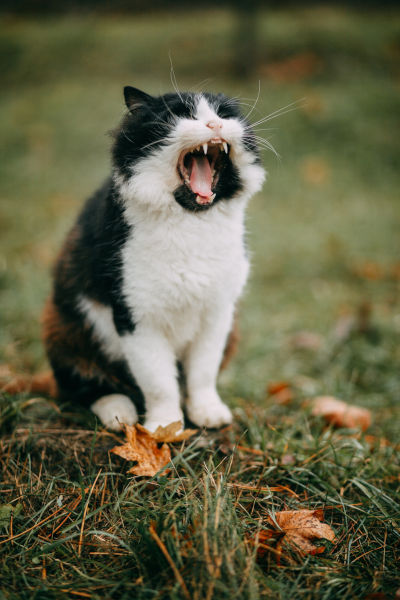 A cat with its mouth open.

Older cats are known to meow more. This is for several reasons. The most common ones are it being in pain, its senses fading over time, or just anxious about its lack of movement as it gets older. Therefore you may need to pay more close attention.

Another reason for giving it more attention is the chance of it getting injured increases because it is not as agile as it was when it was younger, and small injuries can take longer to heal. Which is similar to an aging human in that respect.

Could your cat angry meow if you don’t let it out?

Cats could easily angry meow to be let out. However, this is more likely when they feel that you have been ignoring their request. This is why many cat owners opt for a cat flap (Click here to see the reviews, on Amazon #Ad).

These cat flaps allow the cat the opportunity to let themselves in and out at their leisure. This is more convenient especially if you are on vacation, or work in an office all day, away from home.

Are angry meows louder than normal?

An angry cat meow is likely to be louder than normal. This is because your cat wants to make it clear that is not happy. If it was the normal volume it would just be overlooked as a normal meow. Once you hear it you will know for sure that it is different from the norm.

So, if you have ever wondered if you have ever heard this meow before, or you should expect a louder sound from it, now you know. Once you know, the key thing is learning how to avoid it and keep your cat happy.

Could a cat meow a lot because it’s lonely?

Cats can meow because they get lonely and anxious. This is likely to happen when they left while you are away for an extended vacation or work really long hours. Cats can survive on their own OK, but they do have a limit on this.

Many domesticated cats spend their weekdays alone because their owner works in the day, but when this absence goes over a longer period your cat could get frustrated, anxious, and meow a lot in response.