Why Does My Cat Sleep Under The Couch?

Why does my cat sleep under the couch?

For a new cat hiding under the couch makes them feel more secure, as it’s harder for anyone to sneak upon them, and with a little time and attention (and some treats wouldn’t hurt) they should start sleeping in locations that are a little more public.

On the other hand, with resident cats, that have been with you a while.  when they are feeling sick, will isolate themselves like this or even start trying to escape through the front door when you leave to go to work.

While we don’t fully understand why they isolate themselves when they feel very bad, this behavior is common enough in cats that you should bring them to your vet immediately – something is wrong and it’s likely with their health.

Contents show
1 Why does my cat sleep under the couch?
2 Is it safe for my cat to sleep under the couch?
3 What to do if a cat is hiding under a couch?
4 Where is the best place for a cat to sleep?
5 Should a cat have its bed?
6 How do I know if my cat is hiding?
7 Why is my kitten hiding under the sofa?
8 Do kittens outgrow sleeping under couches?
9 Why do cats lay under furniture?
10 How do you know if your cat is crying for help?

Is it safe for my cat to sleep under the couch? 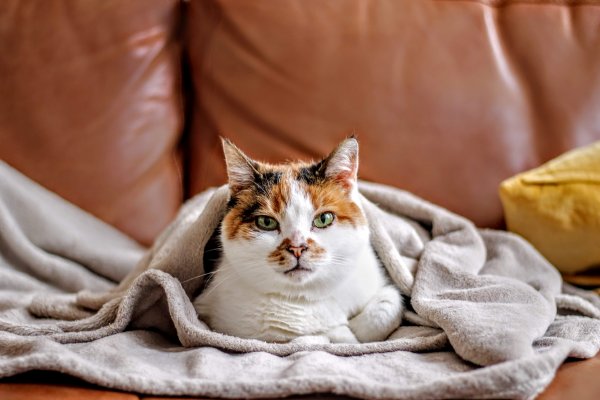 An adult cat nested on a blanket.

Yes, it should be safe for your kitty to sleep under the couch, provided that it’s firm enough that it won’t sag underneath if there is weight on it.

Many cats like to hide under the couch if there is enough space, with the underside of beds being a popular second choice, and this is something they do when they feel nervous or unwell and want to limit any contact with other pets or humans in the house.

What to do if a cat is hiding under a couch?

If your cat is hiding under the couch, then the best thing to do is to leave them alone about it – you don’t want to ‘force’ the issues. Cats hideout when they are worried, feeling poorly, or even if you’ve changed the environment a bit with some new furniture or an additional pet – cats hate change.

With stress or changes in their environment, hiding under the couch lets them reassess the environment until they feel more secure, though if you haven’t made any recent changes in the home you might want to consider a vet checkup if they don’t come out within a day or two and the behavior is new.

In the meantime, move their food and water where they can get it easily, and make sure that their litter box is close by so that they can ‘sneak out’ if they need a potty break.

In most cases, your cat should start coming back out as normal, but if they are ignoring their food and litter box then it’s likely a health issue and it’s time to get the vet involved.

Where is the best place for a cat to sleep?

Ideally, your cat should sleep with you, if you aren’t the type of sleeper that rolls around a lot at night. The second-best option is to put a cat bed or kitty tower close to your bed so that your cat can sleep close.

Keep in mind, however, that there is no guarantee that they will sleep there or if they do, that they will ALWAYS sleep there. As predators, cats are hardwired to rotate their sleeping spots and pick an average of ‘5 favorites’ around the house.

This makes sense when you think about it since sleeping in different spots makes them much harder to sneak upon. That said, if you don’t mind the company at night, preparing some spots close to you is always the best option. It helps your cat to feel safe and only serves to strengthen the bond that you share.

Should a cat have its bed?

Yes, your cat should have their own bed, otherwise, they are going to pick out spots that you may or may not approve of. Cats typically choose an average of 5 sleeping spots around the house, which they will sleep in on different nights or for naps during the day.

Adding a comfortable kitty bed helps you to earn one of those coveted spots so that your cat will be sleeping somewhere you like on occasion – be it close to your bed, next to the desk, or even in the living room while you watch some shows in each other’s company.

How do I know if my cat is hiding? 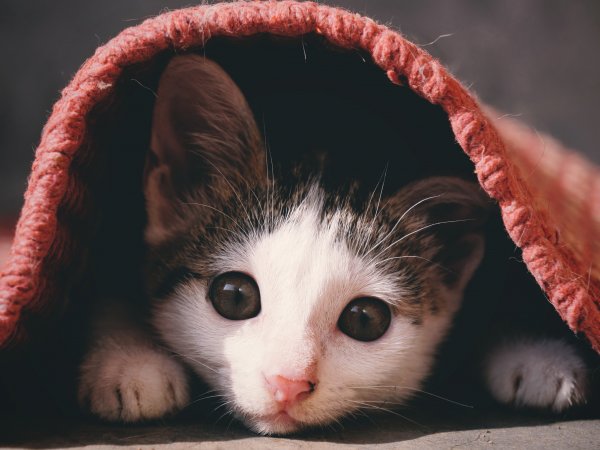 A black and white kitten under a red blanket.

You’ll know. While cats are pretty mysterious, they usually stay close to where their owner is, as they enjoy company just like humans do. If you are only seeing them when it’s feeding time, however, then your cat is stressed or not feeling their best and it’s time to investigate a little.

New people visiting the house can sometimes cause your kitty to hide because they don’t know or trust them yet, but usually, they should make an appearance again once they are sure that the people are gone to make their presence known.

A quick test is to throw a small rubber ball nearby where your hiding cat can see it and watch what they do. If they ignore a few throws or run out, get it, and then go back under the couch then your cat is hiding for one reason or another and you’ll need to look into the ‘why’ of it.

Why is my kitten hiding under the sofa?

Your kitten just feels unsafe and this is going to pass with time. You can speed things up a little by playing with your kitten, just don’t force it on them. Try to coax them out with a treat close to the edge of the sofa and another one just out of reach to see what your kitty does.

If they come out, try dragging a piece of yarn and most kittens will pounce on it happily. It’s going to take a little time, but with lots of love, play, and treats your cat will start to feel more comfortable interacting and they will learn the scents of the home.

Once this happens, your kitten will stop hiding – they just need to feel that they are safe in their new home.

Do kittens outgrow sleeping under couches?

Yes, most kittens will stop sleeping under the couch, though a few can take their time to do this. You can help by blocking off some areas, but don’t block all of them. Right now your kitten feels frightened by all of the new sights and smells of the house, and you want to let them adjust naturally.

If your kitten has been doing this for weeks now, however, then a new tactic might be to give them some covered sleeping spots, like a kitty bed with a top that you can put in a quiet corner or a kitty tower where they can hide and have a good vantage point of the room.

Your kitten will come around, but if they take their time then creating private spots for them is a nice compromise that can go a long way towards building up trust.

Why do cats lay under furniture?

The reason for this behavior is twofold. First off, cats are quite the little apex predators, and a secluded spot with a good view of the area lets them ‘stalk their prey’ or hideout when they feel nervous about what’s out there.

Secondly, it’s quite comfortable. Small spaces like that seem cramped to us, but cats love them, as they can curl up and the smaller volume of the space is easier to heat with their breath and body heat, so it’s not as uncomfortable as you might think!

How do you know if your cat is crying for help?

Get to know your cat and its physical mannerisms. With cats, body language cues are usually going to tell you the most. Flattened ears, for instance, especially with a swishing tail mean aggression, while a tensed-up body, head held low, and often with the eyes squinted or closed could mean that your cat feels ill.

The most noticeable cry for help, however, is hard to miss and it’s called ‘caterwauling’. This is one sound that all owners dread hearing because it means that your cat is hurt or very upset. Caterwauling is the sound that a cat makes that is best described as ‘screechy vocalization’.

If we had to describe it in a little more detail, think of when your cat ‘meows’ but leaves out the ‘w’ – prolonging the ‘raaaWWWr’ sound and hitting sharp and unpleasant notes in the drawn-out vocalization.

Cats only do this when they are hurt, scared, or about to introduce another animal to their claws and fangs, so if you hear this sound then you need to immediately locate your cat and assess the situation – cats don’t caterwaul for the fun of it and something serious is always afoot when you hear it.