Why Does My Cat Sit On My Other Cats Head? (Evil Intent?)

If your cat is sitting on your other cat’s head you may be shocked and left wondering why it would do this. And, what you can do about it…

Why Does My Cat Sit On My Other Cat’s Head?

When your cat takes a seat on top of your cat’s head then they are trying to assert their dominance over the other cat. This is normal behavior and there is no reason to intervene unless the situation escalates, and your cats begin to fight.

So, now you know. But, does my cat mean to hurt my other cat? How can I stop my cat from bullying? How do cats usually show their dominance? Keep reading for these answers, and much more…

Contents show
1 Why Does My Cat Sit On My Other Cat’s Head?
2 Does My Cat Mean to Hurt My Other Cat?
3 How Can I Stop My Cat from Bullying My Other Cat?
3.1 Positive Reinforcement
3.2 Re-introduce Your Cats
3.3 Get More Toys
3.4 Add More Territorial Space
3.5 Create a Safe Space
4 How Do Cats Show Dominance to Other Cats?
5 Why Does My Cat Lay So Close to My Head?
6 Why do Cats Tap Each Other’s Heads?
7 How Can I Tell If My Cat is Bullying the Other cat?
7.1 Behavioral Signs
7.2 Shy Cat
7.3 Territorial Signs
8 What is “Alpha Cat” Personality?
9 Why Do Cats Greet Each Other with Head Contact?

Does My Cat Mean to Hurt My Other Cat? 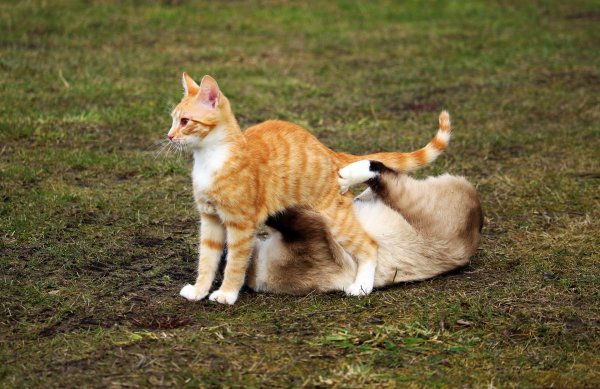 Most of the time, your cats are probably just playing with each other. If your cats are chasing each other around and swatting playfully, there should be nothing to worry about but if your cat starts bringing out the claws, you should intervene.

How Can I Stop My Cat from Bullying My Other Cat?

Not all behaviors are aggressive but if you are worried that your cat is a bully, you can address your fierce feline’s negative attitude by trying several intervention tactics.

The best way to take care of a misbehaving cat is to retrain them by implementing positive reinforcement. Influence your cat to act friendly by creating a peaceful environment and reward them with treats for their positive behavior.

If you just introduced your cats and they have had a rocky start, you might want to try re-introducing them. Try using scent to introduce one another instead of letting them roam freely. Implement this by separating them into different rooms and feeding them on the opposite sides of the door at the same time!

The amount of time it takes to adjust to a new housemate will vary from cat to cat.

If your cat is acting aggressively, that might mean that they are not getting enough entertainment. Buying them additional toys that you can keep lying around and ready to entertain them all day long is a great way to ensure they do not take out their aggression on your other cat.

It can be notably helpful if the toy is electronic like a floppy fish that will automatically move and flop around when your cat begins to play with it! This gives your over-stimulated cat the stimulation they need.

Cats fight when they do not have a territory of their own such as a personal litter box, their own scratcher, or their own toys so consider purchasing the number of cat toys and furniture you have around your home.

Because your cats rely heavily on a social hierarchy, increasing available territory will ensure that your cats do not have to compete over resources like food and litter boxes.

Spread out the locations of your cat trees and cat beds so your cats can have their own space and escape one another when they feel overwhelmed. If your cats do not get along it is especially important to give them a place of their own.

How Do Cats Show Dominance to Other Cats?

Cats will show dominance over other cats in several ways like hissing, intense staring, and growling among many other things. They may also pace or posture in front of resources like food and water to prevent the other cats from using them.

Stiffening of the ears, limbs, and tail are also other signs of a dominant cat. They will do this around other household members to show their size and strength capabilities.

Cats view the highest animal in the room as the alpha which is why they will find the highest point in the room so they can keep an eye on every person who comes and goes. There is no reason to worry about a cat who sits on its furry feline roommate.

Why Does My Cat Lay So Close to My Head?

Lying on their owner’s head is a sign of affection. This is their way of extending an olive branch to form a deeper connection and bond with you!

Furthermore, your head is the highest part of your body which means that the closer they are to your head, the more equal they feel.

Why do Cats Tap Each Other’s Heads?

Body language is not the only way cats communicate, they use tapping and batting as well to playfully express boredom or discontent.

They may also slap or hit each other because they are trying to defend themselves or attack another cat. To determine whether this is a negative or positive behavior, you should evaluate their body language.

How Can I Tell If My Cat is Bullying the Other cat?

Signs that your cat is a bully are not always obvious and typically the ‘alpha’ is not proud to take ownership of their unfriendly ways. Luckily, between behavioral and territorial shifts there are certain ways that you can pinpoint if your cat is being a bully.

Keys signs that your cat is bullying your other cat are growling, hissing, placing its tail between its legs, and stiffening its ears.

The cat that is being bullied tends to act shy towards the bully.

Shy or scared cats might be acting fearful because they are afraid of the bully that is continually harassing them. You can address this problem by trying some of the intervention methods like re-introducing your cats or increasing the available territory.

If one cat keeps the other away from food, water, toys, or other resources this is an indication that one cat is keeping territory. An obvious sign of this is potty problems. Finding cat feces or urine outside of the litterbox is a sign that one of your cats is marking the litter box as their territory and trying to keep it for themselves.

What is “Alpha Cat” Personality?

When it comes to cats, felines tend to be asocial with one another, and to function in a multiple-cat household, they rely on a strict social hierarchy; however, that is easier said than done and the battle for alpha cat –or top of the social pyramid- is constant.

The alpha cat is the most recognizable personality type in the cat kingdom. They are known because of their dominating and aggressive personalities. Furthermore, these cats may be ill-mannered and bully other cats in the household (chasing, swatting, biting, etc.).

Alpha cats may also be recognized because of their loving and loyal nature. Although they are typically aggressive, in a single-cat household their temperament might be more loving and they may demand constant attention from their owners.

Why Do Cats Greet Each Other with Head Contact?

Greeting each other with head contact is a sign of affection because cats release friendly pheromones from their cheek glands as they rub against each other. As they rub against things, they are releasing their scent and marking their territory. This is a very positive sign between the two cats!

Cats are asocial so they can become very aggressive and competitive with other cats for a variety of reasons.

Reasons that your cat might be acting aggressively toward your other cat include:

To guarantee that your cat does not become obsessively aggressive with your other cat, try to foster a peaceful environment and implement positive reinforcement for good behavior.