Why Does My Cat Hit Me With Her Paw? (Play or Pain?)

If your cat keeps hitting you with its paw you may be wondering why this keeps happening and what can be done about it….

Why Does My Cat Hit Me With Her Paw?

If your cat hits you with her paw, she’s most likely in a very playful mood or hungry. For the uninitiated cat enthusiasts, cat behaviors can seem erratic, going from slothful and uninterested to lightning crazy in the space of a second.

So, now you know. But, does your cat mean to hurt you? Why does it use its claws sometimes? Why would your cat slap you? Keep reading for these answers, and much more…

Does My Cat Mean To Hurt Me With Its Paw? 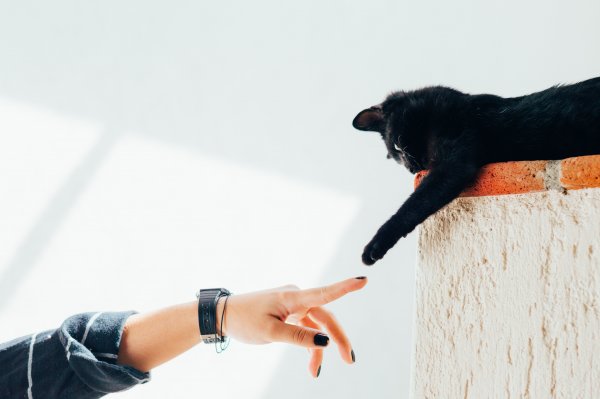 It’s doubtful that your cat is legitimately trying to hurt you with its paw. Playful behavior—especially in younger cats—is their way of learning how to hold back, not strike out with their claws extended, and not to be overly aggressive with their bite.

There are exceptions, of course, but there would be accompanying behavior that you would notice as well. A cat’s body language—once you figure out the visual cues—can be a font of information and a doorway into her unique personality.

A stiff, lowered tail, shrunken pupils, ears upright and turned towards you, or a direct and unfaltering stare before a strike are all indications of aggression and require correctional training.

Why Does My Cat Use Its Claws When It Hits Me?

There are several reasons your cat may use its claws to hit you:

There are ways to both correct this behavior and ease your cat’s temperament. Pay close attention to her body language. If her ears are peeled back, she’s nervous—or if her tailing is swishing back and forth quickly.

If you’re in the middle of petting her, and her body goes stiff and frozen—even if it’s only for a brief moment—stop petting her and let her be for a while. It’s a sure sign that she’s finished appreciating your affection.

What Does It Mean When A Cat Slaps You?

Oftentimes, your cat is engaging in a sort of predatory play, or she’s in her pouncing role and you’re the oblivious mouse in the barnyard.

You can either indulge in this little aggressive play-act—turn the tables and stalk her back—or correct it by completely ignoring her.

Playful cats, or cats in a playful mood, love this kind of play. Ignore her, and engage her later, on your terms and at the appropriate time. She’ll learn when and where her aggressive play is appropriate.

Why Does My Cat Put Her Paw On My Face?

There are several possibilities for this. She may be engaging you in playtime, cuddling, or vying for your attention. It’s also a signal that she’s had enough. Lastly, cats have scent glands in their paws and she’s simply marking you as hers.

If it’s more than just putting her paw in your face, more of pushing or massaging touch, you can be sure she’s secreting pheromones from her paws to mark you as her own. It’s not a sign of dominance so much as one of affection and family.

Body language is always important, as you get to know each other, you’ll begin to recognize her personality by how she acts. Sometimes, a paw on your face is simply a signal that she’s had enough affection for now.

If she doesn’t leave you after putting her paw in your face, it could also be a sign that she wants to play or cuddle. Look for the visual cues of playfulness or fatigue.

Why Does My Cat Swat At Me?

Because it’s playtime. This is especially true with cats who have an ingrained, playful personality or are extremely active.

It’s primarily a method of getting your attention to let you know she’s ready to play and willing to initiate it. It’s not normally a sign of aggression or overt cruelty.

Active and playful cats will do this far more often than lazier personalities. If it’s aggravating, it could become a problem because your cat’s energy levels don’t dissipate based on your mood.

Like any unwanted behavior, ignore it and divert her aggressive playstyle to more suitable times of the day.

It may be a good idea to stock up on toys and interactive devices to funnel her energy into something appropriate, rather than taking her energy out on the armchair of your couch, for instance.

Why Does My Cat Hit Me And Run Away?

If your cat hits you and runs away—unless there is hissing or claws involved—it’s usually a form of play.

Think about it as a drive-by swatting. Tag, you’re it. This is another method that cats like to use to engage in play or get your attention. If you’re petting her, it may also be her signal that she’s had enough.

Once again, body language is important. If she is showing signs of aggression, it could be because she is hurt, and petting her exacerbates the problem. If it’s a frequent occurrence when you pet her, a trip to the veterinarian may be in order.

Her body language will tell you if she’s in fight or flight mode, injured, or simply bored and ready to leave. If she’s not injured, it’s probably a sign that you should play with her more and help relieve some pent-up energy, especially if she’s an active cat.

Why Does A Stray Cat Hit Me With Its Paw? 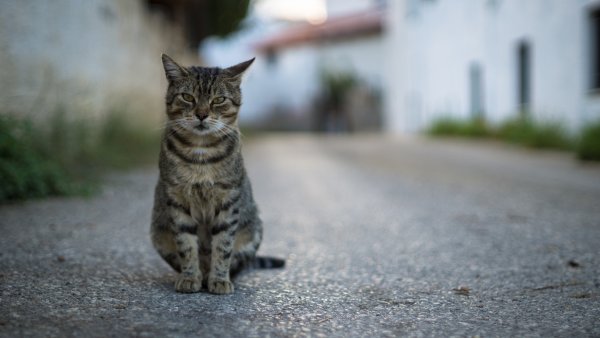 A stray cat, especially one who has never engaged with you previously, will start by hitting you—without its claws—as a warning to stay back. The claws will come out if you’re persistent.

It may even react with claws from the get-go and this is both a territorial and self-defense reaction to your presence. Even if you’ve been feeding it for some time, that doesn’t mean it won’t react in an aggressive/defensive manner.

Stray cats, like house cats, display the same types of body language. Nervous cats will peel their ears back, while aggressive ones will stiffen and lower their tails, their pupils will shrink and dilate, and they’ll stare directly at you, ears pointed forward.

Why Does My Cat Hit My Hand When I Try To Pet It?

It simply means that your cat doesn’t want to be pet and there could be several different reasons for it.

While most cats display similar body language in different situations, each cat has a unique personality. If this is a new behavior, it’s worth having a vet check it out, as it may be that your cat has an underlying physical issue that’s bothering her.

Some cats enjoy it when you pet their backs, others hate it and prefer to have their head or chin rubbed. Some cats become extremely irritable if you pet a certain area too long, or pet them too much.

Will a Cat Learn to Stop Hitting You With Time?

Consistency and routine will teach her your habits and she’ll learn that she’s wasting her time and energy trying to get an immediate response from you.

An untrained cat may even throw down on you while you’re blissfully asleep, batting you with her paws for attention and playtime. The best way to redirect such behavior is to ignore her and play with her fifteen, maybe twenty minutes after you wake up.

What Can Happen If I Ignore My Cat Hitting Me With Its Paw?

Uncorrected behavior is often repeated and cats are no different than any other animal in that regard. In all likeliness, the behavior will continue or increase in frequency.

It’s important to not allow aggressive behavior to go on without an adequate response. Never physically punish your cat, as that will increase her fear and aggression.

Learn to recognize signs of overstimulation petting. When your cat’s body language signals aggression, stop petting her and set her down. Use treats to encourage good behavior, such as when she is calmly allowing you to pet her.

Spend more time in play mode, encouraging her to get her energy out and improving her bond with you.