Why Do Cats Meow Before Pooping?

If you are freaked out by your cat making weird meowing sounds just before she poops (Click here to see my 3 Best Cat Litter Mats for Urine and accidents), you are in the right place. I am going to explain what could be the issue…

Why do cats meow before pooping? It could either be by habit or a sign of a health-related issue that is causing your cat some discomfort. There are quite a few potential issues, but a few examples are a Urinary Tract Infection (UTI) or cystitis.

Now that you know why this could be happening, let me explain in more detail, what happens if this happens after they poop, things to avoid if they are meowing in this way, and more.

Contents show
1 More detail on Why your cat could be doing this
1.1 Health-related issues
2 Why would she Meow after Using the Litter Tray?
2.1 Old Age
3 What If She Defecates Outside of the litter Tray?
4 Why do cats meow so much?
5 What should you avoid doing when your cat is making this meowing sound?
5.1 Avoid Punishing Her
5.2 Do not give in to all of their demands
6 Why does my cat scream when pooping?
7 Why does it hurt my cat to poop?
8 Do cats get embarrassed when they poop?
9 Will cats hold their poop?
10 Does wet food help cats poop?
11 Related questions:
11.1 Q: Do cats pee out of anger?
11.2 Q: Why do some cats act really wild at night-time?
11.2.1 Predatory behavior
11.2.2 Old age
11.2.3 Issues with fleas

More detail on Why your cat could be doing this

The chances are if this is something that your cat has done by habit previously then it may not be anything to worry about.

However, if you have only noticed this recently, then you need to look into it. The reality is you know your cat more than anyone else. If this is out of character and something that you bad feeling about, act on it.

If the meowing sounds slightly high pitched or more frequent than usual. In my opinion, it’s best to get her checked out by your vet as soon as possible. Just to play it safe.

The reality is, there are a number of different health-related issues that this could be, not just a UTI. Such as:

Why would she Meow after Using the Litter Tray? 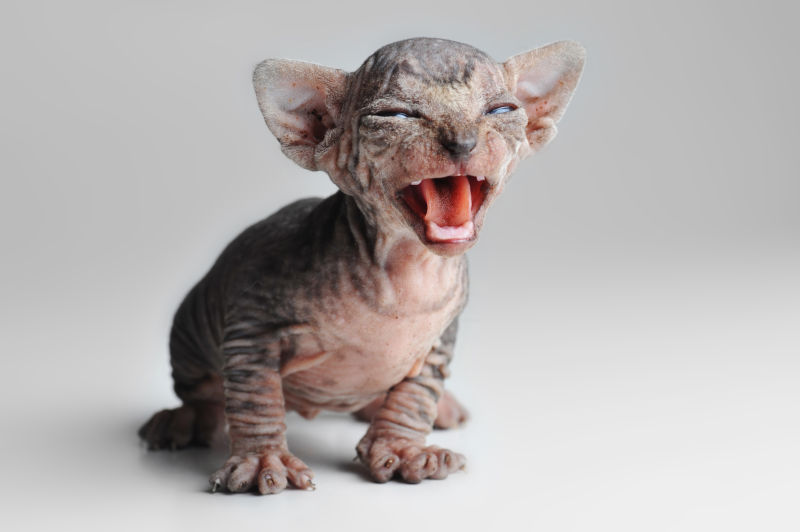 A cat meowing and looking unhappy.

On some occasions, you may notice that your cat is meowing after it uses the litter tray (not before). If this happens, what could it really be?

If you have already got your vet to check on your cat, which I highly advise you do, and they give you the all-clear, it could be something else.

Firstly it could be to do with a territory-based issue. So, the question is have you introduced a new cat recently? Is there a potential stray cat that is entering her territory?

These are the questions you need to ask yourself. Because it could simply be a territory issue.

Another thing it could be is old age, let me explain…

As cats get older sometimes they get a little bit confused. They do things which are unexpected. There have been cases where cats have been known to make these sounds after going and using the litter tray and it’s not actually anything to could be concerned with but just more down to age-related confusion.

What If She Defecates Outside of the litter Tray?

First and foremost you need to go to your vet to ensure there are no health-related problems. As well as this it is a good idea to give the area that has been soiled with a very good clean.

The best way to use this is to use an enzyme-based cleaner which will give it a good thorough clean.

The reason you want to do this is because of the scent (and the mess obviously). Any scent left behind could entice your cat to defecate there again. So, best to clean it up and stop the chance of this keep happening.

Why do cats meow so much?

Kittens meow a lot more. The reasons for this can be a number of things. In particular, as you probably know, kittens like to meow when they are:

As your kitten gets older, patterns change. They start to reserve meowing for communication with us humans.

They start to develop other ways of communicating with other cats, such as:

One thing to point out though. The amount of meowing a cat does largely depends on the type of breed that you have. For example, oriental cats, such as Siamese cats, are known for using a lot of meowing. Therefore, you can expect a lot from them.

What should you avoid doing when your cat is making this meowing sound?

As tempting, it may be, ignoring your cat when she is meowing is not the answer. Although you may not want to reward her for making this consistent meowing sound. The reality is, she’s trying to communicate with you for a reason.

Often this could be because she’s hungry, in a predicament such as stuck inside a room. Whatever it is, she needs some assistance from you, are you with me?

So before even considering ignoring her, check in with her to find out exactly what the issue is. Because most of the time they will only meow if they need something.

Avoid punishing your cat for meowing. Do not try to shout at your cat, spray them with water or anything like this in the attempt to stop them from meowing. The reality is, this really will not work.

It is more likely to confuse them and in extreme situations, it may start to make them not trust you. And lead to her not wanting to be around you anymore.

Do not give in to all of their demands

Although you should not ignore them. At the same time, you need to find a balance. Do not necessarily give her everything that she wants. Because she will start to believe that they can just Meow and literally get anything.

A bit like a moody toddler to an extent. You cannot give a child everything they want or they will become spoiled.

Why does my cat scream when pooping? 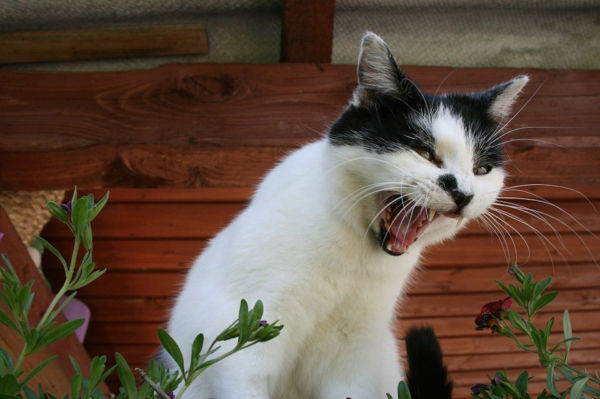 An angry-looking cat with its mouth open.

If your cat screams while it is pooping it is a bad sign. It generally means that it is in some form of pain, or discomfort. This can happen if it has some infection, something is causing a blockage or another related health issue.

If this is the case you need to get it looked at soon as possible from your vet. This is important because it is unlikely to just disappear. And, your vet may be able to relive its pain quickly once it understands the issue.

Why does it hurt my cat to poop?

Your cat may hurt itself when it poops for several reasons. However, a common issue for this is constipation. This will make it hard for your cat to release the stool. If you notice any signs of blood or lack of any stool this is a strong indication of these. Especially if your cat is obviously straining.

Humans are known to get this as well. And, I have personally gone through this. Personally, I felt it was very painful and I had no idea how long it would go on, which is the biggest concern. Mine took about 18 hours to clear, but other cases can take days.

Do cats get embarrassed when they poop?

Cats are not known to be embarrassed when they poop. Some people may mistake their tendency to cover their poop as embarrassment, but this is different. They do that instinctively for a couple of reasons. Firstly for tidiness, but mainly as a way to hide their trail from predators.

The latter may seem far-fetched for a domestic cat. But, this is believed to be a deep instinct from their wild ancestors that relied on this tactic for survival.

Will cats hold their poop?

It is unlikely for a cat to hold its poop, but there are no known studies to prove it either way. However, a normal pooping frequency is anywhere from once to three times a day. Anything less could be a cause for concern. So, you may wish to look into it if that’s the case.

Wet food can help cats to poop. This is because this food offers more moisture and hydration for cats. When this happens it naturally softens the poop and makes it easier to release its stool. This is one of the reasons many cat owners opt for it or at least a combination of wet and dry food.

Q: Do cats pee out of anger?

No, they do not pee out of anger. No matter what you have been told before, this is a myth.

If you are noticing that she is peeing in unexpected places and causing you issues. This could be down to a territory related issue. Or, she could have a health problem.

According to PetNostics, Health problems such as lower urinary tract disorder (LUTD) could be a reason for this. Symptoms of this disease can be seen by frequent small bursts of urine, which is causing your cat pain.

You may also notice that the urine has a very strong smell. Even more so than the standard cat urine (Click here to see why cats poop when you get home) .

Q: Why do some cats act really wild at night-time?

This is also known as “midnight crazy”. It is not something that is usually a big concern. Most cats have their times when they act crazy during the night.

Such as running around downstairs (Click here if your cat won’t come down) while you’re trying to sleep upstairs,  doing erratic movements, or unexpected behavior.

Here are some common reasons for this…

Cats are instinctive predators. Especially if they see mice or other annoying insects that they want to chase.

If they have not used up their “hunting energy” during the day, sometimes they have pent-up energy that they need to get rid of. Which may result in them acting a bit crazy at the end of the day or the night.

As cats get older sometimes they have a tendency of acting a bit wild. And doing some unexpected behavior. This is just one of the unfortunate symptoms of becoming an older cat.

If your cat has problems with fleas it may not be obvious why they are jumping and moving around like a madman.

But they could actually be quite sensitive towards fleas. Which is causing them problems. If this is the case you need to look into it and see if you can get rid of this problem.

In some extreme cases, you may notice that your cat may have FHS. This is a rare syndrome that usually occurs in the mature years of a cat. However, the biggest issue with this is, how it occurs is still unknown.

Why Does My Cat Poop When I Poop? (Safety or Stealthy?)

Why Does My Cat Go Crazy Before Pooping? (Horrified?)