Why do Cats Lick Their Paws then Wipe Their Face?

Understanding why cats lick themselves is confusing and weird at times. In particular, I have often wondered why cats seem to lick their paws, the way they do. I looked into this and discovered the answer, let me explain…

Why Do Cats Lick Their Paws then Wipe Their Face? This is their way of cleaning themselves. And also a method to replenish natural oils in their fur and skin. They also detest water baths, unlike us humans. So this is their only way to keep clean.

As I grab my ice cream, I find myself licking my lips. Have you ever tried not doing this? Drives you nuts, right?

I think this is a great comparison to the instincts of cats. But let me dig deeper now and address the following, why they lick their paws after eating, reveal other reasons why they may lick themselves in this way, and much more…

What are the main theories behind Cats Licking Their Paws in this way?

A cat licking its paws

There are two theories behind this:

Regarding the first theory, it is believed that they are simply cleaning their face with their paws. If you watch any cat, whether it’s your’s, a neighbor’s, or any cat for that matter.

They will usually clean their body first by licking then follow up with licking their paws. Then, wiping their face. This is common amongst all species of cats.

As you probably know, cats do not really like to be doused in water. Therefore, this is their method for keeping their body and face clean.

This theory suggests that the natural oils in their body (what about jojoba oil? click here) is being replenished by licking their paws and then wiping their face. I say “theory”, because there is not any real hard evidence to support this.

Why do cats lick their front paws thoroughly after eating?

Typically this is done to clean their paws. However, there is another dimension to this. You need to understand that cats are definitely agile creatures.

However, there is a limit to their agility. Meaning, areas such as behind their head, face, and chin is not easy to be touched without using their front paws. Think of their paws as a cleaning cloth in this regard.

After they eat, they will firstly clean their paws. But, then moisten their paw, so that they can then wipe and clean their face.

Also, you should expect your cat to be doing this kind of grooming regularly. If they are not doing it, then there is clearly is an issue.

However, on the other extreme, if they are doing it excessively, this could also be a concern.

Could there be other reasons why cats lick themself in this way?

Yes, essentially there are quite a few different reasons why they may do this. For that reason, I will break this down for you now…

In extreme heat or cold conditions licking themselves can be used as a way to help control their temperature.

The theory is that cats, in cold weather, lick their skin and fur. The saliva will help to coat their fur to generate a barrier against a cold.

On the other extreme, in hot weather, you may find them licking and cleaning themselves as a way to help cool down.

Rubbing in the new scent

Cats are very sensitive to smells. In addition to this, they have scent glands in their mouth and cheeks.

You may find that if your cat is using its paws (Click here to learn why he touched you with it) to wipe its face (could it be cleaning boogers? click here), it may actually be trying to ease this scent out.

For example, if your cat had an unexpected bath. They may want to try and get their scent back onto their body.

You may also notice, in some extreme cases, if your cat is feeling very anxious. They may start doing some excessive grooming. This is obviously some cause for concern. This is something that you should follow up with your vet.

If your cat is injured. It may also attend to its injuries by gently licking the wound. Sometimes these wounds are not necessarily serious.

They may not be big open gaping wounds. They could actually be injuries that are not even noticeable with the naked eye.

Hiding their scent from predators

Another technique used by cats is to hide their scent. Cats have very sensitive noses. To put it into perspective, their scents of smell is 14 times stronger than a human. They can smell things that would never be on our radar.

Sometimes this skill can work against them. In the wild, for example, mother cats will try to clan off herself and her kittens in an attempt to mask their scent.

In some cases, you may find that your cat just generally likes to groom. Simple as that!

Obviously, this is almost impossible to confirm. But, it’s something that you can see just by their general body language.

When do cats start this grooming process? 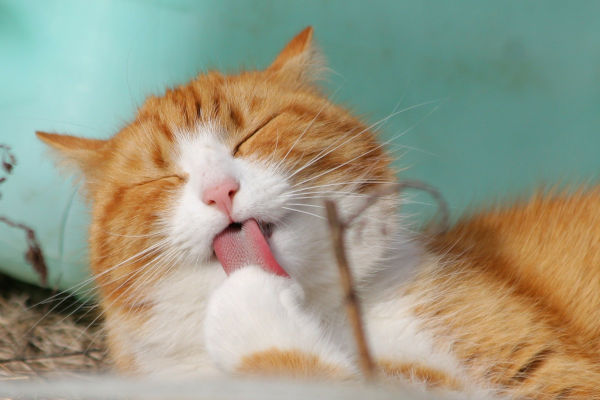 Grooming and licking themselves start from when they’re kittens. Before they are even 4 weeks old their mother will lick them. This is for a few reasons:

At about 4 weeks old they will start mimicking their mother and start to groom themselves. 5 weeks and beyond you will even notice them starting to groom the other littermates as well.

This grooming process is built in their DNA and is something that is part of cat culture.

When can this Licking become a problem?

In some extreme cases, you may find that a cat is grooming itself too much. In a way, it can become excessive. This can lead to physical problems.

An example, it could start to affect their skin and fur. Causing unsightly bald patches, or even skin sores. You may find some of these anxious behaviors for a few subtle reasons.

If there is a change in circumstance or something which is making your cat feel uncomfortable, this can trigger this anxiety.

Be mindful. This does not have to be anything drastic to us. If you recently moved house. Or maybe you’ve got a new addition to your family, such as a new baby, are you with me?

In this section, I will answer some common questions asked by researchers of cat’s behavior, such as licking and grooming themselves…

Why do cats lick themselves after they’ve had a bath?

In all honesty, cats should not really be bathed. They are not like dogs and do not like exposure to water in this way.

For that reason, you can expect your cat to aggressively lick itself after it’s had a bath. This is because, in your cat’s mind, she is unhappy with the fact that she’s been bathed.

Therefore, she is frantically licking herself to replace the bodily fluids and scent that she believes should be there. Only bathe cats in extreme cases when it’s necessary.

Could cats be licking themselves due to fleas?

It is possible (Click to see why your cat may get fleas). However, in most cases, it is likely to be something else. If you notice it almost nibbling itself, to scratch itself, then this could be cause for concern.

Could my cat be attacking and biting me because it’s anxious?

It could be (Click here for 15 Ways to Stop Your Cat From Biting and Attacking You).

In fact sometimes, as discussed earlier anxiety could be seen from excessive licking as well, not just aggression. Is there anything obvious that you can see causing this anxiety?

It may be advisable to consult a vet to clarify if this is the case. Because, there are many reasons, and unfortunately it is not always obvious what the issue is.

Why do cats lick their paws after eating?

Cats will lick their paws after eating to clean off any mess on their fur. However, they are known to do this even if there is no visible mess. So, theories suggest this is either a habit or done from instinct. Regarding the latter, this could be from their wild living ancestors that done this as part of their daily survival.

It is clear just by spending some time with a cat for a day, they enjoy and take grooming very seriously and are seen doing it multiple times per day, regardless of them looking messy or untidy.

Why do cats wipe their paws after eating?

If you notice your cat wiping after eating this is for the same reasons as them licking themselves after, they want to remove any mess and keep themselves tidy. The wiping action will transfer the saliva to other parts of their face and body and is a necessary part of their after-meal ritual.

Why do cats lick their paws?

Cats lick their paws for several reasons. Some of the most common reasons is to groom themselves, remove mess from their face or body and control their body temperature. Because a cat may struggle to reach all areas on its body licking its paws first helps it transfer the saliva to these areas.

Why do cats lick their paws and rub their ears?

If you see a cat licking its paws and then rubbing its ears then the chances are it wants to make sure they are clean. Its ears are located in a position that is not easily accessed, so it will use its paws to transfer the saliva to its ears when it rubs them.

Why do cats lick themselves?

Cats lick themselves for several reasons. This includes general cleanliness, removing any unwanted parasites, keeping their body cool, or helping them stay resistant to water penetration. Their main activity throughout the day, apart from sleeping and eating, is grooming and licking themselves.

Why Does My Cat Leave Poop Stains?

Why Does My Cat’s Nail Stick Out?

Why Does My Cat Stink Like Fish? (Dirt or Natural?)

Why Does My Cat Bite The Brush? (Fight Response?)

Why Does My Cat Lick My Face When I Sleep? (Risky?)

Why Does My Cat Lick My Kittens Bum?

Should You Clean Your Cat’s Nose? (Is It Pickable?)