Why Do Cats Headbutt? (Fun or Fierce?)

What is cat headbutting?

Cat headbutting sounds violent, but it’s not the type of headbutting that you would see in a rowdy bar. Instead, a cat looks down and pushes their forehead into another animal or onto you softly, but firmly, and often rubs their cheek on their target next.

Not all cats do this, but definitely enough of them that it is well-documented behavior and considered to be perfectly normal.

Why do cats headbutt? 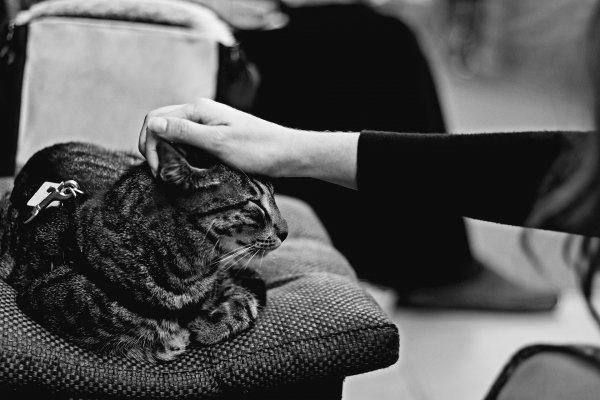 A cat seated on a cushion with a person touching its head.

One thing that you need to understand about cats is that they are very scent-oriented. In fact, their olfactory senses are 14 times greater than our own, and when a cat headbutts you then scent glands on their face are marking you while they are doing this!

Cats do this as a form of trust and affection, as well as a means to put their scent on you as a way of saying ‘this person or animal is mine and I approve of them’.

Is cat headbutting the same as bunting?

Yes, cat headbutting and ‘head bunting’ are the same thing, in which a cat presses or rubs their head against something in order to mark it with their own scent. It’s not so much an act of dominance, even though they are certainly marking you with their scents, but rather more one of affection, trust, and acceptance.

You will also hear it referred to sometimes by the term ‘allorubbing’, but these 3 descriptions are interchangeable – they’re just fancy ways to say ‘head rubbing’.

Should I headbutt my cat back?

Yes, you can definitely headbutt your kitty back, just make sure that you are extremely gentle about it and that it’s a soft headbutt, rather than a ‘pushy’ one that might frighten your cat or even make them aggressive.

When you do it the same way that your cat is doing it, then you are speaking their language, and that headbutt will communicate trust and affection in a way that your kitty will instantly understand. It’s a little weird, but it’s fun and pleasant and it will only increase your bond with your cat.

Is cat headbutting a form of affection?

Yes, headbutting is indeed a sign of deep affection and trust. A cat would never do this with a human who is a stranger to them or an animal that they don’t know or don’t like. The transfer of scents mixes the smell of your cat with your own scents and this makes your cat feel more comfortable around you.

If your cat is doing this, they are showing you that they love you and accept you as a family member.

Why do some cats headbutt but others don’t?

It’s all a matter of individual preference. Some cats like to headbutt, while others will find different ways to express their love and acceptance of you. For instance, some cats prefer to simply rub against you, which also marks you with their scents, as they have scent glands in their face, body, and paws.

Other cats will ‘knead’ you, like a baker smoothing out dough, and in this case the paws are putting scents on you that accomplish the same basic thing as headbutting. They mark you with scent and also manifest as a physical show of (sometimes painful) affection from your cat.

So, if your cat doesn’t headbutt, then don’t worry – they have lots of other ways to show their affections. The easiest way to know for sure that your cat trusts you is to see if they ever stand with their back facing you – no predator would ever do that without perfect trust!

Is it normal for cats living together to headbutt (bunting)?

Yes, when cats live together and bond, headbutting is quite common, as is constant grooming of each other. Cats are very demonstrative about their affection, you just need to know what to look for, and headbutting, grooming, and wrestling each other without actual harm are all good examples of playful affection.

Is cat bunting a form of territory marking?

This is a common misconception. Many people think that headbutting is just territoriality, but it’s actually more than that. It shows trust, affection, and respect, though in some cases headbutting can also be a way of simply getting your attention.

If your cat headbutts you and then tucks them down or to the side, then it’s for attention – especially if they headbutt you and then roll over so that you can rub their belly! In most cases, however, it’s more of a form of respect, affection, trust, and acceptance.

Why won’t my cat headbutt me? 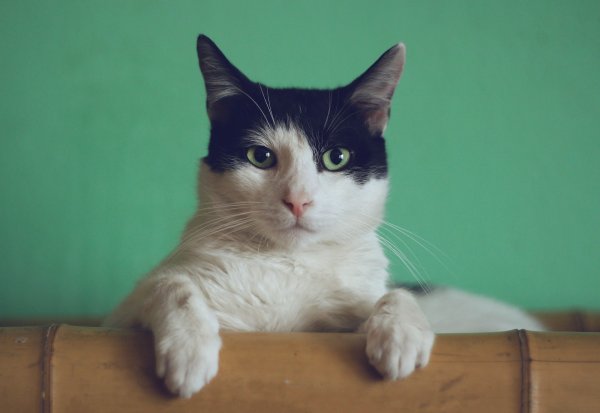 A black and white cat lying next to a brown bamboo.

Don’t worry if your cat won’t headbutt you – many don’t. Your cat has many ways that they can show their affection and not all cats like to be touched as much as others. Sometimes, just laying curled up in a ball next to you is the highest mark of respect that you can expect from your cat.

Others will insist on touching you constantly, headbutting you to mark you with their scent and to demand attention when you are focusing on something else. It all depends on your individual cat.

These little predators have unique personalities, just like we do, so just because your cat isn’t all ‘touchy feely’, that doesn’t mean that they don’t love you – they’re probably just being ‘macho’.

Why does my cat headbutt me in the morning?

Headbutting in the morning is one of the most common kinds, and this is a definite call for your attention. When your cat does this, they are basically saying ‘I love you… where’s breakfast?’. The proper response to this is a light headbutt back to show that you love them and will see what’s in the kitchen.

Just don’t forget to feed them after that, or your cat will go from headbutts to vocal nagging, so you might as well feed your hungry little friend right away and then make a little breakfast for yourself to start the new day.