Why Do Cats Fold Their Paws? (Real Reason)

Have you ever seen your cat fold her paws and get into a rectangular position? I am sure you must have because they all do this. Let me explain why…

Why do cats fold their paws? Cats fold their paws in this way because it’s a form of relaxation for them. They can also stay reactive in this position due to the position of their legs. If needed, in a second they can leap up and react.

Now you know why they fold their paws. Let me now explain why they need this flexibility in this position and some other interesting positions that they have.

Contents show
1 Why do cats need this flexibility when they fold their paws?
2 What is this position also known as?
3 Other Reasons why cats fold their paws
3.1 01. Not feeling like communication
3.2 02. Preserving body heat
3.3 03. Watching its surroundings
4 What is meat loafing?
5 What other positions do cats have and what do they mean?
5.1 Laying down with one paw-out
5.2 Curled into a ball
5.3 Lying on their back with their belly exposed
5.4 Stretched out on their sides?
5.5 The Sphinx Position
5.6 Staring into space, aimlessly
5.7 Play wrestling
5.8 Chattering away at animals
5.9 Hanging around your computer like a bad smell
5.10 Quivering her behind
6 Why does my cat curl up into a ball?
7 Related questions:
7.1 Q: Why is my cat changing its sleeping location?
7.2 Q: Why does my cat just sit and stare at me?

Why do cats need this flexibility when they fold their paws? 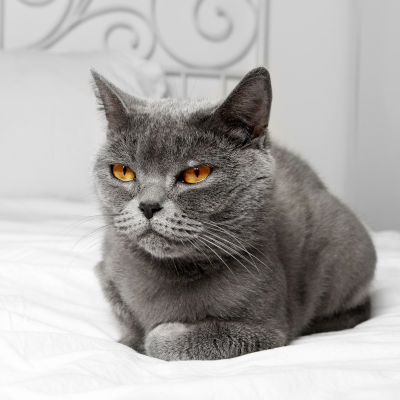 The reason they choose this position is for flexibility. They can easily jump up and react while they’re in this position.

…If they are in this position, with their paws folded, and suddenly a mouse comes running past them. They can leap up and immediately go after this pesky mouse! are you with me?

Alternatively, let’s say your cat is under attack, let’s say next doors little nippy Jack Russell dog. Your cat can leap up from this position to its feet and get away.

What is this position also known as?

This position is also known as the “Cat Loaf” or “Kitty loaf”.  I’m now assuming you may be thinking why is it called this? Let me explain…

Simple, it is called this because when you look your cat in this position, she literally looks like a loaf of cat bread, are you with me?

Your cat is literally in a rectangular loaf shape. And this is why it’s called “the cat loaf” for adult cats and “Kitty loaf” for kittens. Simple as that!

Other Reasons why cats fold their paws

Here are some other reasons why you may see your cat doing this behavior:

Sometimes your cat will just want some time to itself. When this happens it will not respond to your requests for affection. During this time it may stay with its paws folded.

However, you should not take this personally. It does not mean your cat loves you less. It just means it needs some time along. As you may already know, we humans often have similar feelings some days.

Another reason for your cat to fold its paws is that it feels cold. When this happens it will compact its body in this manner to keep warm. Similar to how our fingers can get cold a cat’s paws can too.

To save them from the cold they will place them under their body. Their body, or core, will keep their paws warm during this time. 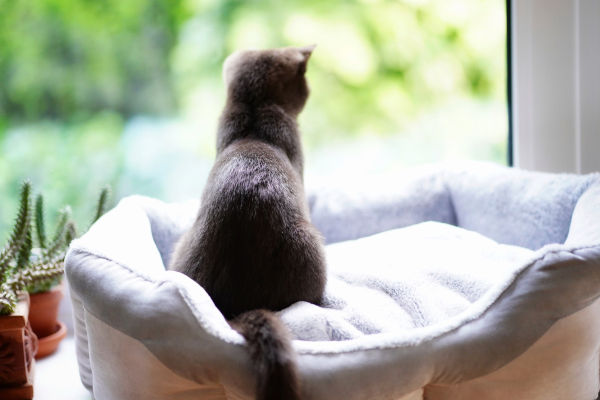 Cat sitting at the window sill.

What is meat loafing?

Meat loafing, or loaf position is another word used for a cat in this folded paws position. It comes from the shape the cat creates when they are folded in like this.

Basically, they look like a rectangular loaf of bread in this position. And, this resemblance has created several other related names to describe it.

What other positions do cats have and what do they mean?

In this section, I am going to introduce you to some well-known cat positions followed up with an explanation of what this actually tells us…

Laying down with one paw-out

This position is ideal for cats because it allows them to easily clean themselves. If you take a glance at them in this position it almost seems like they’re in a kind of yoga formation.

Curled into a ball

This is quite a common position that you will see almost all cats in at some point in their life. It’s very comfortable and snug for them. It also keeps their organs protected and keeps them warm.

Lying on their back with their belly exposed

This is a good sign that your cat loves you. Essentially your cat is saying that it fully trusts that you, you are not a threat, and she feels 100% comfortable with you.

Essentially it is a way for your cat to tell you: “please stroke me on the belly and play with me. I’m happy to be here with you.”

Stretched out on their sides?

This is when your cat is having a big stretch. Or, if they’re in front of a warm fire relaxing and just feeling chilled.

Sometimes while she is in this position, if she falls asleep, you may see her do a slight little twitch.

This twitch is nothing to be concerned about. This is just them having an enjoyable time snoozing and just relaxing.

The Sphinx (Click here to see how much they cost) position is quite similar to the “cat loaf”. But, her head is also up and erect. This is usually a sign of them being happy and relaxed. But, at the same time, they’re being just a little cautious and alert. Looking around in case anything may come their way.

Have you ever seen your cat aimlessly staring into space? It seems that they’re in a trance or looking at something that maybe you can’t see, right?

The reality is there’s no need to panic. Your cat is not going crazy, sometimes they might see or hear something which you are not aware of.

It could be something as simple as a small fly that we haven’t even seen. Or maybe they have heard something way in the distance which is attracting their attention. So, no need to panic,  this is a common position for cats.

This is when your cat is rubbing its paws around your arm or leg and playfully biting you. In all honesty, sometimes this playful biting could actually end up with your skin getting punctured, which may alarm you.

Don’t be alarmed they don’t generally mean to hurt you. It’s just them underestimating their strength and sharpness of their teeth.

She really just wants to play with you. It is advisable just to play along with her. But, if you’re not comfortable with that then you can train them to not do this.

Chattering away at animals

This is a common position. Typically seen when she is in hunting mode. You may see them doing this when they’re trying to chase a bird or a mouse. You know, something which has caught her attention. It’s just the way for her to get into hunting Mode.

If you are always busy with your computer, like me. Then you’ll find that there are times when your cat takes the position of hanging around your computer.

She is in this position to show you affection. Also, the chances are, she likes the heat that your computer emits.

Cats just like to be near humans for the most part. And show their affection. So, if it annoys you, simply gently pick her up and relocate her. But, if you can tolerate it, go with it. It will build a bond between you and your cat.

This can sometimes be associated with displaying dominance. Or even a precursor before spraying some furniture or equipment to mark their territory. However, if your cat is neutered then the chances are this won’t be the case. So, no need to worry.

Why does my cat curl up into a ball?

Curling into a ball is another way for your cat to stay warm. They also feel comfortable and secure in this position. The theory has it that it stems from their life as young kittens.

This is because it is commonplace to see kittens rolled up into balls like this sleeping together to keep each other warm.

Q: Why is my cat changing its sleeping location?

As humans, 90% of the time we spend sleeping in the exact same place. Every single day. This is just human behavior. In fact, we are so predictable not only will we sleep in the same bed, we will even sleep on the exact same side of the bed night after night.

Cats on the other hand, especially in the wild, wish to sleep in different locations. This is as an instinctual thing to prevent predators from working out their location.

This is why you might find your cat sometimes sprawled out in front of the fire sleeping, then hidden in a cupboard somewhere, and then maybe under a coffee table the night after.

It is completely random to us. And may Leave us simply scratching our heads. But, you just have to accept this is just the way they are.

Q: Why does my cat just sit and stare at me?

Most of the time this behaviour is due to the fact that your cat just simply loves you and wants to look at you.

On other occasions it could be a hint that they want some of your food. Especially if you’re sitting down for your afternoon lunch and she can smell the delicious aroma of food.

It may be a bit weird because one eye seems to be fixed on you while the other one is in a deep slumber.

This is just instinctive. A way for her to protect herself against predators that can attack while they’re sleeping.