If you have noticed that your cat is shaking its paws after eating, it may look weird and leave you wondering why this is happening…

Your cat is just doing this as a way to ‘clean up’ their paws a bit after eating. If you take a little time to watch your cat when they eat, you’ll often see that they use their paws from time to time. It is not uncommon, for instance, for your cat to fish out a few pieces to eat them separately.

This is wired into them instinctually, as normally a cat in the wild would likely be part of a pride of cats, and digging out a little food of their own to eat privately ensures that they don’t miss out on a meal.

Cats are also quite sensitive about their paws and aside from shaking out kernels that may have gotten stuck on a claw or between the toes, sometimes there’s a little bit of saliva that you can’t see but that your kitty feels, and so they are simply ‘shaking it off’.

Do cats shake their paws if they dislike their meal? 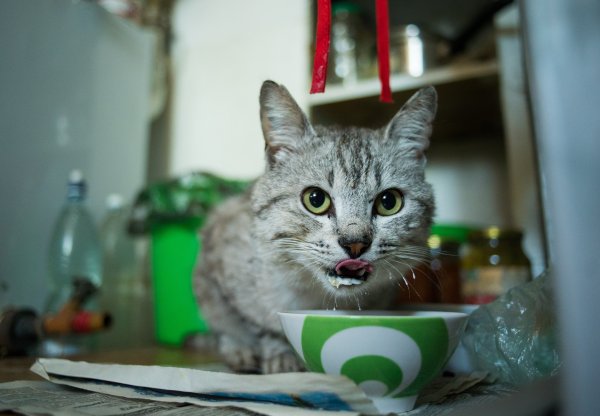 A gray cat eating from a ceramic bowl.

No, when your cat shakes their paw, it doesn’t mean that they don’t like its food. Cats are often picky eaters and if they don’t like the food, they’ll simply ignore it unless they are desperate. As such, you needn’t have any worries on that account.

If your cat doesn’t like the food that you’ve provided, they’ll let you know and they’ll be very clear about their displeasure. Cats are funny (and charming so, sometimes) about that.

Is it normal for a cat to lick its paws after eating? 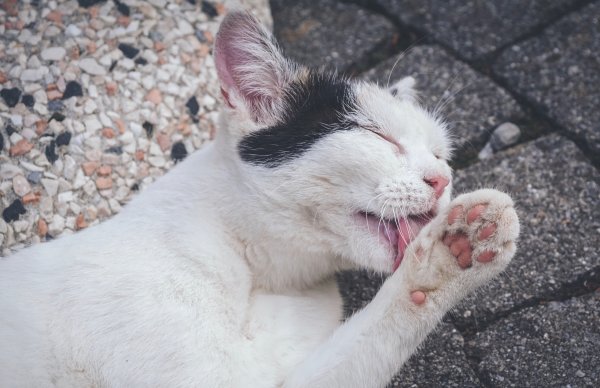 A white and black cat lying down while licking its paws.

Yes, it’s not uncommon for a cap to lick their paws after eating, and it’s much the same thing as when humans eat a yummy, albeit messy meal, such as ribs or another type of finger food. Cats are very fastidious when it comes to their hygiene and if their paws feel dirty, then they are going to clean them.

Do cats shake their paws if they step in water?

Yes, cats will indeed shake their paws if they get them wet, as they are quite sensitive there. A good example is an old trick for keeping cats out of things – applying the double-sided tape. This method is highly effective because cats hate the feeling of stickiness on their normally pristine paws.

So, if your cat gets their paws wet on accident, you can rest assured that when they shake it off it’s nothing abnormal – they just hate it when their paws feel wet.

Are a cat’s paws sensitive?

Cat paws are extremely sensitive, as it turns out. The pads that you see on them contain a very large amount of nerve receptors, to the point that their paws not only make them excellent acrobats, but even better hunters.

If a cat somehow manages to miss the scent of prey plopping down from a higher area nearby and doesn’t even see them, they might well feel vibrations on the surface where they are standing.

It’s pretty neat, when you think about it, though it’s also the reason why cats hate it when their paws are wet or dirty. For cats, the rule is ‘with great power comes great sensitivity’ and we think it’s a fair trade-off for all that feline grace and skill.

Why do cats shake their paws, in general?

In general, cats shake their paws when they are wet or it feels like there is some food on them, but muscle spasms or pain may also cause this response. Following declawing surgery or even simply breaking a claw can also produce this behavior from time to time, as your cat adjusts to the feeling.

More often than not, however, they’ve just gotten their paw wet or they are making sure that kibble from their last meal isn’t stuck in their claws or between their toes. Their paws are very sensitive and so they like to keep them clean and functioning at top efficiency.

Why do cats shake their legs after eating?

Leg shaking is sometimes a red flag that tells you it might be time to get the vet involved. Cats sometimes shake their legs as a response to immune conditions or arthritis, so it’s worth your while to get a checkup to rule out any health issues.

While shaking their paws is fairly normal, shaking their back legs is a little bit different and warrants your attention. It’s not about the food when they do this – cats most often shake their heads when they notice a particularly yummy or even a sour or spicy taste.

So, if your cat is shaking their back legs after eating then it’s time for a checkup. It might be that they are forgetting their arthritis for a moment while eating and only just notice it again when they finish. Your vet should be able to tell, so get your cat in for a visit.

Why does my cat shake its paws when walking?

Cats do this when the texture of the surface that they are walking on rubs their sensitive paws ‘the wrong way’. You’ll see this sometimes with very smooth carpet, or linoleum if it’s a little sticky. Sometimes they will do this if there are still food particles in their paws after eating.

Ultimately, it boils down to sensitivity, but if it is happening all of the time then it might be time for a vet checkup to make sure that it’s not a symptom of something else!

Why does my cat shake her paw when she drinks water?

When you see your cat shaking their paws while drinking, even though they haven’t touched the water with them, it may be a sign that they are remembering nursing from their mother or it could simply be a little shivering from the temperature change.

While the average human body temperature ranges between 97 and 99 degrees, with 98.6 being our average, kitties run a little warmer than we do. Their body temperatures typically range between 100.4 to 102.5 degrees.

As such, even room temperature water can seem a little chilly at first, kind of like when you jump in an unheated pool on a warm day. This behavior is thus completely normal, so don’t worry, your cat is fine – that water is just a little cold at first for them.

Why do cats shake their paws before going outside?

Sometimes this is just a sign of excitement or just a little ‘ritual of preparation’, kind of like when a human ‘pops’ their knuckles before starting a job.

Your cat may also simply be running a sort of ‘diagnostic’ check on their paws before the terrain changes, to make sure that they are clean and functioning at their full, sensitive capacity, before embarking out into the unknown.