If your cat is tearing up your litter box liner, you may be wondering why this is happening and what you can do about it…

Your cat may be tearing up your litter box liner because it is either bored, hates the sound, or the general feel of it is unnatural. However, there are ways that you can prevent this from happening if its a big issue for you. 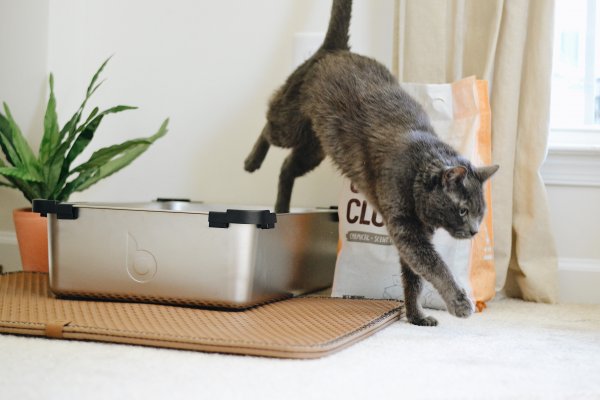 A cat jumping out of a litter box.

Amongst the peculiar behaviors of cats that cat owners often encounter, one is their inclination to tear up the liners you place in their litter box. But the problem isn’t that uncommon or one that can’t be solved. There are a variety of reasons why litter box liners aren’t usually well-received by cats. For example:

Cats have a natural instinct to exercise and sharpen their claws by scratching any object they’re able to scratch. They do so because of reasons such as stress relief, recreation, and a way of dealing with boredom.

Cats may scratch and damage the litter box liners especially when they aren’t trained not to do so and don’t have access to other forms of entertainment such as scratching posts.

b) They Hate the Sound It Makes

Most litter box liners are made of plastic which may create a rustling or crumping sound when the cat steps on it. Cats might find this sound unpleasant and create a negative association with the liner, leading them to get rid of it by tearing it apart.

c) It Doesn’t Feel Natural For Them

Especially if your cat has been using its litter box without a liner for a very long time, it would feel unnatural for your cat to adapt to a liner one day. Many cats may also find the overall feel of the liner unpleasant as it tends to crumple up, leading to a soft and uneven surface that may get stuck in their claws as they step on it.

What Is a Litter Box Liner?

A litter box liner is simply a plastic bag which is attached and lined up with the litter box in order to aid in the box’s cleaning process.

The functional aspect of a litter box liner is that instead of having to manually scoop cat litter, which may take a while, you can just lift the plastic liner, containing all the litter, out of the box and dispose it.

What Are The Benefits of a Litter Box Liner?

A benefit of using a litter box liner is, it speeds up the overall cleaning process of the litter box. Without a liner, you’d have to not only scoop out the litter from the box, but also spend more time washing the box.

You’ll still have to wash and dry the box after using a litter box liner, but it won’t take as long since the liner works as a layer of protection to the litter box’s bottom from all sorts of dirt.

What Are the Different Types of a Litter Box Liner?

There are essentially two major types of liners:

Traditional litter box liners can be considered similar to garbage bags in a trash can. All the dirt and litter is accumulated onto the litter box liners, and when you are ready to clean, all you have to do is lift the liner out of the litter box and dispose it. This is easy, ergonomic, and keeps the box underneath clean.

What Can Happen if Your Cat Damages the Litter Box Liner?

If your cat damages and creates holes in the box liner through scratching, urine and other forms of waste might seep into these holes and get trapped between the surface of the liner and the bottom of the litter box.

This will ultimately backfire the function of a litter box liner and may also lead to unpleasant odors. The cat will develop a negative association with the litter box, causing them to forgo using it altogether and find alternate areas within the home to do their business.

How Can You Prevent Your Cat From Tearing Up the Litter Box Liner?

This might sound a bit extreme, but it’s best to just forgo the litter box altogether if your cat is not adapting to it. You can still easily maintain the cleanliness of the litter box by scooping at least twice or thrice a day, and washing it with a mild detergent at least once per week.

You can also keep two litter boxes for the cat so that when one gets dirty, the cat can just use the other one. In addition, provide your cats several forms of entertainment such as scratching posts and other cat toys.

2) Reward Your Cat For NOT Tearing It 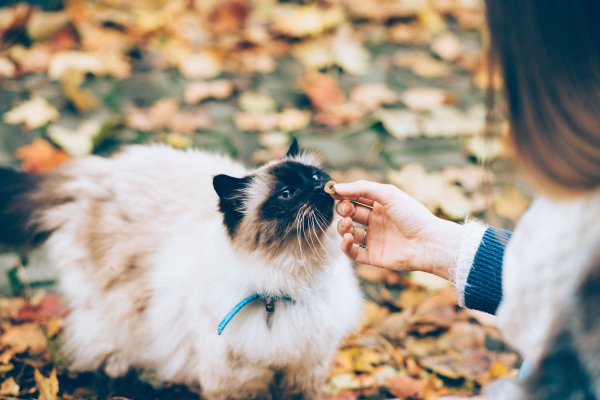 A cat being fed treats.

Teaching animals a habit through a reward system is an age-old process. It may take a while, but whenever your cat does not tear the liner apart, reward it by giving it some extra treats, petting it on areas such as the head or under the chin.

On the other hand, when the cat damages the liners, don’t scold or physically punish it as that may lead to the cat developing a negative, fearful association towards you. Just withdraw from your cat and don’t pet it for a little while.

This process does not have a one-size-fits-all approach, so look up different ways to train your cat through a reward system and figure out which works best.

What Can Happen If The Litter Box Liner is Not Fitted Correctly?

The cat may end up tearing the litter box liner apart if it’s ill-fitted and is creating unpleasant noises because of crumpling, and may even end up stripping the liner off the box if it’s too loose.

The main problem in most litter box liners is the use of plastic. Designers need to come up with a puncture-free, well-fitting material that is also ergonomic and pleasant for the cat’s use.

Do You Actually Need a Litter Box Liner?

You don’t really need a litter box liner, and if you’re able to maintain the litter box well without one already, it’s best to not invest in a liner.

Liners have their positive aspects such as speeding up the cleaning process of the box, but you need to consider if your cat will be able to adapt to it instead of being freaked out by it. Additionally, you’ll have to constantly refresh your supply of litter box liners when they run out so you’ll have to keep an eye on expenses too.

One thing to keep in mind is not to force your cat to adapt to a lined litter box as it will cause them unnecessary psychological distress, leading them to adopt undesirable behaviors such as spraying, mewing loudly, and finding unsuitable areas of the home for relieving themselves.

How Often Should You Change Out All the Kitty Litter?

Keeping the litter box clean will help your cat stay happy and will thoroughly clean out anything that might have gotten stuck between the liner and the box and may have been causing discomfort. Secondly, if you’re regular with cleanup duty, that means you can even skip out on using liners at all.

Why Does My Cat Go Crazy Before Pooping? (Horrified?)

Why Does My Clumping Cat Litter Not Clump? (+ Tips)

Can Cats Find a Litter Box In The Dark? (This is Why)

Cat Peeing Over Edge of Litter Box (What Now?)