Why Does My Cat Squeak Instead Of Meow? (Problem?)

If your cat is squeaking rather than meowing you may be wondering if this is normal, and why it is happening…

Why does my cat squeak instead of meow?

A cat may squeak, instead of meow for several reasons such as an infection, or vocal chord disease. But, sometimes it could just be a temporary sound while they develop into an adult cat from a kitten. If it’s the latter then it’s not really a concern or problem.

So, now you know. But, could its squeak develop into a real meow later on? Could improper treatment cause this to happen? Do all cats meow? Keep reading for these answers, and much more…

Contents show
1 Why does my cat squeak instead of meow?
2 Is it normal for a cat to never meow?
3 Why is my kitten’s meow weak?
4 Could a kitten’s squeak develop into a real meow?
5 Could improper treatment of a cat cause it to squeak?
5.1 How can you avoid improper treatment?
5.1.1 01. Monitor them with children
5.1.2 02. Talk with them (build a bond)
5.1.3 03. Play games with them
6 Do cats squeak when they are excited?
7 Is it possible for a cat not to meow?
8 When should you be worried about your cat squeaking?
9 Could talking to your cat stop it squeaking?

Is it normal for a cat to never meow?

It is normal for some cats to either meow very little or not at all. Especially if they are older cats. These older cats may gradually reduce their meowing with old age. And, in some cases, may stop doing it at all.

Generally speaking, cats do not tend to meow at each other, only to humans. And, as they age it can just naturally reduce. It is not clear why this is. It could be to reserve energy or just the way nature intended it.

Sometimes, if you do not give your cat the reason to develop its voice it may meow very little, or in some cases, not at all (but, more on this later).

Why is my kitten’s meow weak? 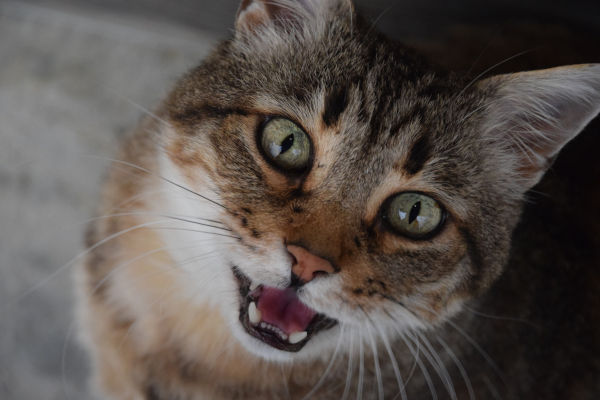 A kitten’s meow could appear to be weak for several reasons such as it is still developing and it will change. However, it could be an infection they are fighting off, or they may have had a traumatic experience, such as being trapped somewhere and needed to meow more than usual.

If it’s the latter, they could have strained their vocal cords and notice it weaken, sound hoarse. But, by the way, a deep meow is something different (click here to see what that is).

Could a kitten’s squeak develop into a real meow?

A kitten with a squeaky meow could easily develop into a real meow as they get older. Some kittens take some time to develop their real sound as they mature. In some cases, it could take a year or two for them to fully establish their normal sound.

A kitten’s meow is generally higher-pitched than an adult cat anyway. So, even if it’s not squeaky you would expect that it will get deeper and change as they get older. Some kittens may do this quicker than others. For example, some could do it within a year, others could be a couple of years.

Could improper treatment of a cat cause it to squeak?

Improper treatment can cause a cat to squeak instead of meow. This can be because, incorrect treatment, such as being held badly, could affect their natural development. A classic example of this is letting children handle the cat, or kitten, unsupervised.

How can you avoid improper treatment?

Knowing that improper treatment can lead to these problems you may be interested to learn what you can do to avoid this happening, here are some things to avoid:

01. Monitor them with children

It is important to always monitor your children when handling your cat, or kitten. Kids do not generally mean to harm cats but they can easily underestimate their own strength.

Also, sometimes it is not just the strength that is the issue. It can be the positioning of their hands. For example, an innocent child may attempt to hold the kitten’s kneck which could cause damage.

Another problem with this is the retaliation the cat may inflict if this happens. Meaning, if your cat accidentally grabs the cat’s kneck, it could respond with a vicious bite, are you with me? So, best to avoid it.

Building a bond with your cat will help it feel loved and also make it appreciate that vocal communication is important. This will help kittens develop their meow sound naturally to help them communicate with you.

03. Play games with them

Another thing you can do, which goes hand in hand with number two above, is playing with them. This will help them to bond and communicate with you more. Also, the more comfortable your cat is with you is the better it is for your relationship.

Do cats squeak when they are excited? 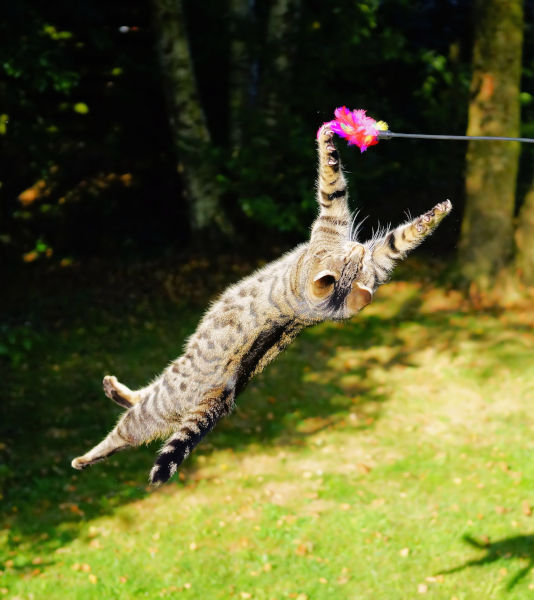 An excited cat jumping up after its toy.

When your cat is excited it may make little squeaky sounds. This is more of a trill sound rather than an attempt at meowing. It is worth noting, a trill si different from a meow. How? Well, it typically with its mouth closed and the sound originating from its vocal cords.

A meow, on the other hand, is with a cat’s mouth fully open and a clear attempt to communicate something. So, if you hear these squeaks during playtime don’t be alarmed. I mean, have you ever let out a weird sound while messing around with friends? Especially when you were younger? Exactly!

Is it possible for a cat not to meow?

It is possible for cats to never meow, or very little. Some cat owners have reported never hearing their cat meow before in years of having them, so it’s possible. Some have noticed very little meowing, such as only when they enter their home after being away for a long time.

It is easy to assume there is a problem if your cat has not meowed around you because it is very stereotypical of cats to do this. But, in reality, this may not happen. Also, the sound of the meow can vary a lot from cat to cat.

When should you be worried about your cat squeaking?

If you notice your cat squeaking while on the floor, and this is out of character. Or, if it is looking in distress then you should be concerned and look into it. It is better to get it checked out rather than assuming it will be fine.

This is because it is better to be overprotective rather than too relaxed and your cat having a legitimate problem that could have easily been resolved if you checked it out earlier. Some fear that they may be “bothering” their vet, but they are there to help, right?

Could talking to your cat stop it squeaking?

Talking to your cat could stop it squeaking. This is in certain circumstances such as a kitten that is developing its vocal cords. If it seems that you enjoy communicating vocally, and is rewarded for doing so, it is more likely to work to develop its voice to the meow we know and love.

Be warned, it may not always be that easy. Some kittens still may take a long while to develop their voices even after you attempt to talk to them a lot. And, some prefer to communicate in other ways, such as running ahead of you (click here to see why they do this).