Why Does My Cat Sound Like a Kitten? (Will It Change?)

Your cat may sound like a kitten because, unlike people, the octave range of a cat isn’t determined by its size. This is why sometimes a large adult cat may let out a softer kitten-like meow. Cats only meow to communicate with their owners, not other cats.

So, now you know. But, what should a cat sound like? Can you do anything to improve this? How can you tell if your cat has real issues with its sound? Keep reading for these answers, and much more…

What is the sound of a kitten?

Kittens meow quite frequently to get their mother’s attention, but not all meows sound the same or even mean the same thing for that matter. When compared to a fully mature cat, a kitten’s meow is squeakier and slightly higher pitched.

While a cat may let out one or two prominent meows to tell their owners what they want, kittens let out several high-pitched squeaks in a row.

Cats make a series of different sounds to communicate to their owners. The most used sound is the classic “meow”, however, every cat will have a different sounding meow from one another.

Even your own cat will have various sounding meows that mean different things. This may sound confusing, but once you spend more time with them the meows start to make sense to you.

Some other sounds that cats make are purrs or chirps (what about chattering? click here) when they’re in a good mood and hisses and growls when they aren’t so happy. Each cat will have its own signature vocal range, and some cats are more vocal than others. A domestic cat is more likely to chat your ear off than a feral cat.

Do Cats Use their Meow To Manipulate their owners?

Cats are a lot smarter than people give them credit for too. They have discovered that they can meow to get us to do things for them.

Another thing they have noticed is that certain meows can get people to react quicker, which is why they may let out a squeak that sounds like a kitten.

Can you do anything to improve your cat’s sound?

The best way to curb this behavior is with a reward system, maybe treats (Click here to see the reviews, on Amazon #Ad), or allowing them to play with a favorite toy.

If there is a particular time they meow a lot and you want that to stop this is when you should use the reward system. When they are being nice and quiet reward them, but take it away if they get chatty again.

Is it normal for a cat or kitten to make a “hum” sound?

It is normal for a cat or kitten to make a “hum” sound. In fact, cats make all sorts of interesting sounds. Most kittens start to meow as a way to communicate with their mothers when they require attention, and they use that same method of communicating with their owners.

The humming sound is different from meows and purrs. Mother cats would hum as a way to get their kittens to pay attention and follow her.

If your cat hums or chirps then they likely are trying to get you to pay attention to them or even point your attention towards something they feel is important. Sometimes these noises also come out when the cat is really happy and excited.

Why does my cat squeak instead of meow? 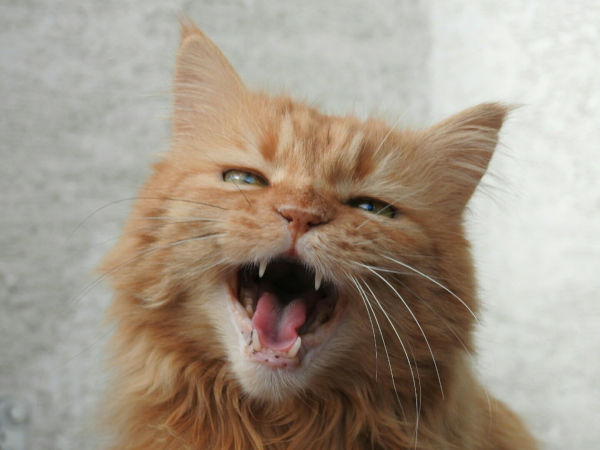 Quite often when a cat can only squeak instead of meowing it is because they had a birth defect that prevented the vocal cords from forming properly.

Animals aren’t much different than humans, and they can have birth defects too. So a cat could be born with vision, hearing, or vocal problems.

Another reason a cat may squeak instead of meow is that there was damage done to the vocal cords. An accident from when they were young, along with many other reasons, could be the reason why the cat squeaks instead of meowing. Since every cat is different, it’s best to consult a vet if you are concerned about your cat’s meow.

What does my cat’s meow mean?

The meow could be a simple greeting to say Hello once you’ve come home. It could also be a big announcement they want to make, especially if they’ve caught a mouse.

A cat’s meow could have one of many meanings, but they do often have different meows to mean different things. This makes it easier for their owners to figure out what they want.

Cats are very smart animals, and quite often they meow as a way to communicate commands. If there’s something they need you to do for them, like let them outside or fetch a toy, they will likely meow at you to get your attention. They also meow as an objection as a way to warn you before they get feisty.

Why does my cat have a high pitched meow?

A longer high pitched meow could signify that they are angry or in pain. This is the type of meow you will hear if you ever step on a cat’s tail by mistake.

A low-pitched meow on the other hand, usually means that they are trying to demand something or in most cases, it’s because their dish is empty.

To have a good relationship with your cat, it’s important to get to know the differences between their meows. There are dozens of different sounds (what about a gurgle? click here) in their language.

How do you know if your cat’s meow is broken?

The only way to know if your cat’s meow is broken is by getting it checked out by your vet. When a cat stops meowing it may be suffering from a sore or inflamed throat.

Never second guess and always make an appointment for them to get looked at by the vet. Once your cat feels better it will be meowing demands again at you before you know it.

The concern is it could have laryngitis and will need Assistance. Just like humans, cats can get colds and other issues that affect their vocal cords.

Would playing the sound of other cats meowing hurt my cat psychologically?

Playing audio or video of another cat meowing won’t cause any psychological harm to your cat. What happens with most cats is once the clip starts playing, their ears twitch as they start to get curious.

They may wonder if there’s another cat in the house, but since they can’t smell anything they’re not upset yet.

The next thing they will probably do is search around the source of the audio clip to find out where that sound is coming from. After a couple of seconds (if they even last that long) the cat will realize there’s no other cat around and quickly lose interest.

The sound doesn’t affect them negatively, it only sparks their curiosity (and it doesn’t do that for every cat).