Why Does My Cat Sit In The Shower After I Shower?

If you have noticed your cat sitting in the shower after you have used it, you may be confused and wondering why it’s doing this….

Why Does My Cat Sit In The Shower After I Shower?

It’s certainly an odd habit unless you think about it a little. First off, think about the surfaces. Sometimes the toilet has a nice, carpet toilet cover, and the sink and the tub are quite smooth and cool to the touch. Finally, when you consider that we do most of our grooming there, it’s easy to see why it’s an appealing place for a curious cat.

Now, you know. But, do all cats like showers? Should I keep my cat out of the shower room? Why does it try to get in there with me at times? Keep reading for these answers, and much more… 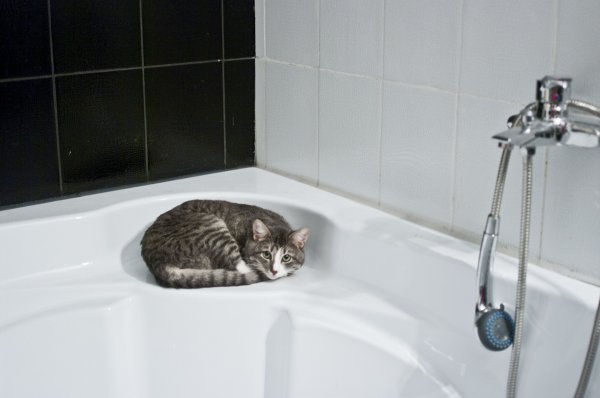 A cat lying in the bathroom shower.

Nope, most cats tend to avoid the showers, it all depends on how early they were introduced to the bathroom and their opinion on baths. Some cats that have played in the shower as kittens or received gentle baths there early on don’t develop an aversion to the bathtub or the shower.

With other cats, they associate the bathroom with baths, getting wet, and having their comforting, natural scents replaced with kitty-shampoo smell and they hate the shower with a passion (and they’ll be happy to let you know with their claws!).

It all depends on the cat, but most cats dislike showers and if yours does not, then lucky you!

Should I lock my cat out of the shower room?

If your cat wants to come in, they are curious and worried, and the best thing that you can do is to simply let them come in. Some cats will come up to the door (click here if its sleeping near it) and meow when we shower or even walk in and watch us from the toilet. Your cat is just concerned about you when this happens and locking them out will likely just stress them, so it’s not the best idea.

From your cat’s perspective, you’re going somewhere where they can hear the splashing of water (yuck!) and when you come out, you don’t smell like them anymore. Cats rely on their sense of smell even more than sight, so some cats will even be a little startled the first time that you come out of the shower smelling like soap and shampoo.

Why does my cat watch me shower?

There are a few reasons why this may occur, with the first being simple amusement. Watching you is interesting for your cat and as we tend to shower the same time every day, it’s appealing for the schedule-minded cat to ‘pencil it in’ and attend this strange daily ritual of yours.

Other reasons might include the litterbox (if you keep it in the bathroom) or if your cat likes to use the bathroom as a hiding spot for the cool ceramic of the tub, then they might just be curious what you are doing in ‘their’ spot.

More often than not, however, they are just curious and looking to get your attention and they know you’ll be here every day at the same time.

Why does my cat just sit in the shower?

If there have been any recent changes in the house, such as new furniture or a new pet that has been brought home, then your cat might be hiding out in the shower. There is also the possibility that it is simply comfortable.

That said, if you have an older cat and you are worried then a vet checkup is a good idea to rule out the early onset of senility or feline dementia.

While your cat probably just enjoys the smooth, cool surface, if they are spending a large portion of the day in there then a checkup with the vet certainly won’t hurt and some testing can rule out any health issues of which this sudden seclusion may be a symptom.

Why does my cat try to get in the shower with me?

Your cat is just curious and trying to spend this part of the day with you. Some cats will get partially in the shower, just out of water range, and simply watch you and this is likely curiosity, concern for your safety, or both!

Some cats will even get in the water if they’ve gotten used to baths and the shower at an early age, so while this behavior seems a little weird, for some cats it is completely normal. Your cat is just curious and wants to spend a little time with you while you ‘groom’ yourself.

Sharing is caring, after all, so just have fun taking a shower with your cat. Not everyone gets this privilege!

Why does my cat rub against me when I finish in the shower?

Your cat has a number of scent glands all over their body and when you step out of the shower, you no longer smell like your cat – this will not do! By rubbing against you, your kitty is ‘marking’ you with their scent again and this is a sign of trust and affection.

It also makes your cat feel more comfortable when the house and everything in it smells like them. Cats are very territorial, so it’s quite common to see them rubbing up against furniture and the people that they love as their way of saying ‘I love this and this is MINE.”.

Is it normal for a cat to follow you into the shower? 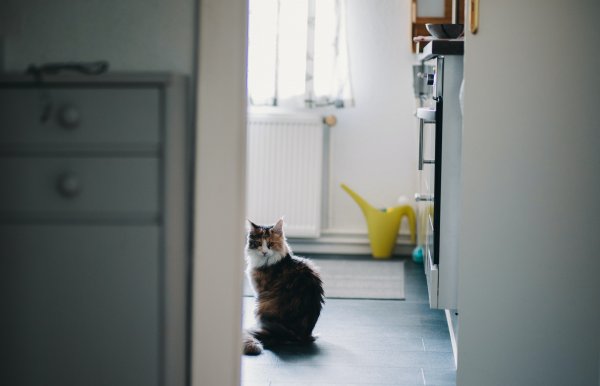 A cat in a bathroom staring out of the door.

Yes. Your cat is curious what you are getting up to in there and some cats even get downright worried, yowling at the closed bathroom door because all that they know is that you went in there and now they hear dangerous, splashing water!

Even if your cat isn’t worried, curiosity is a famously driving factor for felines, so your cat is just looking in on you with curiosity, concern, and probably a little amusement that you would subject yourself to water daily.

Why does my cat cuddle me after I shower?

In all likelihood, your cat knows that after the shower you are open to giving them attention, and they also get to re-mark you with their scents in the bargain. Cats are creatures of habit, just as most people are, and so your cat knows very well what time of the day you shower and also that you are happy to give them your undivided attention afterwards.

In some cases, they even like the soaps that we choose – scents are very important to cats, and you’ve got your own scent which is peculiar and interesting to them. So, your cat can mark you, get a whiff of your newly freshened scents, and a little affection in the bargain.

Do cats feel better after a bath?

That depends on the cat, but usually your cat is going to roll around on the carpet, jump into your comforter, and do everything that they can to dry off and to start smelling ‘normal’ again. That kitty shampoo that you are using might smell nice to you, but cats like their own scents and probably can’t wait for the kitty shampoo smell to wear off.

Some cats do actually like the feel of the water, but this is fairly rare. In most cases, your cat will be mildly or greatly irritated with you for getting them wet and messing with their natural scents!

Why is grooming so important to cats?

Grooming plays a huge part in a cat’s life. Not only does it help them to stay clean, but it’s also an important part of their socialization. Cats that live together and get along groom each other all of the time, and it is possible your cat is simply interested in your own grooming rituals.

Finally, it’s a tiny, comfortable space where they have your almost undivided attention!