Why Does My Cat React To Kittens Meowing? (3 Reasons)

Why does my cat react to kittens meowing?

Cats react to a kitten’s meow for several reasons. However, the main reasons are having concerns, curiosity, and instinct. If it’s the former, it’s concerned, it may be because it fears that the kitten may be in danger or needs urgent help.

So, now you know. But, why do kittens meow? Why do cats prioritize their response to some kittens? Do cats rect to immitation cat soinds? Keep reading for these answers, and much more…

3 top reasons why your cat reacts to kittens meowing: 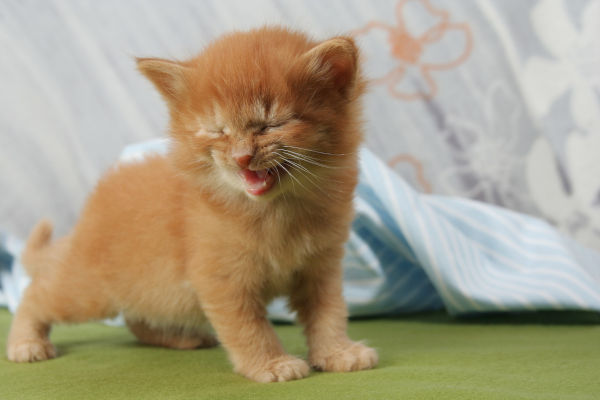 Earlier I mentioned a few reasons why your cat reacts to kittens meowing. Therefore in this section, I will explain each one in greater detail:

The main reason for a cat’s response to kittens meowing is it may be concerned. Meaning, it may worry that the kitten is in urgent need of help. Therefore, you will often see a mother cat prioritizing her response based on the kittens meowing.

This is similar to us humans. For example, if the mother has three kids, and one is crying loudly, while the others are merely wingeing. Her attention will likely be fixed on the first kid that is loudly crying. Because this kid seems to need her urgent response.

The other reason for this response is curiosity. Meaning, cats are curious by nature, regardless of a meowing kitten. But, when it’s a kittens meow it will take their curiosity to the next level.

You may have heard the saying: “curiosity kills the cat”. Well, it is quite a sad saying, to be honest. But, it, unfortunately, has some truth. Some cat’s curiosity can land them in trouble, especially from predators.

The last reason for your cat’s response is pure instinct. Meaning, mother cats in particular have an instinct to detect and respond to their kittens. It seems to be a natural survival response.

Therefore, when your cat hears a meowing kitten its mother’s senses get switched on and it will have to check out what’s happening.

Why do kittens meow?

Kittens use meowing as a form of communication. For example, they will let their mother know that they need food or a drink. However, this behavior seems reserved for kittens.

Why? Well, as they grow older, into adult cats, they tend not to communicate using meows to other cats. They will use it for us humans but not for other cats.

You may wonder why they continue to use it with us humans then, right? Well, the theory is they understand that we will react to them when they do this and it’s based on their version of a baby’s cry.

Why does my cat prioritize her response to some kittens?

Your cat, assuming it’s a mother cat, will prioritize their response to some kittens based on the urgency of their call. So, if there are many kittens in a litter, for example, 4, there will be a lot of voices.

So, the mother needs a method to work out who needs her attention more. Typically based on who meows the loudest. Obviously, the smart kitten could try to abuse this by continually meowing louder and louder. But, I assume kittens are not that complex to get this.

How do cats react to kittens?

Some cats react to kittens aggressively. But, others may accept them, but don’t seem that excited by them. Basically, a cat’s response varies based on the individual cat’s personality.

In some cases, assuming it’s a new kitten, there may be a defensive reception to the kitten initially. But, in time this could change as the resident cat gets used to it.

However, if there is any hissing or hostility it is important to never leave your kitten alone with the cat unsupervised until you are confident they get along.

Can playing the sound of other cats meowing harm my cat psychologically?

The sound of other cats meowing is not likely to harm your cat psychologically. Most cats tend to be curious about the sound, because it may sound familiar. But, once they identify where it comes from and establish it’s not another cat, they soon lose interest.

Cats may not be as clever as us humans. But, they are not silly. They will establish that the sound is not genuine and move on with their day.

Do cats react to imitation or recordings of cat sounds?

Some cats do react to recordings of cat sounds. However, there are just as many who do not. Therefore, it is dependant on the individual cat and their personality.

Often they will be curious about the sound and look over. But, will likely lose interest once it is clearly not what they thought it was in the first instance.

Why does my cat purr when she hears kittens?

Your cat may purr when she hears kittens because it relaxes her. Purring is often a sign of this, relation, and well-being. However, there are occasions where purring can be negative. But, in this context, in response to kittens, it is positive.

While kittens are young and reliant on their mother they will be happy to cater to all their needs. And, happily purr along with them. When they become older, it’s different, the mother will expect them to become independent.

What will a mother cat do if she hears the sound of a meowing kitten?

If a mother cat hears the sound of kittens meowing it is likely to become curious and search for them. The intention is to help them rather than hurting the kitten.

Once the mother establishes that the sound is not actually her kittens she is likely to rest assured and moves on. This is because her only focus, while she is nursing these kittens, is their safety and upkeep.

What are cats saying when they meow?

When a cat is meowing it is communicating with you. One of the top reasons for this is a request for food, especially if you are in the kitchen at the normal feeding time.

Other times it may be a request for you to let it out, assuming it’s an outdoor cat, and you have no cat flap (click here to see if it will go on a uPVC door) for it to let itself out.

If your cat keeps on begging to let out in this way it’s best to get a cat flap for them to save you having to let them out all the time.

There has been a study on male vs female reaction to kitten calls and it concluded that female cats react faster to kittens that show urgency in their call as opposed to a standard kitten call. Meaning they seem to respond differently to male cats.

Also, this finding shows that female cats seem to have an ability to decipher the actual emotion of the kitten which I can only assume is a maternal instinct.